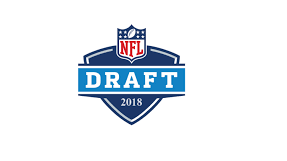 We are a day away from Christmas! I mean, we are a day away from the NFL Draft, which for some NFL fans like me, feels just like Christmas morning. The draft is the time where teams get to unwrap their shiny, new presents and even fans of the Cleveland Browns can feel good about their team.

I don't like to do mocks weeks or months before the season, but on NFL Draft Eve, it's definitely time to reveal my predictions. They don't call me Nostra-dumbass for nothing, so I'm excited to see just how bad these picks actually are!

Just a quick note before I reveal my picks. I didn't include trades in this mock. Trying to predict what teams are going to trade up or down is damn near impossible, so for the sake of this exercise, I'm keeping the teams where they are. If I had to predict trades, I think the Broncos and Tampa Bay are prime candidates to move down while Buffalo, Arizona or New England could possibly move up. So without further ado, let's get to the mock!

While there have been a lot of rumors that link Josh Allen to Cleveland, I think John Dorsey realizes that they can't afford to miss with this pick, and they go with the safer option in Sam Darnold. The Browns have more talent on this roster than many realize and Darold has the ability to maximize the talents of Josh Gordon, Corey Coleman, Jarvis Landry and David Njoku, without the "bust factor" that Josh Allen possesses.

Some may consider Josh Rosen cocky, but I think NFL teams will love his confidence.

It doesn't take this draft long to get interesting. The Giants could go with who many see as the best player in the draft in Saquon Barkley, the best offensive lineman in Quenton Nelson, or they could draft their quarterback of the future with this pick. I look at this way. The Giants are a team that doesn't expect to be drafting this high very often, so I expect them to follow suit the same way that Indianapolis did a few years back when they took Andrew Luck and take their franchise quarterback while they are in a position to do so. They can still get a very good running back in the second round and with selecting Rosen, they get a quarterback with the swagger to handle the stress of playing in New York.

The Jets didn't trade up to the third pick to take anything but a quarterback here. There are two options...Baker Mayfield or Josh Allen. With a wide receiver corps of Robbie Anderson, Jermaine Kearse, Terrelle Pryor and Quincy Enunwa, the Jets should value the accuracy that Mayfield brings to the table, rather the big arm that Josh Allen possesses.

I would completely understand if the Browns went the route of taking Saquon Barkley here, but with the addition of Carlos Hyde this offseason to pair with Duke Johnson, I think they take the best defensive player on the board in Bradley Chubb. Cleveland's defensive line with Myles Garrett on one side and Bradley Chubb on the other could be a force for years to come.

Saquon Barkley has all the tools to be a superstar at the NFL level.

The signing of Case Keenum this offseason allows the Broncos to go with the best player available and not be forced to draft a signal caller. Denver got rid of CJ Anderson and I'm going to be honest, Devontae Booker and DeAngelo Henderson are not the answer. Broncos...meet your new Terrell Davis!

The Colts better realize that if they want any chance at success, they need to protect Andrew Luck. Quenton Nelson is one of the most talented players in this draft and should be able to not only help keep Luck safe, but hopefully jumpstart their running game as well.

I think this is a prime spot for the Bucs to try and move down, but if they stick with this pick I think Minka Fitzpatrick is a great choice. They can move him around their secondary and fill a huge hole in their defense.

The Packers have Aaron Rodgers, Davante Adams and Randall Cobb. The Lions have Matthew Stafford, Golden Tate, Marvin Jones and Kenny Golladay. The Vikings have Kirk Cousins, Stefon Diggs and Adam Thielen. If the Bears want to slow down these offenses in the NFC North, they need to get stronger in their defensive backfield. After listening to several interviews with this kid, I think the Bears will get a great player both on and off the field.

With the future of Rueben Foster in serious doubt, the Niners not only would fill a need if they select Roquan Smith, but they get a linebacker who can anchor their defense for years to come. Their offense should be fun to watch next year, but if they can land Smith, their defense can help them become a playoff contender.

John Gruden should be able to get the offense rolling with the talent they have, so I have a feeling the Raiders will focus on improving their defense early in this draft. While Tremaine Edmunds is only 19 and extremely raw, he is a physical freak who has the natural ability to disrupt offenses on his own.

1.17 LA Chargers - Vita Vea, DT Washington. While I wasn't impressed listening to his interviews and worry about weight being an issue, Vita Vea has the size and speed combination to be a dominate run stopper that can provide a pass rush as well.

1.18 Seattle Seahawks - Mike McGlinchey, OT Notre Dame. The Seahawks have neglected their offensive line for too long and it's time to address it right here.

1.19 Dallas Cowboys - Courland Sutton, WR SMU. Sutton has the size and speed for the Cowboys to forget about Dez Bryant.

1.20 Detroit Lions - Darrius Guice, RB LSU. This was the result of my twitter poll as Detroit can use Guice as their early down back to pair with receiving threat Theo Riddick.

1.26 Atlanta Falcons - Jaire Alexander, CB Louisville. The Falcons shore up their secondary with Alexander who has the size and speed to excel in the NFL.

1.29 Jacksonville Jaguars - Will Hernandez, G UTEP. This pick helps solidify the offensive line in Jacksonville and can help take Leonard Fournette to the next level.

1.30 Minnesota Vikings - Taven Bryan, DT Florida. I'm tempted to go with an offensive lineman like James Daniels, but think Bryan is too good for the Vikings to pass up here.

1.31 New England Patriots - Hayden Hurst, TE South Carolina. Some think the Pats will look for Tom Brady's eventual replacement here, but I think New England's love for the tight end position wins out with this pick.

1.32 Philadelphia Eagles - James Daniels, C Iowa. Carson Wentz get some reinforcements on the offensive line with Daniels who they can plug in at center or guard.