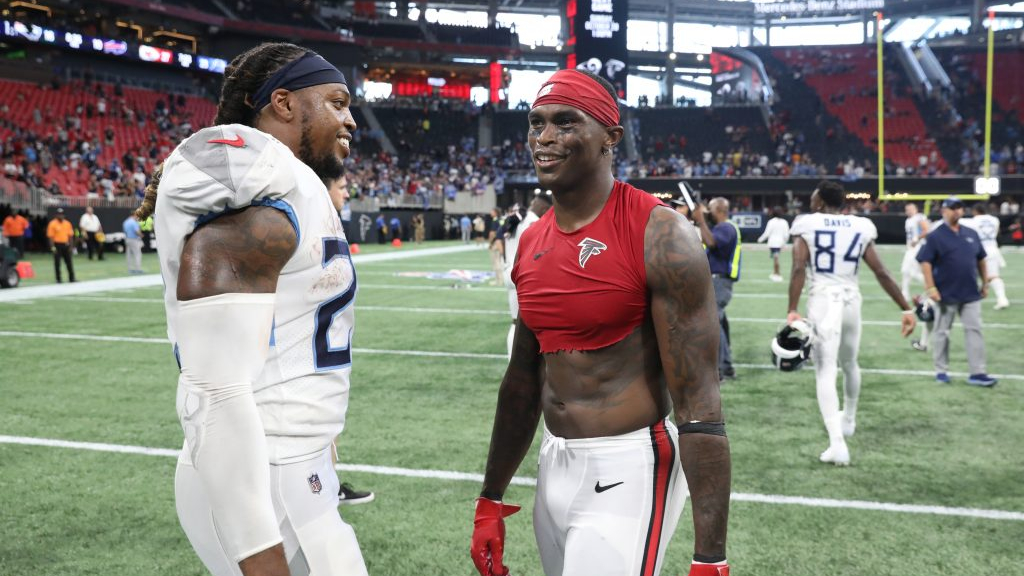 The beast that has called the ATL home for the last 10 years was finally shipped out of town to the Tennessee Titans for a 2022 second-round draft pick, a 2023-fourth round draft pick, and a bag of peanuts. Looks like Julio Jones did have the Falcons’ by the you know what, as he forced their hand to let the All-pro fly free from the Falcons’ nest. This move will have a lingering effect for the aforementioned Falcons and make a potent Titans offense even more dangerous heading into 2021. Let’s see which Falcons and Titans players will benefit or be affected the most from Julio switching teams. 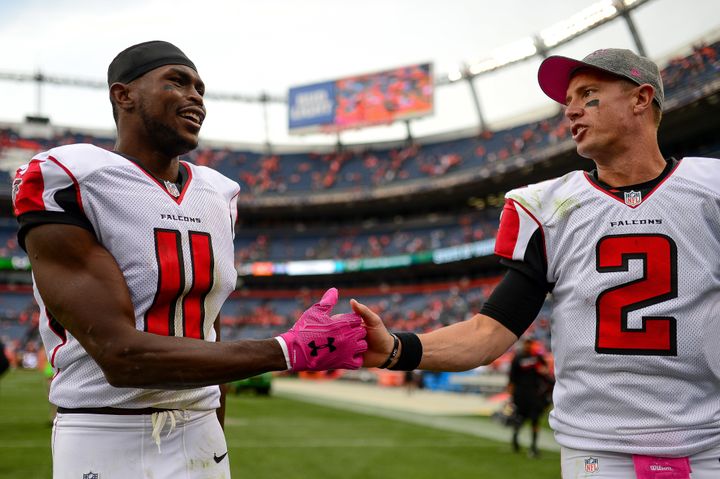 No one is going to miss Julio Jones more than Matt Ryan. Over a 134 game span, whenever Jones was in the line-up, Ryan threw for 39,204 passing yards, 242 touchdowns, and 99 interceptions, with a 97.8 passer rating. In the 25 games without number 11, Ryan has a passer rating of 88.6 and totaled 6,502 passing yards, and 39 touchdowns, to go along with 25 interceptions. Jones made life easier for Mr. Ryan, now let's see if the new blood in town can help the veteran quarterback maintain his fantasy football value. Matty Ice should provide low-end QB1 to high QB2 fantasy numbers for fantasy owners in 2021. 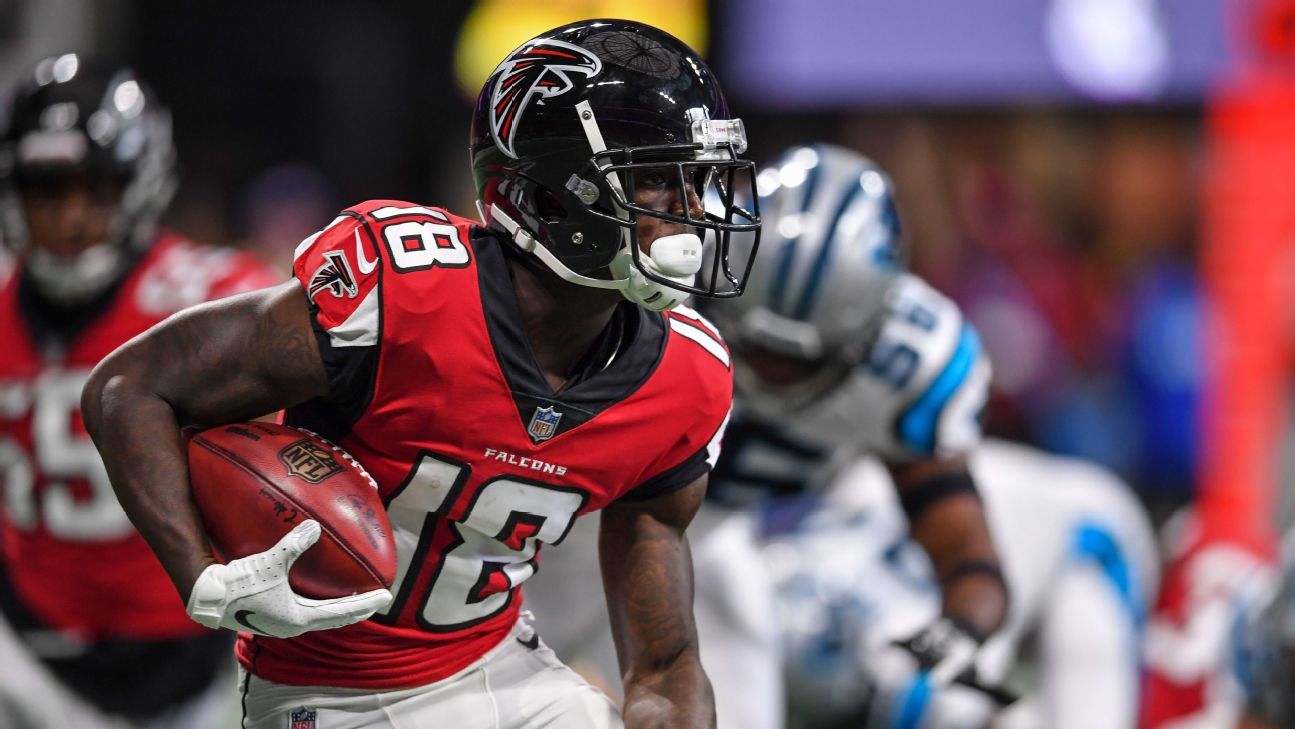 Ready or not Calvin Ridley is now the number one wide receiving option for the Falcons. Ridley has proven in the past that he can produce with or without Julio Jones in the line-up. Some fantasy managers may have tempered feelings about whether or not to pull the trigger on drafting Ridley on draft day because he will get assigned the number one corner each week from opposing defenses. Let’s take a look at last season’s stats to see how Mr. Ridley performed in either scenario.

Jones has averaged 132.6 targets per season over the last decade, making Ridley primed to have an increase in targets this season. The Falcons WR1 will be a top-10 wide receiver health permitting this fall and be a nice addition to fantasy squads around the 2-3 turn in fantasy drafts. By the time draft season rolls around he may end up in the mid-to-late second round ADP. 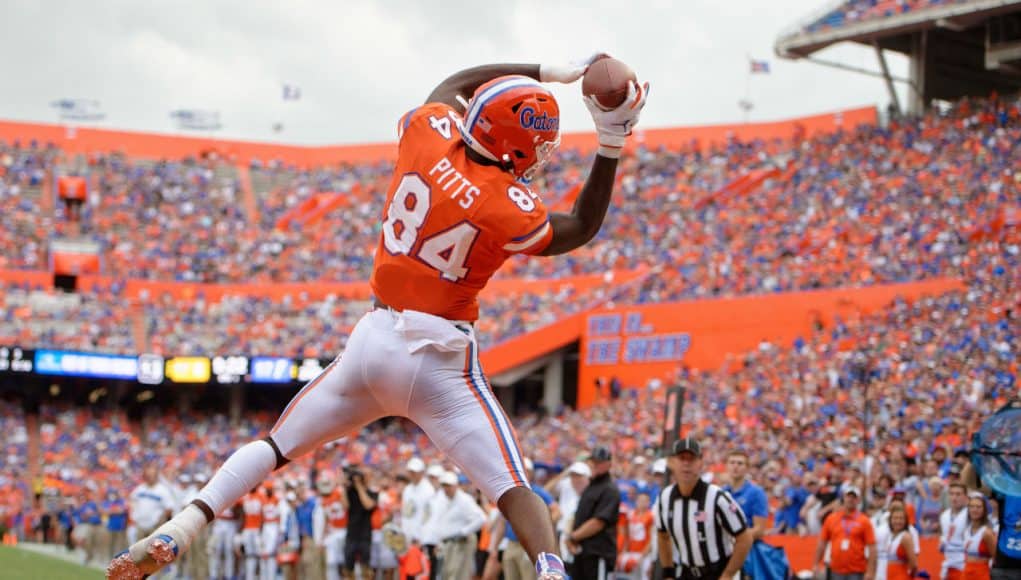 Ridley will not be the only receiving option that will prosper from the departure of Julio Jones. Rookie phenom Kyle Pitts is getting ready to be unleashed on the NFL in 2021. Over his last two seasons playing for the Florida Gators, Pitts destroyed his collegiate competition. In 21 games, Pitts tallied up 97 receptions for 1,419 yards and 17 touchdowns. The rookie tight end is predicted to shatter the notion that tight ends don’t produce in their rookie campaigns. Pitts is already being drafted as the sixth tight end off the board in drafts. He has a current ADP of 73, which is around the six/seven turn and it is sure to ascent as reports from Falcons camp start to trickle out. 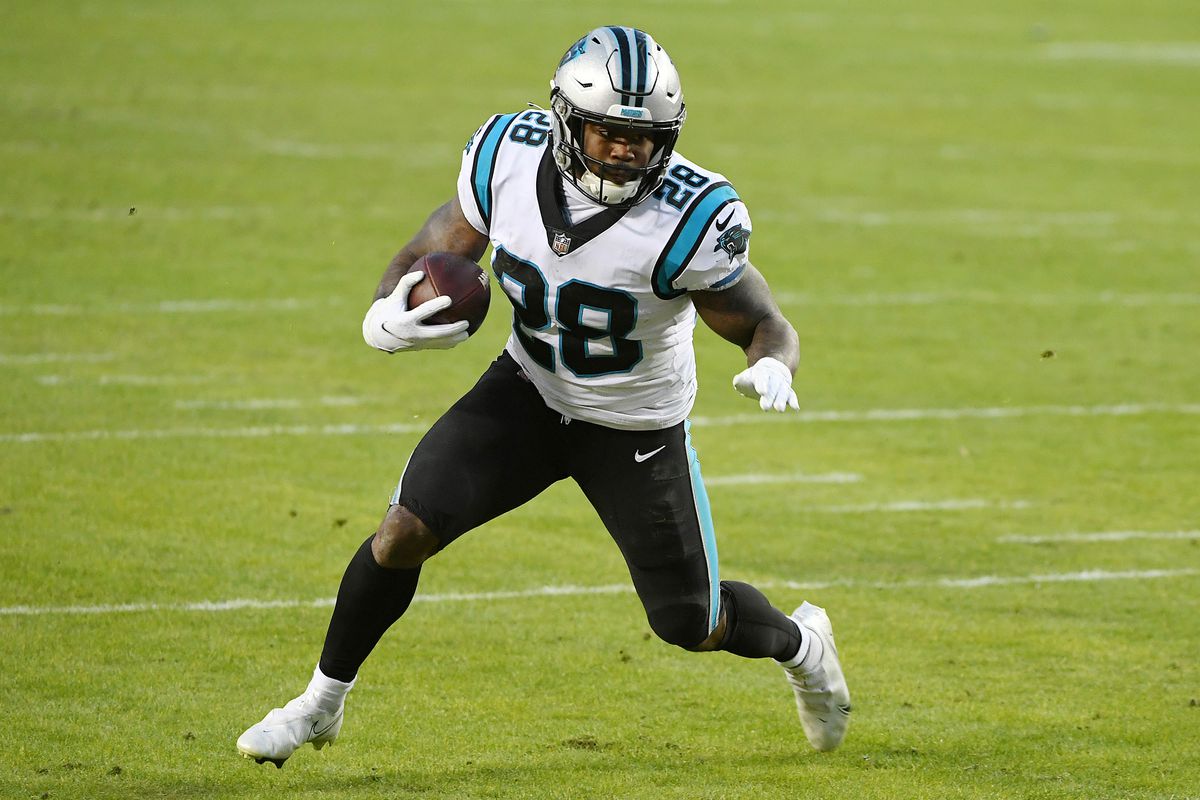 In terms of the running game, Jones made it a lot easier for running backs to find holes as he attracted plenty of attention from opposing defenses. In comes free agent Mike Davis, who was signed by the Falcons over the offseason. Davis had a career year last season subbing in for the injured Christian McCaffrey. The veteran running back provided 642 yards, and six touchdowns on the ground while adding 59 receptions for 373 yards, and two touchdowns through the receiving game. Look for the Falcons to possibly face more stacked boxes in running situations. Davis will have all the opportunity to run away with the starting job and be a possible low-end RB2 or high RB3 for fantasy managers this year. Davis has a current ADP of 74 and may rise during training camp.

In this section, I wanted to focus on what other pass catchers could emerge as possible third and fourth receiving options for the Falcons. When the Falcons go into two tight end sets, Hayden Hurts has proven in the past that he can perform and supply production when needed. Hurst may have some opportunity to make some plays with the defense focusing on trying to stop Pitts this year. Hurst is free in most leagues and usually isn’t even being drafted at the moment and should only be considered in deep tight-end premium and dynasty leagues.

What’s going to be interesting this offseason is to see which wide receiver on the roster comes out and takes the WR2 job for the Falcons. The contenders are Russell Gage, Olamide Zaccheaus, and rookie Frank Darby. Gage has shown glimpses of producing in the past but has also disappeared when having the chance to shine when Jones has missed game action over the last couple of seasons. Gage is the most likely candidate to be the WR2 and has a current ADP of 217. Gage should be drafted as a late-round flyer going forward.

As for Zaccheaus and Darby, these are two names to monitor during the offseason to see if any of the two can make strides in capturing the WR2 for the Falcons. Both players should be on dynasty managers’ watch list at this point and could be rostered in deeper dynasty leagues, especially Darby. 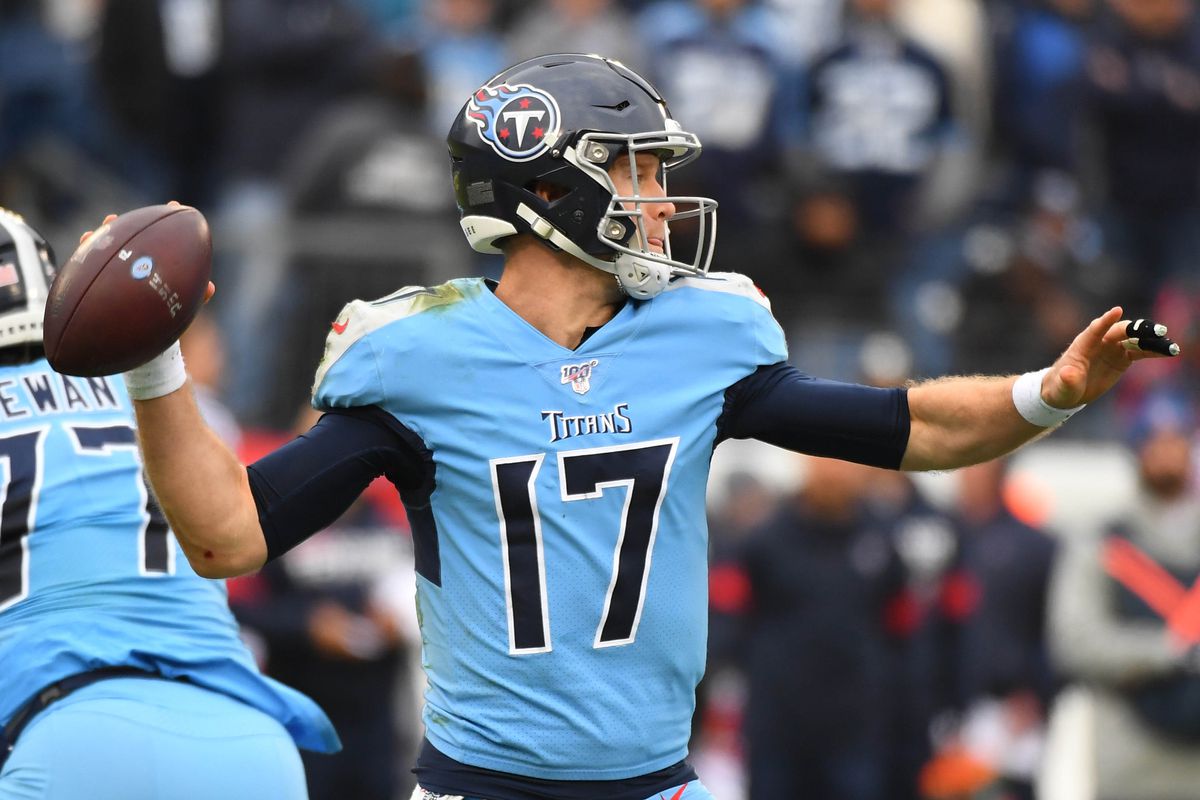 This is where the fun begins! If you look back at Ryan Tannehill’s Miami Dolphins tenure, you will see a quarterback that illustrated plenty of promise in his first three seasons with the team. He averaged 16 games, 4,055 yards passing, 25 touchdowns, and 13.6 interceptions. The following three seasons for Tannehill were a train wreck that was mired with injuries and bad play which led him to be traded during the 2019 NFL Draft. Tannehill was traded to the Tennessee Titans and had a chance for a fresh start starting the season as the backup quarterback to Marcus Mariota. Mariota started the 2019 season as the starter for the Titans but sure did not end the season as the starter. Since taking over as quarterback for the Titans, Tannehill has compiled 6,561 yards passing, 451 yards rushing, 59 total touchdowns, and 13 interceptions. Now with the addition of Julio Jones, Tannehill will easily post top 10 quarterback fantasy numbers this season. Tannehill is currently being drafted as the tenth quarterback of the board with an ADP of 80.8. 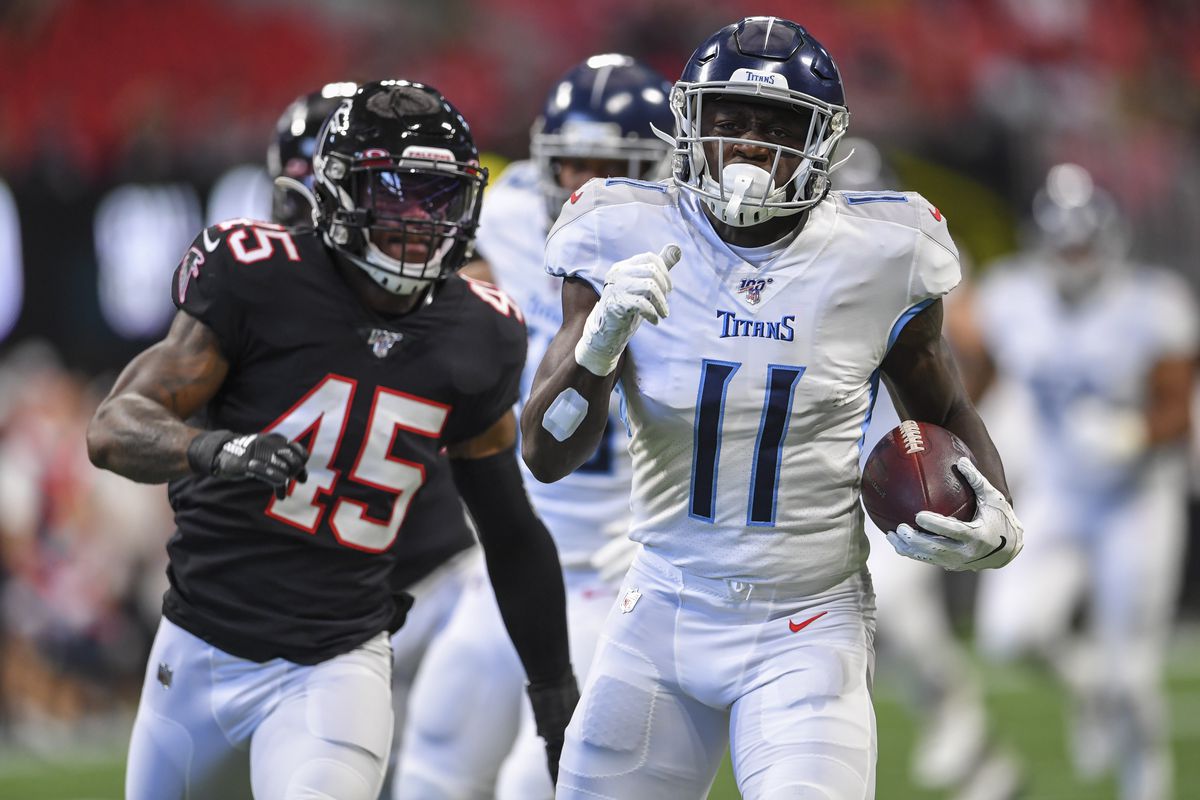 The biggest ripple effect of Jones joining the Titans has to be A.J. Brown’s target share moving forward. Over the last couple of seasons Brown and Tannehill have steadily built great chemistry making them one of the most wanted stacks in fantasy football. Prior to the Jones addition, Brown was being drafted in the high to mid second round. At the moment, Brown’s ADP has slipped to the late second round. In 14 games last year, Brown tallied up 106 targets to the tune of 1,075 yards and 11 touchdowns. Now you can look at Jones’ arrival as a problem or as a benefit to Brown’s offensive game. On one hand his total target share is more than likely to take a hit due to Jones warranting plenty of targets of his own, and on the other hand Jones is easily the best receiver that has lined up on the opposite Brown in this offense. This will create more space for Brown to do damage on opposing defenses. Brown should continue to be drafted in the second round for the rest of the summer and both wide receivers should be considered as 1A and 1B for the Titans, with Brown leading the way in the target share department.

Another benefactor of Jones coming to Nashville is Derrick Henry. Now Henry does not need much talking up as he was already considered a top five running back, but with this acquisition the running back is even more dangerous for opposing NFL defenses. There is less of a chance that defenses can stack the box against the Titans, making the offensive line ready to make some holes for the big man to smash through and break some long runs. Henry has quietly crept up to third overall in ADP and will be there all draft season long.

Before the trade went down there were two receiving options for the Titans that many considered to be late round sleepers. One was Anthony Firkser who I think is still an excellent option for those who miss out in grabbing one of top tight end options. With the departure of Jonnu Smith to New England, Firkser will remain a fixture in the Titans offense but Julio Jones will definitely affect Firkser's game in the redzone. The tight end should be considered an option for deeper leaguers, especially in tight end premium leagues.

The other receiving option on the roster that was severely affected by Julio’s arrival is Josh Reynolds. In 2020, Reynolds showed promise playing for the Rams as he caught 52 receptions for 618 yards and a couple of touchdowns. Earlier in the offseason Reynolds was signed to be the replacement for departed Corey Davis who signed with the Jets. This made Reynolds an interesting late round sleeper early on. The arrival of Jones was more like a tidal wave than a ripple, and has relegated Reynolds to more of a watch list player than draftable at this point.

A name to keep track of in deeper dynasty leagues is rookie Dez Fitzpatirck. In four seasons with the Louisville Cardinals, Fitzpatrick brought in 154 receptions for 2,589 yards and 21 touchdowns. Bringing in Jones will temper the rookie’s development, but he is a deep dynasty stash to see how he develops with the team.

No matter from which angle you look at it, the Julio Jones trade affected many players from both teams. His progression in the offense is going to be something to monitor this offseason. The years of Julio being drafted in the late first round or early second round are long gone. But nonetheless he will be a super solid WR2, with the potential to win your week on any given Sunday. The only thing that one has to be aware of is that Jones will usually be listed as questionable every week. So check his status weekly as he will surely be dealing with some sort of ailment on a weekly basis, although he normally plays through the pain.

If you would like to further discuss this or have any fantasy football questions please reach out to me on Twitter @smooth1074.