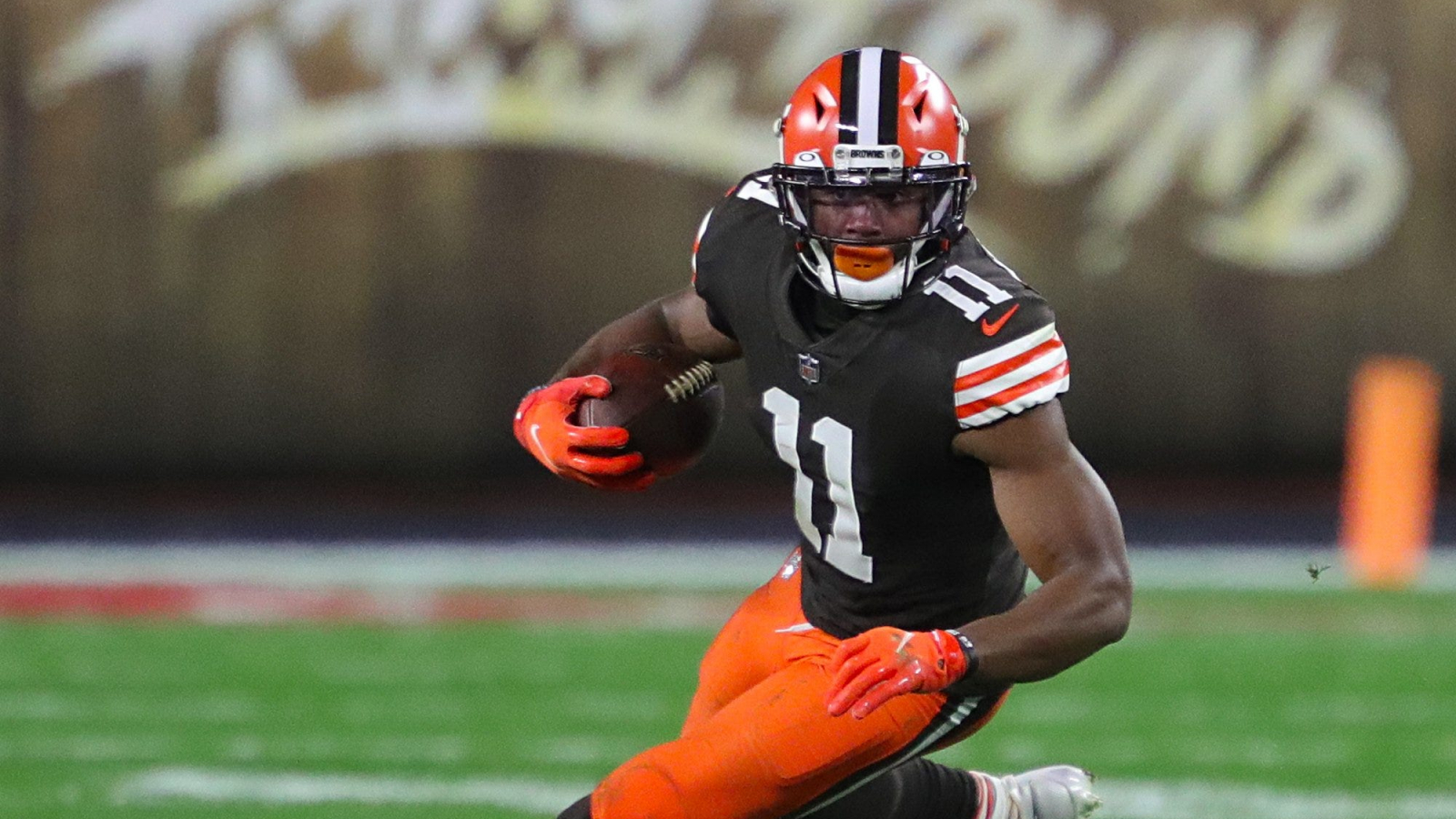 Admittedly, I'm a sucker for athleticism and players that boast elite or near-elite workout metrics. Sure, athleticism isn't the only factor to consider in real-life and fantasy football. However, sometimes we find deep sleepers based on position murkiness, post-hype prospects, and weak early production. Rarely do we have several players like DeVante Parker or Corey Davis, who break out in their fifth and fourth seasons.

One of the fun parts of fantasy football involves finding post-hype sleepers or players with sexy profiles that have a later ADP. These likely won't end up as players to rely on for the entire season but could provide some fantasy points and value via the waiver wire or weeks where you're streaming the position. That said, let's dive into a few wide receivers we find intriguing given their athleticism, speed, or previous boom weeks.

After a knee and ankle injury earlier in the 2020 season, Bryan Edwards failed to live up to expectations for the Raiders and fantasy managers. A third-round pick out of South Carolina, Edwards checked several boxes with a 17.8 (100th-percentile) Breakout Age, 48.4% (94th-percentile) College Dominator, and a 29.1% (88th-percentile) college target share. All elite numbers across the board, although he only recorded a 103.4 (79th-percentile) Speed Score. 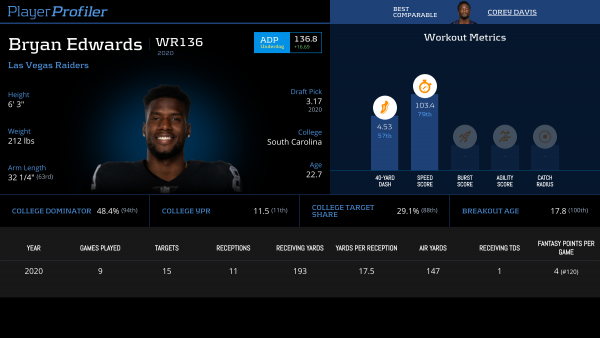 Unfortunately, Bryan Edwards barely received any snaps outside of Week 1 with a season-high 75.4% snap share. In Week 2, that trended downwards with a 61.6% snap share that fell to 42.6% in Week 3. From then on, Edwards didn't play until Week 10. One added concern, Edwards topped out at three targets, two receptions, and 51 receiving yards in two games.

However, context matters, and Hayden Winks of Underdog noted that we should consider yards per route run with teams that primarily run 2-WR or 3-WR sets. The Raiders ran 3-WR sets 48.2% of the time compared to 2-WR at 28.2%. We know the Raiders target tree tends to favor Darren Waller then trickles down to one primary receiver. Last season, Nelson Agholor ended up as that next wide receiver outside of Waller.

Unfortunately, Bryan Edwards holds an Underdog ADP as WR67 with a 141.5 ADP, which means savvy fantasy managers look like they're buying back into the rookie hype. Meanwhile, in FFPC leagues, Edwards sits at pick 174.9 or WR67. That means he goes around round 12-14 in 12-team formats. More often than not, fantasy managers will draft Edwards as a bench flier.

Bryan Edwards might’ve had the best catch of 2019🔥

In college, Edwards showed the ability to make contested catches and looks like a playmaker in space, meaning he's worth a flier as a post-hype sleeper in 2021 redraft leagues.

The Raiders rested Bryan Edwards in the first game of the preseason. However, from all reports, it isn't injury-related. Per The Athletic, Edwards is running with the first team in practice, which is a positive sign. 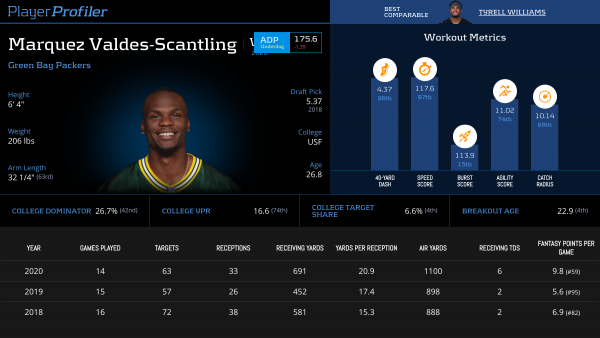 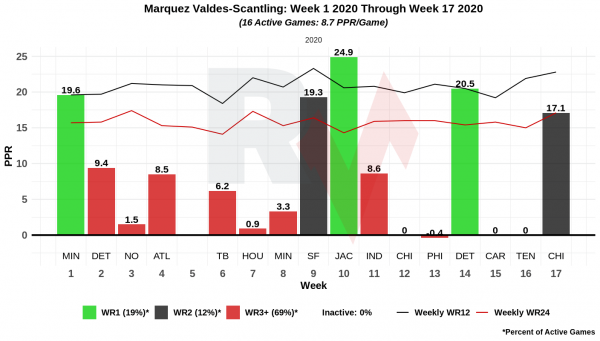 From all accounts, the Packers have a position battle going for their team WR2 that includes Marquez Valdes-Scantling, Allen Lazard, and rookie Amari Rodgers. Third-round rookie Amari Rodgers doesn't excite me from a prospect profile standpoint. Rodgers ranked in the 31st-percentile with a 23.5% College Dominator and 37th-percentile with a Breakout Age of 21 years old. Even Rodgers came in with a below-average 91.9 (43rd-percentile) Speed Score and 116.6 (27th-percentile) Burst Score. 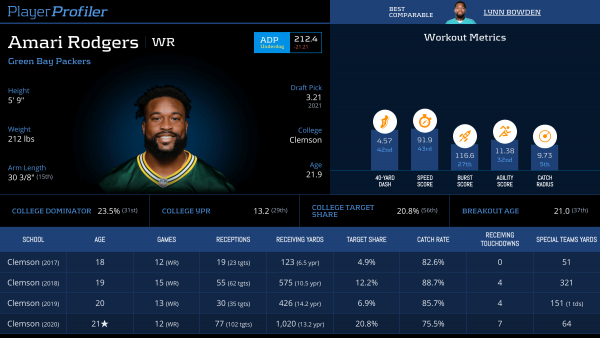 However, they also brought back Randall Cobb to work in the slot. With Aaron Rodgers, Cobb posted career-best numbers back in 2014 and 2015. Cobb's ADP jumped to WR68 inside the top-150 picks near Nyheim Hines, Evan Engram, Devin Singletary, and Sterling Shepard. I prefer other players going around Cobb, but it's a fair ADP if you believe Cobb will rekindle that fire with Rodgers.

Overall, the Packers' offense filters through Davante Adams and Aaron Jones, so we expect some frustration to figure out which wide receiver to draft. Lazard should provide a floor while Valdes-Scantling brings the risk and boom potential. Given Valdes-Scantling's 178.2 ADP on Underdog, it's a low-risk pick with boom potential evidenced by his 7.7 (No. 4) yards after the catch per reception and 17.5 (No. 2) air yards per target. Efficient receivers pair with efficient quarterbacks like Aaron Rodgers, so Valdes-Scantling won't need much volume to provide efficient production. 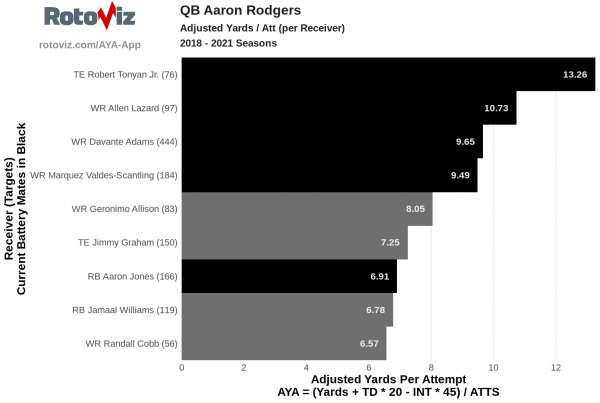 Marquez Valdes-Scantling didn't play in the preseason game. Interestingly, Devin Funchess led the team in catches (6), targets (8), and receiving yards (70), but it sounds like the Packers sat Valdes-Scantling and other starters in Week 1.

The second-year receiver for the Browns in Donovan Peoples-Jones looks to build upon some flashes during his rookie season. Like Marquez Valdes-Scantling, Peoples-Jones boasts an athletic and explosive profile with a 106.7 (86th-percentile) Speed Score and 145.2 (99th-percentile) Burst Score. 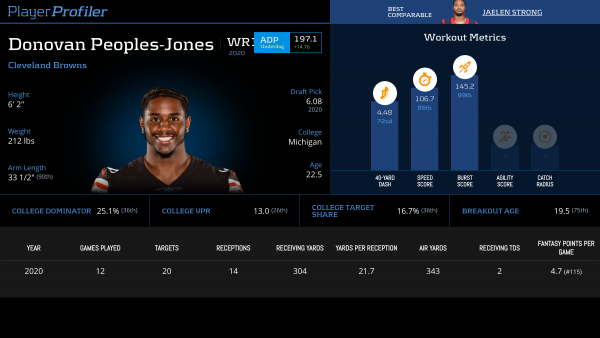 In games where Peoples-Jones played over 50% of the snaps, he made his playing time count. In those four games, Peoples-Jones finished with 11 receptions on 14 targets for 277 receiving yards. He also caught both of his touchdowns in two of those games. Unfortunately, Peoples-Jones didn't qualify amongst receivers, but he provided efficient production given his 15.2 yards per target and +70.4 Production Premium. Some of those efficiency metrics likely regress with more volume, but it's a positive note for Peoples-Jones. 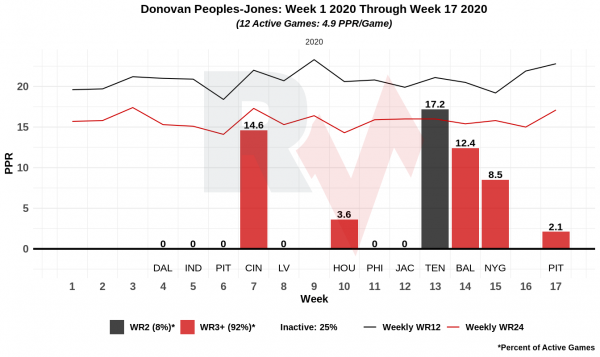 Since Cleveland relies on a run-heavy offense with their 30.9 (No. 4) Team Run Plays Per Game, the passing offense will need to rely on efficiency. In 2019, the Browns ranked 20th with 36.2 Team Pass Plays Per Game that dipped to 32.9 (No. 29) Team Pass Plays Per Game in 2020. Jarvis Landry and Odell Beckham Jr. expect to lead the team in target share. The Browns passing game sprinkles the rest of the targets between the running backs and tight ends with other secondary receivers.

All that said, Donovan Peoples-Jones likely won't receive a high target share, meaning he'll need to continue his efficient production. His Underdog ADP sits right outside the top-200 picks near D'Wayne Eskridge, Chuba Hubbard, Taysom Hill, and Jerick McKinnon. However, I expect Peoples-Jones to surpass his 5.9% target share during his rookie year.

Over the weekend, Donovan Peoples-Jones hauled in three of five targets for 26 receiving yards in their first preseason game. We continue to receive positive reports from Browns' training camp about Peoples-Jones, which adds more reasons for optimism as a deep sleeper.