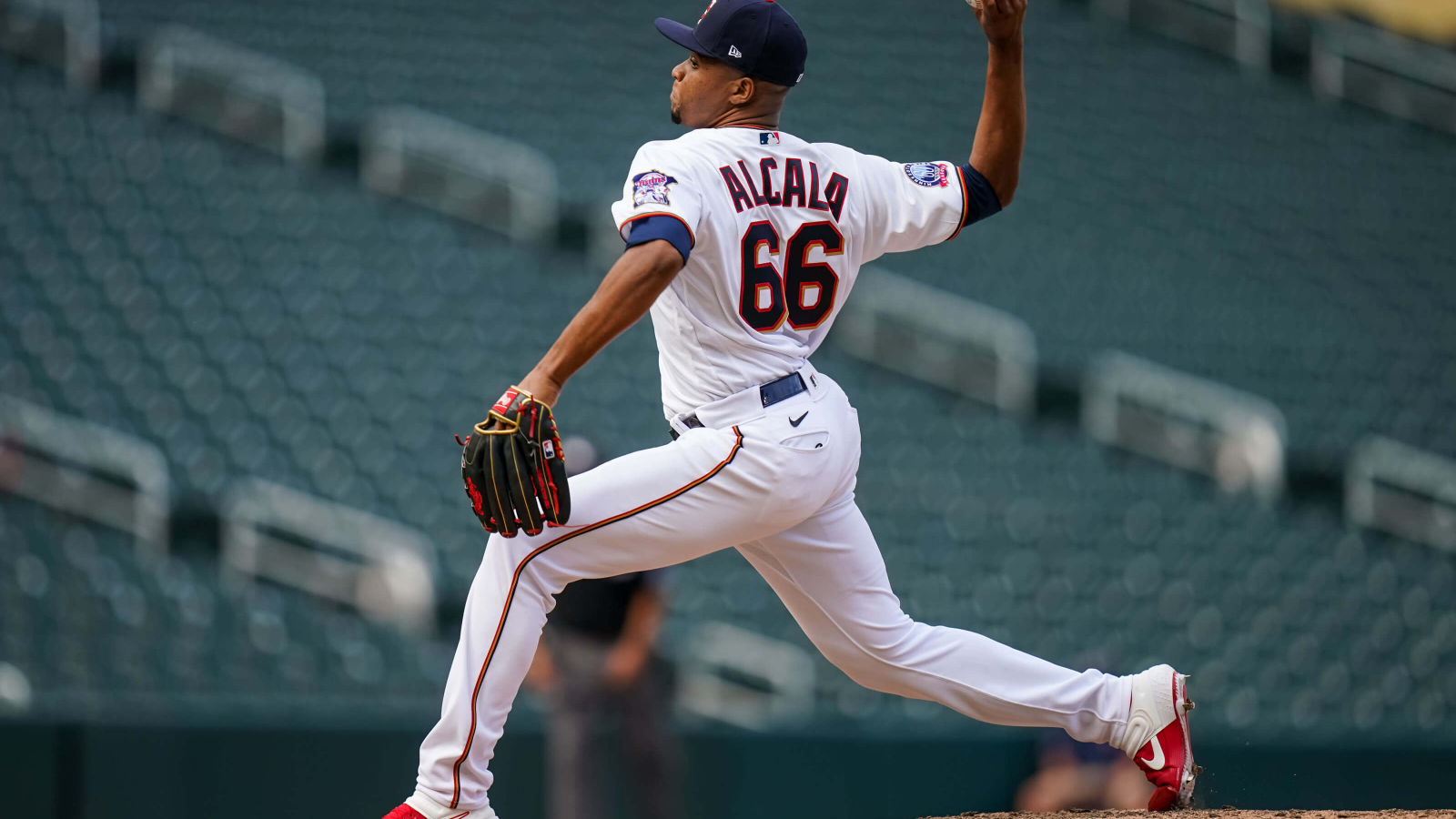 Many thanks to @DynastyOneStop for the help with pitch mix changes. Nathan helped sort through the different pitch types and identify pitchers with any changes. Based on that list, three intriguing names stuck out that happened to be relievers. With relievers, we're typically dealing with small samples. However, it's still notable data for these three relievers with increased changeup usage. We'll dive into the pitch usage, movement, and potential role in 2022. Bear with me as I hardly dive this deep into relievers. 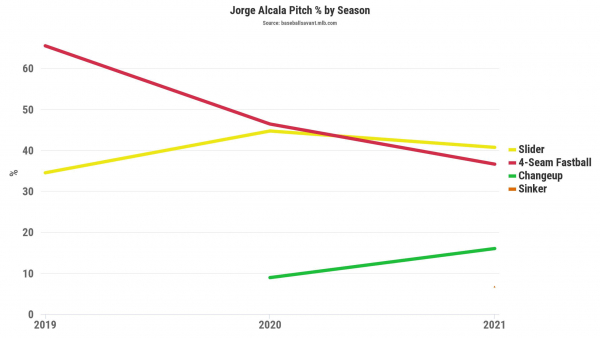 All four of Jorge Alcala's pitches result in above-average horizontal movement, most notably the four-seamer and changeup. Alcala's changeup maintained about 3.3 to 3.4 inches more than the average pitch. 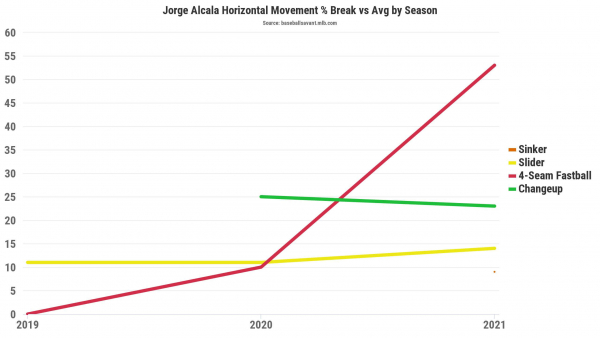 Meanwhile, Alcala's four-seamer added over three inches of horizontal movement from 7.5 inches to 10.7. Unsurprisingly, the swinging-strike and chase rates increased on all of Alcala's pitches, particularly the four-seamer. It's also notable that Alcala increased the zone rate on all of his pitches while eliciting swings and misses. 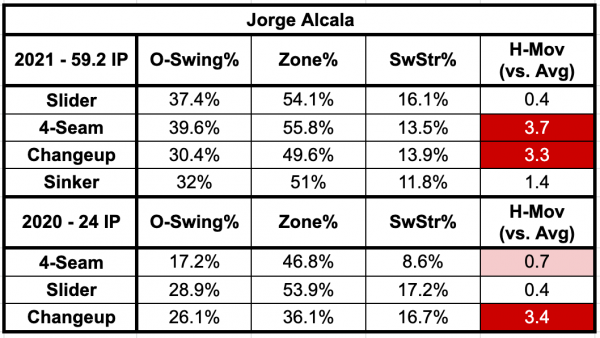 Although it's a larger sample in 2021, Jorge Alcala's underlying metrics and the increased changeup usage warrant intrigue in 2021. The question surrounds Alcala's role in 2022, with one save with four blown saves and 11 holds throughout his career.

The Twins look like a team attempting to retool after trading away José Berríos, Nelson Cruz, Hansel Robles, J.A. Happ, and Simeon Woods Richardson near the trade deadline in 2021. They still have a quality reliever in Taylor Rogers with 48 saves in 60 chances, 20 holds, 3.06 ERA, 1.12 WHIP, and 28% K-BB% from 2019-2021 (129.1 IP). If the Twins move Rogers, maybe Tyler Duffey and Jorge Alcala share save chances. In a Draft Champions league with 50 rounds, 15 teams, and no FAAB, keep an eye on Alcala around pick 400. Even in 15-team redraft leagues, he looks like an interesting speculative last-round pick. Jason Collette of RotoWire mentioned Alcala in his AL Central Bold Predictions too. 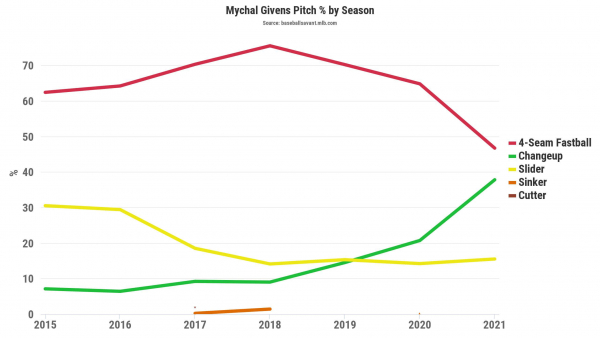 We want to note the decreased fastball usage in 2021 down to a career-low of 46.7%. Givens' four-seamer usage typically hovered above 62% of the time in the past six seasons. Givens played with the Rockies and Reds, and the changeup usage remained consistently high with both teams.

It looks like Mychal Givens adjusted the pitch mix throughout 2021, not just with Cincinnati. Interestingly, the K-BB% suffered, yet the home run rate and LOB% regressed. Although the ratios stunk with the Reds, Givens recorded eight saves in that timeframe.

As noted earlier, Mychal Givens adjusted the pitch mix from a four-seam dominant approach (64-75%) over the past four seasons to a four-seamer and changeup, accounting for 84.5% in 2021. Interestingly, with the increased changeup usage, the swinging-strike rate dropped to 9.7% in 2021, down from a career rate of 15.1%. However, from a wOBA standpoint, the changeup finished with a .227 wOBA, slightly better than the .282 wOBA from 2015-2020. Although Givens' changeup doesn't stand out movement-wise, it's still one of his most effective pitches. 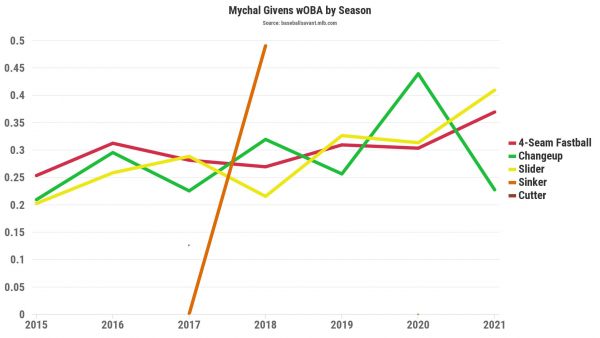 Depending on landing spot as a free agent, Mychal Givens could see the results on the four-seam and slider regress that only adds to the depth of his arsenal.

With Mychal Givens as a free agent, the early Draft Champions ADP sits near pick 670. Throughout his career with the Orioles, Givens garnered 20 saves in 2018 and 2019 yet blew 12 chances. This article isn't a recommendation to draft Givens but rather monitor the increased changeup usage to see if that carries over into 2022. Surprisingly as a reliever with a double-digit walk rate from 2019-2021 at 11.1%, the WHIP looks respectable at 1.25 during that span. The 9.8% walk rate and 1.17 WHIP look better than recent seasons. Overall, it seems the metrics should regress for Givens in 2022.

Codi Heuer's wOBA allowed on the slider at .192 and changeup at .175 aligned with the swinging-strike rate results. Meanwhile, Heuer's four-seamer got crushed with a .336 BA, .566 SLG, and .405 wOBA. For context, here are the league averages on four-seamers in 2021.

Like Mychal Givens, it's within the range of outcomes for Heuer's four-seamer results to positively regress. 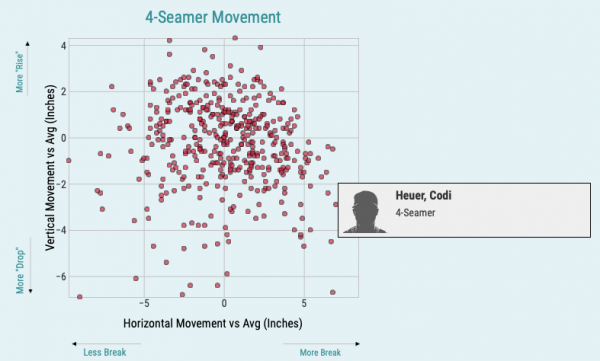 The movement profile for Codi Heuer's arsenal raises eyebrows, with the changeup and four-seamer having above-average horizontal movement. Heuer's four-seamer moves seven inches more than the average in 2021, with the changeup moving two inches versus the average changeup. Typically, we see pitches with above-average horizontal movement limiting hard contact. Although that's the case with Heuer, it's also eliciting swings and misses. 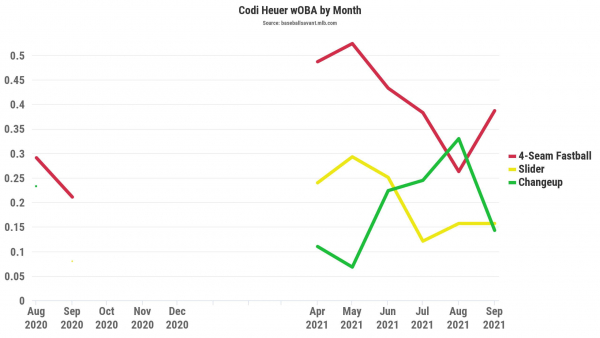 Heuer's slider also looks interesting, although it doesn't stand out movement-wise. It misses bats and results in a low wOBA, plus a -6 Run-Value in 2021. The slider deserves some further digging, but it's safe to wonder if his funky delivery impacts the slider results.

Although Rowan Wick receives the love, don't sleep on Codi Heuer - one of the players in the Craig Kimbrel deal with the White Sox. Heuer sits just inside pick 500 of the early Draft Champions ADP at 491. Right now, it's only worth drafting Heuer as a deep draft-and-hold type league. However, we'll want to monitor him as a waiver wire target for potential strikeouts and save chances with the arsenal. The stuff looks good.