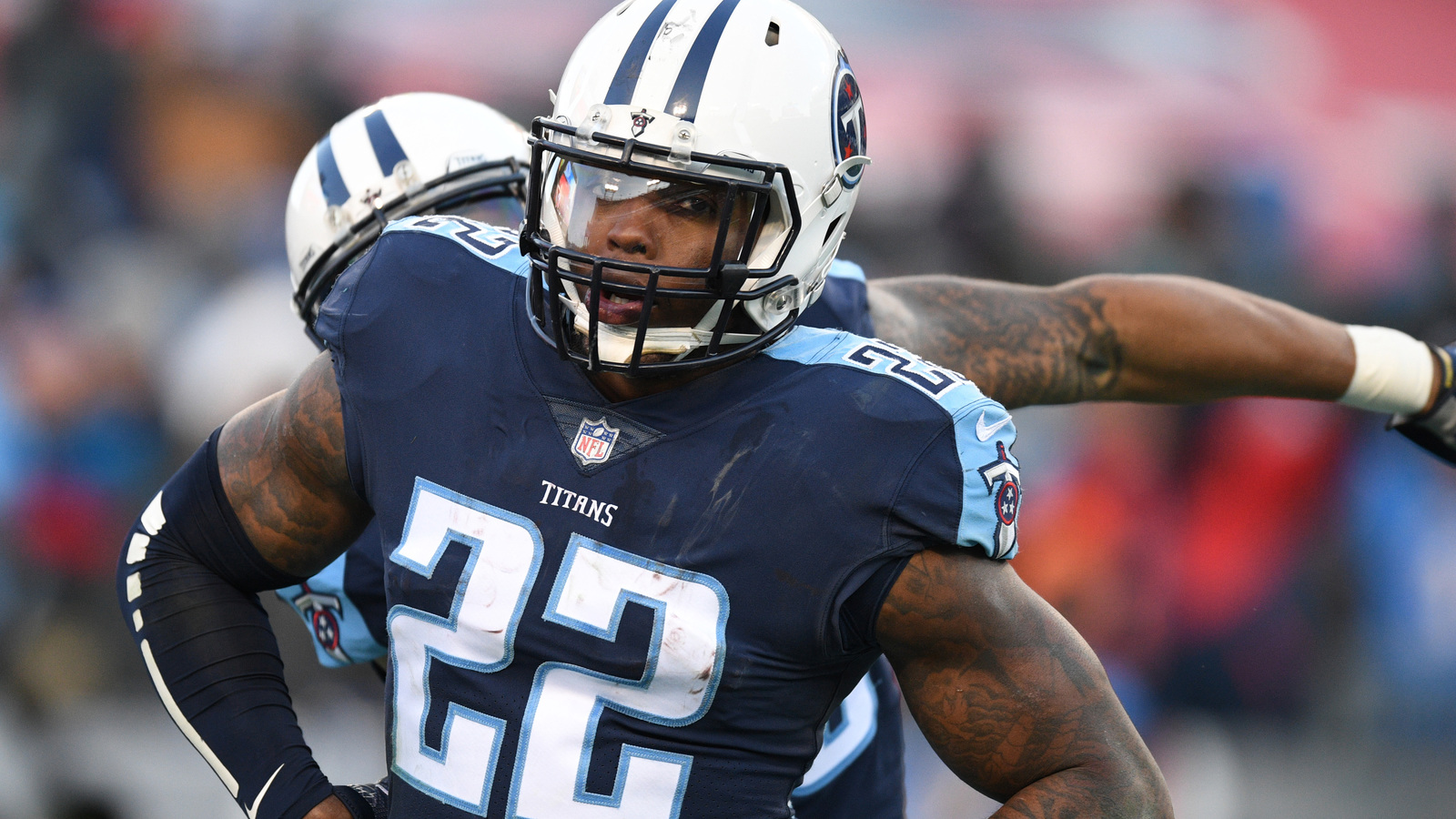 Three Rookies and a Vet go into a Bar

Using ADP has become a huge part of drafting and is constantly being monitored by many sites, all with varying results. But the one thing everyone needs to remember is that it should only be one tool in your arsenal and each drafter needs to be aware that each new draft will be different.

The four players listed in today’s question are all currently being drafted in the fourth round according to the Fantasy Championship ADP. The three rookies surround the one vet on the list, so I wanted to see what people thought of these four and who they would choose out of the tight group.

So let’s get to their responses.

Here are the responses to yesterday's Twitter Question of the Day #TQOFD: Which of these 4 players are you drafting at their current ADP and why? Derrius Guice, Rashaad Penny, Ronald Jones or Derrick Henry?

@RekedFantasy  - Derrius Guice. Washington has a solid oline (despite all the injuries last season). In terms of talent for me it's between him and Henry, but the situation for Guice is a little better. I think Dion Lewis is more of a threat than Chris Thompson.

Mark Spafford - Rashaad Penny, I think the team wants to take some pressure off of Wilson. Plus penny's competition has had their opportunities and didn't capitalize.

@mitchzimmer2018 - Of these, it’s Ronald Jones because IMHO, of these 4, he seems to have the best chance of breaking through a crowded backfield and becoming a three down back.

@JohnMillerNFL - Rashaad Penny, liked him as a prospect and Seattle invested a first-round pick in him despite having glaring needs elsewhere. Penny is an ok receiver and one of the best pure runners in the class. Seattle offensive line is bad, but Penny will see enough volume to make up for it.

@Truck1223 – Rashaad Penny because all the other rb had plenty of opportunities to prove themselves and all failed.

Jeff Green - I think that all these player's ADPs are too high. Guice's team isn't good enough to run the ball consistently. I'm not convinced that the others have locked up starting positions yet I did take Rashaad Penny with pick 59. I think that's a good value for him.

@RyanCFinley - Ronald Jones. I think he is being undervalued when you think about his opportunity and situation. He didn't go off at the combine (he was injured) and people have been way too rough on him. I think he's a real good football player - and that's important to me.

Adam Masseth – Derrius Guice I like cuz he'll get plenty of work and he's a stud, just doesn't catch much. Penny is a super all around stud and the Seahawks added to their oline and have a new oline coach. Most my mocks I've been taking Odell, Fournette, j Howard, j Gordon, R Penny
Or M Thomas, M Gordon, Diggs, D Guice, M Jones.

@Chase_Helms89 – Derrius Guice. He should be the best back in Was, and he should start to cut into Thompson's role too in time. Whether thats because of injury or play is up in the air.

@atJrose - Ronald Jones. Higher ceiling when you come from a stronger offense.

@opalgrant02 - Rashaad Penny. Best opportunity to succeed. Pete Carroll knows this offense needs an elusive RB to get back to where they were during their playoff runs. With P. Richardson & J. Graham gone, red zone opps will open up. I’m not sweating Chris Carson, UDFA who hasn’t proved anything yet.

@RyanAEarly - Ronald Jones. People are overemphasizing combine performance when he was injured, and he is in a really good spot. The Jamaal Charles comparisons are probably overblown. “Probably” being the operative word. Gambling on the upside at that ADP.

@LiddleSports45 - Derrius Guise I have his current ADP around 41 or 3.04 however you look at it. He has a solid chance to get over 1,000 yards on the ground; If he can beat out "Fat" Rob Kelley and Samaje Perine for the first and second down job. His pass catching is unproven with only 32 receptions in College. So it’s unlikely he will unseat veteran Chris Thompson as the third down back, but I still like him here; and thing he will be productive!!

Michael Bronte  - Derrick Henry would be the most likely, he's show just enough to have the faith he can handle the game if given more workload. I'm not sold on Mariotta as a great passer and with the loss of Decker and Murray, he will be more the safe go to than D Lewis. I'm a Lewis guy, but not so much in this system and the clock is ticking for an injury on him.

@cbleiler3 - Ronald Jones it seems like. it is purely on his adp and the way I structured my teams. He seems to fall to me when I’m looking for rb3 or best available and he stands out as both. So I take him. And furthermore if they are going to tell me as of today that they expect to give him 15-20 touches per game as a baseline I will take that as rb3 and the upside with the lack of consistent productive backs they have down there.

All four of these players have questions surrounding them. Of course with the rookies we just don’t know how much playing time they will get and with Henry you have to worry about how much work Dion Lewis will steal.

So let’s look a little closer at each.

Chris Thompson is a solid change of pace back and coming off a career year. He is also coming off surgery for a broken leg. If he is healthy he will be on the field most passing downs, which will leave early down work to Guice.

If Guice can hold up under pass protection he may even find himself getting some play as a receiver. Washington didn’t draft him in the second round to sit. If he gets close to 200 carries he should get close to 1,000 yards, or not.

Rashaad Penny may have a different fight.

Chris Carson was a 7th round pick in 2017 and started the season fairly strong, including a 90-yard performance against San Francisco. In fact it was the only time a Seattle running back eclipsed 90 yards rushing all season. During OTAs Head Coach Pete Carroll picked Carson as his stand out player, which only further complicates everything.

But don’t be mistaken, the Seahawks used the 27th overall pick on Penny to get him on the field and he will be given every chance to become the main back, but Carson could have something to say about it.

Ronald Jones is coming into Tampa Bay and is surrounded by mediocre backs Jacquizz Rodgers, Peyton Barber and Charles Sims. Barber seemed to be the guy at the end of last season and accumulated 416 total yards in the team’s last five games.

There are some that fear Jones’ lean frame isn’t built to be an every down back, but he is coming off a 275-touch season at USC in 2017. But if given even 12-15 touches a game he could be a solid flex play, but it’s hard to see him getting too many more touches than that.

Which takes us to the only vet on the list, Derrick Henry.

Henry split the backfield last year with DeMarco Murray, but outplayed Murray and that is one of the reasons Murray is no longer with the club. Henry averaged 4.2 YPC, as opposed to Murray’s 3.6.To replace Murray the team bought in Dion Lewis in the offseason.

Lewis is coming off his best season totaling over 1,100 yards last season in New England and averaging five yards-per-carry. Add in the fact that he is a much more dynamic receiver and Lewis could easily end the season with more overall yardage and fantasy points than Henry and you can get him at least a round earlier.

Based on everything listed above the person out of these four that I would draft in the fourth round is E. None of the above.

While there is a good chance at least two of these players hits and I am left holding the empty bag, there is just too many unknowns to feel comfortable drafting one of these RBs when there are solid wide receivers like Demaryius Thomas and Ju Ju Smith-Schuster still available.

I would most likely grab one or two top RBs in the first three rounds and look for WRs in round four. Then I would come back to running backs later and grab Tevin Coleman in the sixth or even Marshawn Lynch in the eighth. I have done over 40 drafts already and I don’t have any of the four listed backs on my teams. Buyer beware!


If you have any questions or comments you can reach me @Fantasytaz on Twitter.