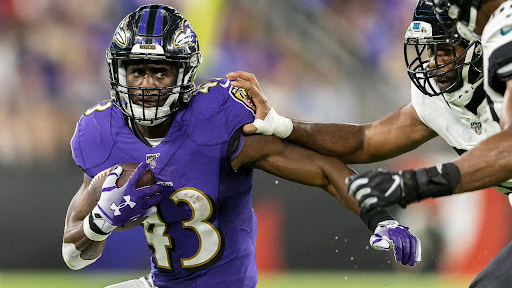 With the unfortunate season-ending injury to J.K. Dobbins, Gus Edwards steps into the lead role for the Ravens. However, Edwards already possessed sleeper appeal, so we'll dig a little deeper on the depth chart. We have the resurfacing of Justice Hill, a dynasty sleeper. Then we have an undrafted running back that looks interesting on the Ravens.

Often with the massive player pool in fantasy baseball, I'll ask myself who is Yadiel Hernandez or Connor Joe? Many players pop up that very few if at all, have heard of before yet provide fantasy value. It feels like that's the case with Tony Jones of the Saints. If you asked who? You're not alone because I had no clue of Ty'Son Williams or Tony Jones before this weekend. That said, let's do some digging to see what we find out.

With the J.K. Dobbins season-ending injury, Gus Edwards looks like he will take on the lead back role, particularly in the rushing game. The Ravens backfield boasted efficient production, and Edwards ranked highly with a 5.57 (No. 12) Yards Per Touch and 4.76 (No. 7) True Yards Per Carry. However, an overall efficiency metric like Production Premium, Edwards didn't rankly highly with -5.4 (No. 93) Production Premium last year. It appears that Edwards should thank the Ravens' offensive line given their 74.02 (No. 2) Run Blocking Efficiency. 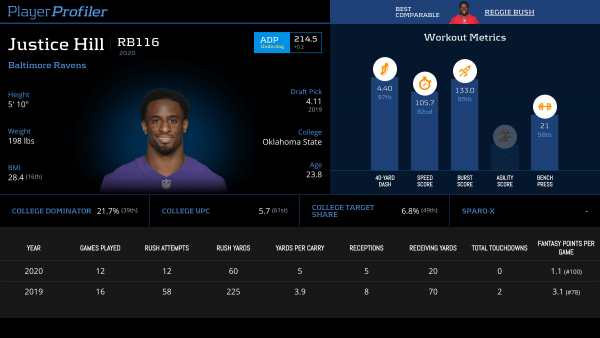 That said, we have a post-hype dynasty sleeper in Justice Hill, who ranked highly in several athleticism metrics. Hill's 4.40 (97th-percentile) 40-yard dash, 105.7 (82nd-percentile) Speed Score, and 133.0 (95th-percentile) Burst Score made fantasy managers drool over the potential.

However, unfortunately, Justice Hill only totaled 285 rushing yards and 90 receiving yards over the past two seasons. Hill's best performance came in Week 17 of his rookie year, where he finished with ten carries and one reception for 49 total yards and one touchdown. He lacked the opportunity, but now it appears Hill should share a bit of the Ravens backfield with Gus Edwards.

In 2016 and 2017 at Oklahoma State, Justice Hill rushed for over 1,110 rushing yards with a breakout season in 2017 where he earned an 8.7% target share for 190 receiving yards. In 2017, Hill finished with a 62% Rushing Market Share and a 67% College Dominator Rating. Using the RotoViz Prospect Box Score Scouting Tool, Justice Hill's top comparisons include Travis Homer, Lamar Miller, and Joshua Kelley. 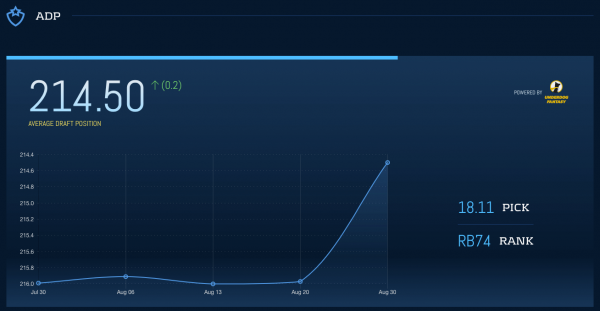 Given that Justice Hill's ADP may jump up, make sure to not overreach for Hill, although we like the athleticism profile. However, if you're doing a draft a few days after the J.K. Dobbins news, Edwards' and Hill's will have likely adjusted by then. Hill looks like a wildcard that could fulfill that Ravens' RB2 role, which provided some flex or RB3 type value over the past two seasons. However, the undrafted rookie in Ty'Son Williams, who we'll discuss next, may have some sneaky deep-league value.

On Sunday morning, we figured many would tout Gus Edwards. However, after chatting with our buddy, Brian Drake, he reminded me that the Ravens have this sneaky undrafted free agent in Ty'Son Williams to consider. 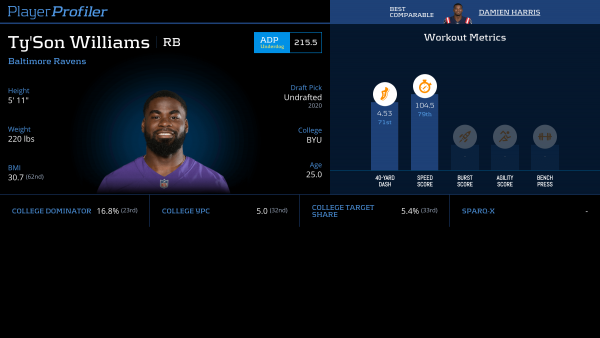 After that, I decided to dig into Williams' profile that boasts a 104.5 (79th-percentile) Speed Score with a 4.53 (71st-percentile) 40-yard dash given the 220-pound frame. Although the college production may not look great, Williams looks to have a similar profile to Gus Edwards with the tackle-breaking ability with some sneaky speed with a 6.25% (No. 7) Breakaway Run Rate.

For those who want to know a little more about Ty'Son Williams in case that projected signing of a veteran isn't as big of a deal as believed.

Waldman notes Williams uses a wide base, can break tackles, and finish strong. I lean on folks like Matt Waldman for the video and film analysis since I'm typically digging into the numbers.

That said, don't overlook Williams' lack of college production and brush over the sleeper appeal. If not, put him on the watch list. Unfortunately, Williams suffered a torn ACL that ended his 2019 senior season at BYU. However, Williams turned heads in the preseason. According to Jamison Hensley of ESPN, the Ravens recently put Williams behind Gus Edwards on the depth chart.

If you already drafted, speculate on Ty'Son Williams as a running back to stash. Both Hill and Williams provide that unknown factor that warrants some interest if some have hesitations.

Admittedly, Tony Jones falls into a group of players, where I asked myself who the heck is that guy. Latavius Murray typically held the Saints backup running back role, but reports came out via The Athletic that he's fighting for a roster spot. In Week 1 of the preseason, Murray had five carries for six rushing yards with one catch for 11 receiving yards. Meanwhile, Tony Jones exploded for seven carries, 82 rushing yards, and one rushing touchdown. Jones also hauled in all five of his targets for 38 receiving yards.

It would seem surprising for the Saints to cut Murray since his contract runs through 2022, making just under $3 million per season. However, at 31 years of age, the Saints may trade the veteran to a needy running back team. 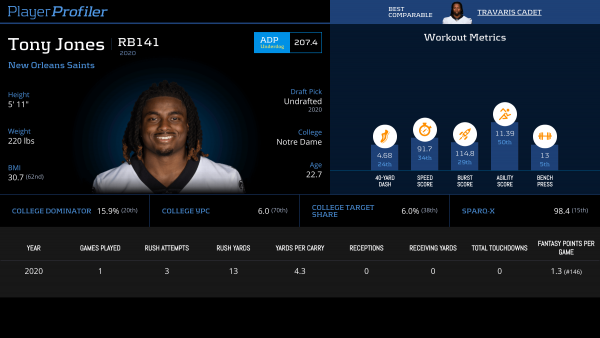 Given the low college production, it's hard to find any exciting comparable players using the Prospect Box Score Scouting Tool on RotoViz. Some names include Gary Brightwell, James Charles (not Jamaal), and Carlos Davis. 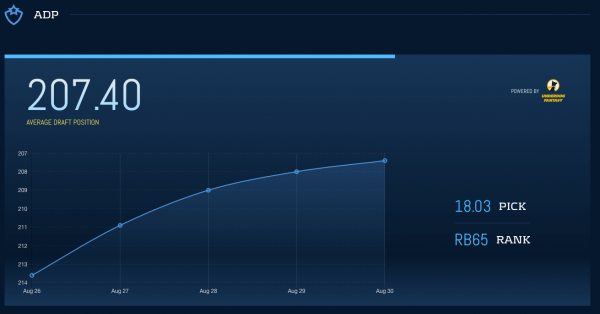 Given the mentions and preseason flashes of Tony Jones, his Underdog ADP increased a tiny bit right outside the top-200 picks. In FFPC leagues, Jones goes inside the top-200 of ADP at 185.9. Although Jones hasn't shown the receiving ability in college with a 3% receiving market share, he hauled in six of eight targets for 42 receiving yards in both preseason games.

Is it within the range of outcomes for Jones to earn some receiving work if the Saints move on from Latavius Murray? Sure, but if Murray isn't in the picture, expect Alvin Kamara to explode, given the elite all-around talent and skills.

Verdict: Only consider stashing Tony Jones in deeper leagues with roughly 200 players rostered. Prioritize one of the Ravens' backups in Ty'Son Williams or Justice Hill over Jones, given the separation in ADP and talent.