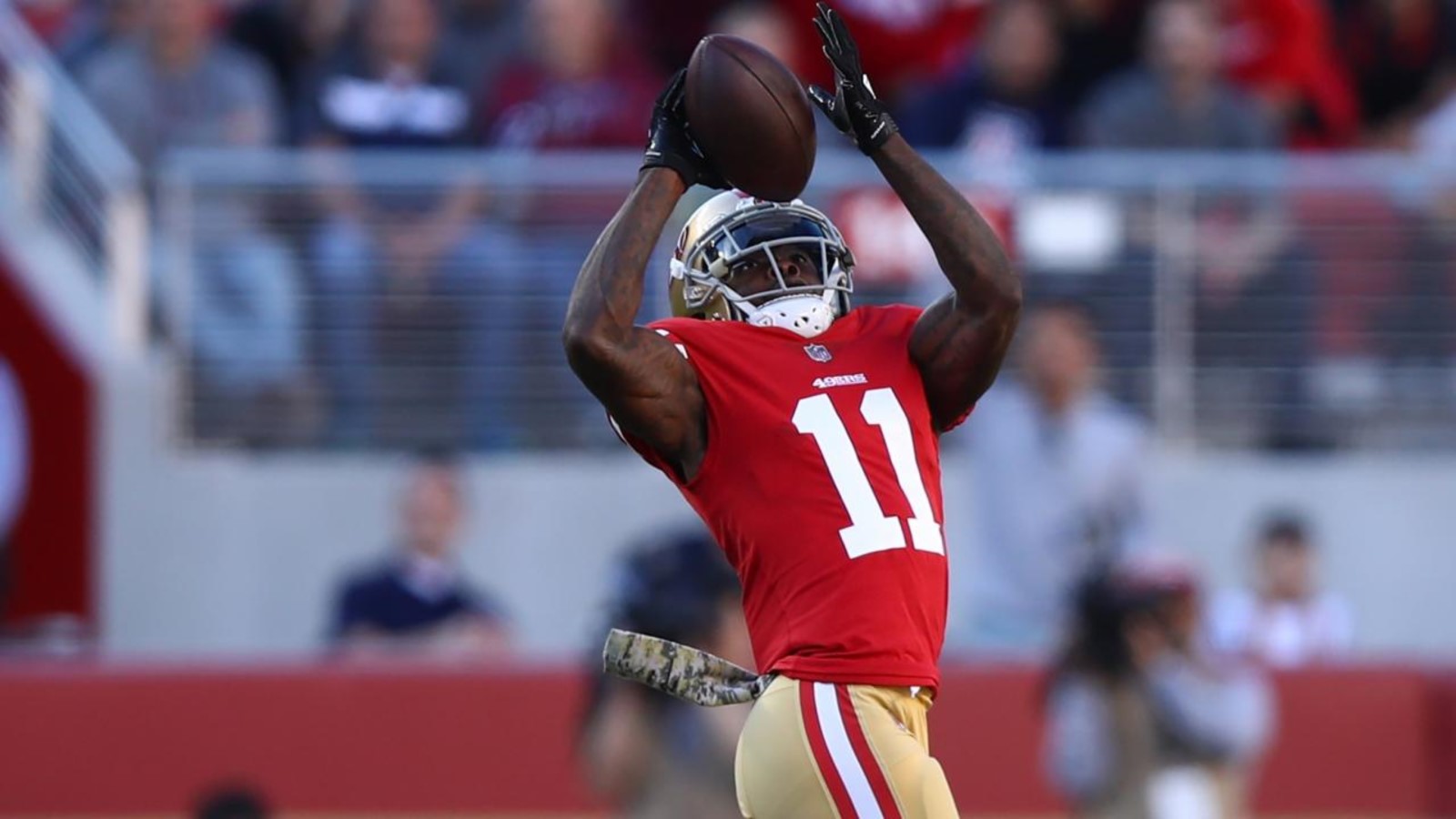 Here are some notes from around the league for Friday, July 27th.

On Friday morning, Mahomes had a few hookups deep down the field to Tyreek Hill that had the crowd cheering, and there were some intermediate routes mixed in there as well that showed his ability to attack every level of the defense.

There were some beautiful connections and there were also some misses—whether that’s on the throw or the person running the route—only those on the field know for sure, but the product isn’t finished and nobody should expect it to be at this point.

Early candidate for play is the day: Davante Adams leaps and high points a deep ball from Aaron Rodgers against tight coverage from Davon House. Adams and Randall Cobb have made big plays the first two days but Packers still looking for depth at WR.

WR DeAngelo Yancey gets a chance to run with the 1s and takes advantage of the opportunity when Rodgers rockets one to him on an out. Nice job getting open, securing the catch and getting upfield.

WR Randall Cobb spoke with reporters today. Acknowledged having ankle surgery 6 wks ago to remove small piece of cartilage that was causing some discomfort. “Feels great” now. Watched him run yesterday at practice and he looked great, not like a guy coming off surgery.

With the understanding that it’s only day 2 of training camp, there was some excitement Friday for the Dolphins and now, 35 year old veteran running back Frank Gore.

Gore is having a homecoming in 2018 after having grown up in South Florida and starred for the Miami Hurricanes in the early 2000s. He was available, when the Colts did not re-sign him after a dismal 2017 season for Indianapolis.

And in Miami’s second workout Friday, the “wows” began to roll in from Dolphins media in Davie on what they saw from Gore:

Adam Gase is right on, 35-year old Frank Gore still got moves, breaking off a big run in 11 on 11 at day 2 of #Dolphins Training Camp.

>> A deep crossing route to Eric Ebron that picked up a nice chunk. Luck threw over a defender and allowed Ebron to catch the ball in stride for a big gain.

>> A back-shoulder throw to emerging camp star Deon Cain, on which Luck threw the ball with precise placement that allowed Cain to go up and make a highlight-worthy catch in midair versus cornerback Kenny Moore.

>> A deep out route to Ryan Grant on which Luck dropped the ball right over safety T.J. Green, where only Grant could catch it (which he did).

“I think (Luck) has gotten more crisp,” coach Frank Reich said before practice. “You’ve got to have a snap and a crispness to it. When you’re rehabbing through an injury, there is a little bit where it’s just not as crisp. And we’ve seen that get better and better. As good as I think (Thursday) was, believe me, I think there is a lot of room to go to get even better. What happens is, when you get in a competitive situation, all of a sudden you see an opening on a pass and you have to get it there and you have to put a little more juice on it. And it’s hard to simulate that on air when you’re rehabbing. And we saw that.”

Sixth-round pick Deon Cain made his presence felt for a second consecutive day Friday, making two of the day’s most memorable plays.

Cain’s first highlight came when he made a diving catch on the sideline from Jacoby Brissett, eliciting a raucous cheer from the assembled fans. Cain later hauled in the aforementioned back-shoulder catch from Luck, perhaps the day’s most impressive feat.

The trick for Cain now will be to continue making plays when the pads go on. He’s gaining confidence from his performance this week and he already seems to have the right attitude.

Later in the session, Carson Wentz came back on the field with the first-team offense and it didn’t take long for him to make a big-time throw. The third-year quarterback dropped back and smoked a throw between both starting safeties to Zach Ertz down the seam on a double move. His Pro Bowl tight end obliged with a beautiful diving catch well beyond the first-down marker.

Foles felt a potential blitz coming and got the ball out quickly in the flat to Nelson Agholor, who raced down the sideline untouched for what would have been a huge play. Darby was the nearest defender in pursuit up the sideline, but I was surprised to see that the next defender behind him was Derek Barnett, hustling downfield after the catch-and-run.

Markus Wheaton came up with a really nice sideline catch today in which he was able to keep both feet in bounds. Wentz found Wheaton behind the corner and in front of the safety in the vulnerable area of the Cover-2 defense on the play. While some quarterbacks really struggle making that throw, it's no issue at all for Wentz, even as he still recovers from his injury. In other words, Wentz's arm strength is not an issue in the slightest.

We should probably mention that Mack Hollins is getting a lot of first-team reps with Alshon Jeffery on the PUP list. There's isn't too much to note there, good or bad, but it has to be a confidence boost for Hollins to be playing every down with the cool kids.

Ross, who missed most of last season after the Bengals selected him in the top 10 of the draft, wowed onlookers with his big-play ability down the field.

At one point, Ross hooked up with Andy Dalton for a 50-yard bomb after beating Dre Kirkpatrick:

Whether he’s making deep plays or otherwise, Ross putting on a show right now is a good sign after his rookie summer was marred by injuries and setbacks.

No setbacks here. It’s only basic drills right now, but Ross is showing why he was a top-10 talent.

Hard to match speed of Tavon Austin or Deonte Thompson, but Michael Gallup looks about as fluid and explosive in his routes as any WR out here. Beasley has no wasted motion at all with his movements. #cowboyswire

It was an ominous sign seeing rookie running back Ronald Jones drop a very catchable ball in 7-on-7. Jones was five yards away from the quarterback and the ball hit him in the hands. He has to make that catch.

Jones has suspect hands. There is no other way to say it. He’ll make a few catches and then drop one you think he should have caught. This has been going on since the rookie mini-camp and through the OTAs. Keep in mind that Jones only had 32 career catches in his three-year career at USC. Peyton Barber, Charles Sims, Jacquizz Rodgers and Shaun Wilson all have better hands than he does, and that’s a problem because how Jones performs in the passing game will determine if he can be more than a two-down back in Tampa Bay during his rookie season.

I spent some time watching the tight ends in their various drills and I can say with great confidence that, in terms of running routes, Blake Jarwin is the best of the bunch, with Dalton Schultz a solid second.

Jarwin is quick off the line, has great body control in and out of cuts and catches the ball with authority. I was happy to observe that Schultz catches the ball easily and naturally; in a two-minute drill against air, he ran a corner route that required him to catch the ball over his left shoulder, and he made it look easy.

The less good news on this front is that Rico Gathers was by far the worst of the bunch.

He lacks explosion and dropped a couple of balls that hit him right in the hands. Most condemning, to my mind, was Gathers’ lack of body control; he struggled to stay above his feet when cutting and therefore had difficulty getting out of his breaks.

As a result, he tended to round off the routes that Jarwin ran crisply. Obviously, I’m working from a small sample size but, based on this one day, I’d be shocked if Gathers makes the roster.

With such a large crowd, fans got audibly excited when quarterback Jared Goff hit wide receiver Brandin Cooks with a deep pass down the left sideline. It was a nice ball, but it should’ve been — the offense was going against air. Those are the plays that should work, and in this case they did.

Also in one-on-ones, wide receiver Robert Woods made a nice move to shake cornerback Marcus Peters and then made a nice catch in the middle of the field. That’s not easy to do with an elite man coverage player like Peters.

Later in the session, Goff connected with tight end Gerald Everett on a ball deep over the middle. Everett had to stretch out to make the catch, which was fit into a tight window to evade double coverage. Everett has flashed a bit over the first two days of camp, making a number of receptions on the first- and second-team offense.

During 11-on-11, Cooks made a nice catch over the middle that also drew some cheers from the crowd. This one was a bit more impressive since Cooks had some competition aside from the air — Peters was draped all over him. An “iron sharpens iron” situation, to be sure.

Before CB Ahkello Witherspoon left the auditorium, a reporter asked him which 49ers receiver is the toughest to cover.

“Marquise Goodwin,” Witherspoon said right away. He didn’t have to think.

During Garcon’s absence last season, Goodwin became the 49ers’ go-to receiver. And he still is their go-to receiver. Jimmy Garoppolo throws to him more than anyone else during practice, because he trusts Goodwin. They played together last season. Garoppolo and Garcon did not play together. So far, Garcon hasn’t caught a pass during training camp. Goodwin caught two on Friday.

“He is underestimated as a route runner,” Witherspoon said. “He runs very intricate routes, detailed routes. Combine that with speed that threatens you — you have to respect it.”

Sometimes, it seems the only person who stops Goodwin is Goodwin. He gets open, but can’t always hold onto the ball. Either he drops it or fumbles.

On Friday, he fumbled. He ran a shallow cross, caught the ball, took two steps and got stripped by Brock Coyle. The ball rolled to Jaquiski Tartt and the defense recovered it.