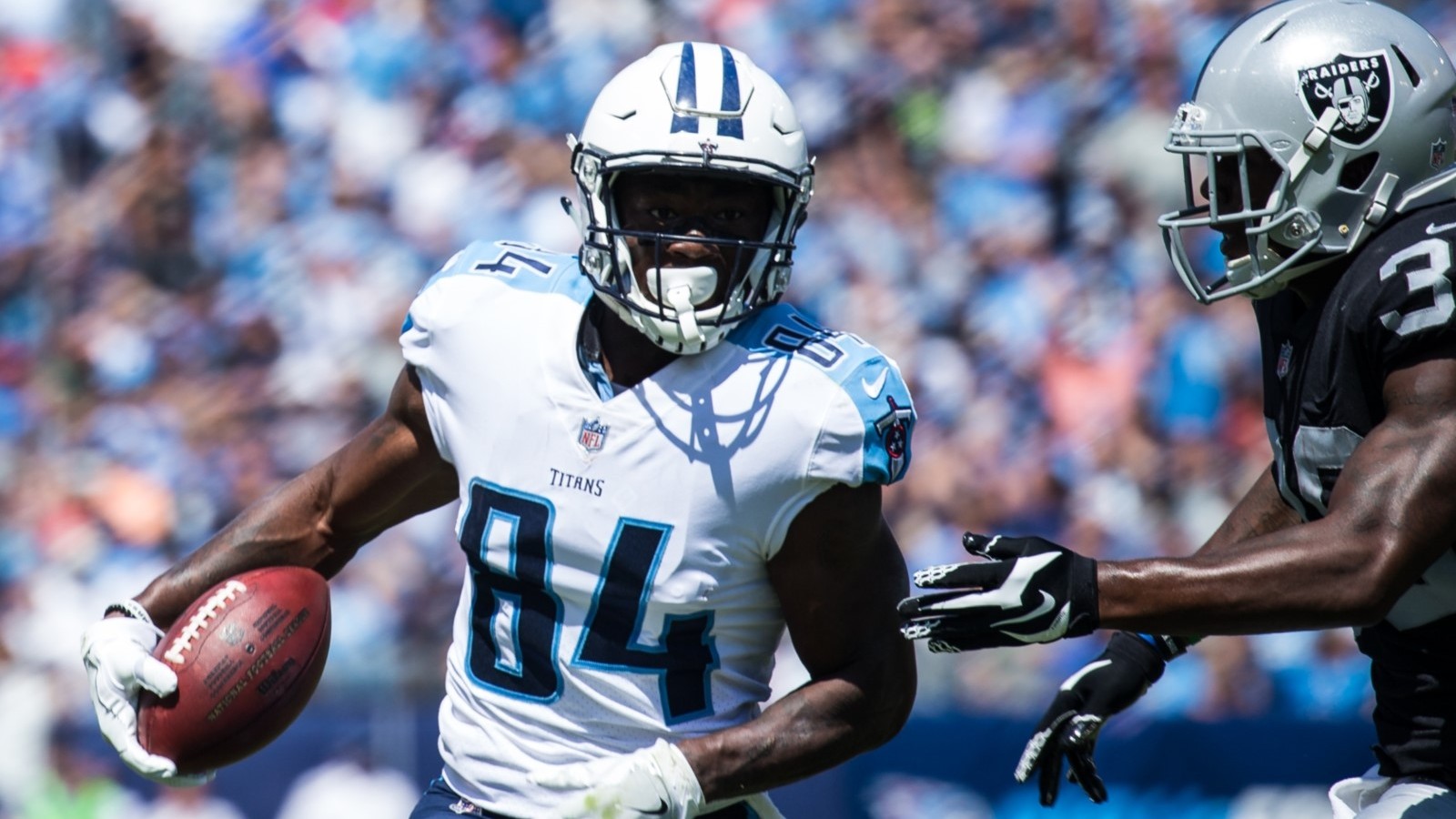 Here are some Fantasy tidbits from yesterday’s first practice for a lot of teams.

Play of the day: Malcolm Butler issued a challenge to receiver Corey Davis in one-on-ones, and the proceeded to wrestle Marcus Mariota’s on-target pass away from Davis.
Butler pledged that his Super Bowl benching would be extra motivation, and he certainly played motivated on that drill. After he took the ball away from Davis, Butler punted the ball to the other end of the field and told the second-year receiver, “This ain’t no (expletive) OTAs.”

Up and down day: Speaking of Davis, the fifth overall pick in last year’s draft, not only had the play that Butler made against him, but he also dropped two passes during team drills. However, he made up for that in a red zone drill by making the best catch of practice late in the session. With Adoree’ Jackson draped all over him in coverage, Davis caught Mariota’s fade route by leaping into the air and coming down with it while finishing with a slide out of the back corner of the right side of the end zone.

During the first play of the 49ers opening training camp practice, McKinnon flashed, turning upfield and breaking free on a big run that could have gone for a score. Later during the practice, he caught a short pass from Jimmy Garoppolo and took off down the right sideline. The long play sealed a productive session for San Francisco's RB1.

The offense, which seemed to focus more on the passing game Thursday, had a decent day. Tannehill was protected well enough to throw a couple of nice passes to wide receiver Danny Amendola. Rookie tight end Durham Smythe went to the ground to make a nice catch, and several running backs — including Drake, Frank Gore, and rookies Buddy Howell and Kalen Ballage — had big holes to run through, thanks to the offensive line.

Frank Gore is entering his 14th season in the NFL, but you’d never be able to tell considering how fast the former Hurricanes standout blasts through running lanes, picking up chunks of yardage. Gore’s jersey is one of the eight for sale in the Dolphins’ Davie Pro shop.

1. Quarterback Mitch Trubisky has been intercepted in all three of the Bears’ padded practices.

2. Anthony Miller showed off his strong hands on a touchdown grab and another highlight-reel catch, part of a standout practice for the second-round rookie slot receiver.

Here are some observation from day one of training camp: Eli under threw a deep ball that was intercepted by Jack Rabbit. The pass was intended for Cody Latimer. The quarterbacks were good at times and mediocre at times. Eli's deep ball arm strength is something that will be watched closely as the season progresses. Davis Webb got off to a slow start then played well. He throws a beautiful deep ball, but then will overthrow an intermediate target. Kyle Lauletta lack of arm strength can be a real problem in this league. The windows are so tight in The NFL that passes he completed in college will not be completed in this league. He threw behind receivers and came close to throwing a few picks. Jack Rabbit and Eli Apple played well but there is zero depth behind them. Teddy Williams and Webb are not quality corners.

PLAY OF THE DAY: Quarterback Tyrod Taylor lofted a pass about 40 yards down the left sideline, and Landry jumped over the defensive back to snatch the ball out of the air with both hands.

Carson Wentz’s first completion of 2018 came courtesy of rookie tight end Dallas Goedert, who was used in a number of different ways on Thursday. The second-round pick lined up in the slot, out wide, and on the line of scrimmage, showing his versatility. He ran a quick route to the right flat on this play, and Wentz hit him in stride.

I mentioned the versatility Goedert showed throughout the day. A few plays after Clement’s big catch, Goedert lined up by himself on the outside, matched up on defensive back D.J. Killings. Wentz went to the rookie on a slant route, and he almost came up with a big catch, but Killings was able to break on the throw and get the ball on the ground. Killings is competing for a spot in a tough Eagles secondary.

It was clear multiple tight end sets will still be a focal point in the offense. The Eagles practiced several two TE sets - with a variety of tight end combinations and formations.

Deon Cain spent his first NFL training camp practice on Thursday snagging everything thrown at him, picking up right where he left off last spring, when he flashed routinely in the Indianapolis Colts’ new-look, new-feel offense. “His talent would probably be a higher round than we got him,” scouting director Morocco Brown offered back in May after Cain went 185th overall in the draft. “That was what was attractive.” Midway through the two-hour practice, after a number of catches, Cain made the play of the afternoon, snatching a long bomb from Jacoby Brissett down the right sideline in tight coverage.

In just under an hour of work Thursday, Indianapolis Colts quarterback Andrew Luck completed 11-of-19 passes in 11-on-11 and 7-on-7 drills Thursday. It was the first time he took reps with the first team since 2016. “It was really good,” coach Frank Reich said. “Just him being under center and running the team periods, making plays, seeing him hit the big play to (Eric) Ebron, taking control of the huddle, making some checks at the line of scrimmage – you know, doing what he does. You could see it in his demeanor, working through progressions. He looked sharp.”

That last part was debatable. Luck, who was not available for comment because player interviews are held prior to practice during training camp, wasn’t sharp by Luck’s lofty standards. He was, more accurately, rusty from having not thrown a pass against the starting defense since undergoing surgery in January 2017.

WR Tyler Boyd and Andy Dalton picked up right where they left off, that 49-yard touchdown pass with 44 seconds left to knock the Ravens out of the postseason in the season finale in Baltimore. Boyd smoothly caught five of Dalton’s 10 completions in 11-on-11 (out of 12 attempts), all in the middle of a field he owned operating primarily out of the slot. The most impressive play may have been a Dalton dart thrown through a tight window of safeties Josh Shaw and Brandon Wilson and Boyd tracked it and caught it before yanking it out of traffic.

Boyd was probably the second best receiver of the spring behind A.J. Green, but some wonder if the traits that make him so effective in the slot translate to the outside.

This one drew the biggest cheer of the day from the estimated crowd of 950 and why not? It’s the kind of play they’ve expected from Ross since the Bengals took him with the ninth pick in the 2017 draft.  Not the 17 snaps and no catches in three games that they got.

Ross, who ran the scouting combine’s fastest time ever at 4.2 seconds, showed a little bit of that kick on a go ball in team drills as he worked on starting cornerback Dre Kirkpatrick. Ross looked to be trailing Kirkpatrick on his route down the sideline as Dalton launched it. Then with the ball in the air, Ross kicked into another gear, sped past Kirkpatrick with one final hand on his side in the chicken fight and tracked the ball as he disengaged from the defender.

The Derrick Henry-Dion Lewis splits were roughly 60-40 in favor of Henry. It appeared that Henry got most of the first team reps when the Titans were in heavy packages with 2 or more tight ends, while Lewis got more work in 11 personnel. I would also say that the Titans were probably in 11 personnel less than half the time today. That may be partially due to Matthews being out, but we saw a lot of Jonnu Smith and Luke Stocker today.

There were a lot of Marcus Mariota bootlegs and roll outs and the Titans QB looked noticeably faster as compared to his speed early in camp last season when he was coming back from the ankle injury.

The Titans also had some interesting 2 x 2 sets with Taywan Taylor and Corey Davis lined up to one side and Delanie Walker and Jonnu Smith lined up to the other side (Walker split out wide). I really liked the look of that.

Speaking of Jonnu Smith, he was featured a lot with the first team offense and I suspect he is going to have a larger role in the passing game this year than he did last year. He looks good.