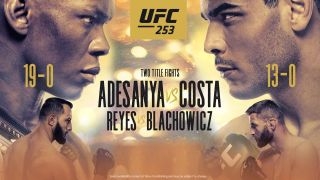 The main event of the evening and for the UFC Middleweight championship. This is going to be an exciting one to watch. Adesanya enters as a –180 favorite, and fights with an 80” reach (8” longer than Costa) that accompanies flurries of brutally accurate punches, kicks and knee strikes, from his switch stance. The Champ comes into this title defense at 19-0-0, two out of the last five KO finishers, the others went to unanimous decision. Costa enters at 13-0-0, standing 6’1” (3” shorter than Adesanya). He is powerful. Opponents have fallen after landing a strike on him and he barely moves from it. Four out of his last five matches were KO finishers in the 2nd round, except for one which came in the 1st round. He lands on average 8.43 significant strikes per minute, more than double of Adesanya, with a 57.82% accuracy (Adesanya – 48.74%). Both fighters need to remain mistake free in this one because each will capitalize as soon as the other does. Costa is pretty durable, and so it may take more significant strikes from Adesanya to potentially KO him, so great for those DFS points, but either should be a great play.

Reyes lost the title fight against Jon Jones at UFC 247 that went the distance in February. However, the title was vacated in August and so Reyes is back. In his losing effort to Jones, Reyes landed 116 significant strikes in that match. On average, he lands 4.88 significant strikes per minute with a 49.44% accuracy. Blachowicz has won his last two out of three via KO. At 6’2”, he is 2” shorter than Reyes, but has a 1” reach advantage. Although agreeing with the odds at –270 in favor of Reyes, for DFS purposes, either Adesanya or Costa should provide better value at lower costs.

Matthews is a –700 favorite to Sanchez’s +500 underdog. Don’t invest anything in Sanchez, unless you’re doing so for a riskier play and to get both Adesanya and Costa, or one of them and Reyes, into lineups. Matthews is 12 years younger than Sanchez, lands 2.98 significant strikes on average per minute (fairly even with Sanchez) but also averages 2.20 takedowns. Those stats are intriguing for DFS points, but this is more of a match to just put a few bucks on Matthews to win it outright.

Espino is a –300 favorite in this one. He lands 6.11 significant strikes per minute, with a 95.65% accuracy, and 8.33 takedowns. Seven of his ten victories have come via submission, and all within the 1st round.  All that being said, this is his first fight in almost two years, but don’t let that scare you off of using him in lineups. Hughes has lost his last two matches and had a third recent end in a No Contest in the 1st round. The amount of takedowns possible for Espino, if he can’t get Hughes to submit in the first, could rack up good points in DFS. Maybe even a high risk/high reward MVP rostering of Espino could separate you from the pack in GPPs.

Riddell has won his last five fights, his most recent three by split and unanimous decisions. He has a 2” reach disadvantage against da Silva, but lands 4.30 significant strikes per minute (3.22 more than da Silva), with a 14.23% better accuracy. Da Silva has not fought since August 2019, in a winning effort via unanimous decision. He only landed 17 significant strikes in that one though. For GPP, Riddell is a high risk/high reward play, as there’s a decent chance he is not heavily rostered in lineups.

Kara-France has won nine out of his last ten fights dating back to March 2017. All but three of them went the distance for judges’ decisions. Against Royval, he comes in 5” shorter at 5’4”, but has a 1” reach advantage. He lands on average 5.27 significant strikes per minute, so if this one goes the distance like the recent pattern has shown for him, look for 80-100 strikes to land for him. Royval is a +190 underdog who lands a lot less significant strikes, but does have better accuracy landing them. The taller fighter also has a better takedown average and accuracy than his opponent. He has won his last three matches via submission, so if he catches Kara-France in a grapple, this could go Royval’s way and fast.

Ibragimov comes into this one as the favorite at –175, even though he lost his last three by 1st round KO, unanimous decision, and 3rd round submission respectively. Marques is almost ten years older than his opponent and has not fought in over two years. He has a 3” height advantage over Ibragimov and has not been KOed since 2016, but that’s about it for any advantage indication. There’s nothing really standing out for Ibragimov to be a “must roster” in lineups in this one, although most things indicate he should walk away with the W. Better value could be found at a similar price point.

“Alexa, should I roster Aleksa?” Camur enters this fight as a –160 favorite with a 6-0-0 record. His most recent victory was in January via unanimous decision, but all other victories came by either 1st or 2nd round KOs. Knight is making his UFC debut as a slight underdog at +140 with an 8-1-0 record. Knight is the shorter fighter by 3” with a 1” reach disadvantage as well, but his significant strike count (6.61 per minute) and accuracy (78.87%), as well as takedown efficiency and accuracy (3.54/57.14%), averages much better than Camur. As a budget saver, Knight is intriguing the slightly lower cost, but either fighter would be a decent play to roster in lineups.

Interesting, Young is the slightly more expensive choice on FanDuel, yet the odds have him as a +105 underdog to Klein’s -125. Young‘s last fight was in February 2019 where he won via unanimous decision, and before that was in June of 2018 where he won via KO with 20 seconds left in the 2nd round. Klein has won his last 7 fights, 6 of which came via KO, and his last three being in February, September 2019, and June 2019. This is Klein’s UFC debut, but his more recent time in the ring, with KO victories to boot, make him the more intriguing play at the slightly lesser cost.

Tukhugov enters as the more experienced fighter with a 19-4-1 record and has a higher takedown average (2.88) and takedown accuracy (56.52%) over Dawodu. He also won his las fight in February over Kevin Aguilar via 1st round KO after a few left cross punches landed on target. He’s an Orthodox fighter, so those left crosses can come quick. Dawodu, however, comes in with an 11-1-1 record and averages landing 5.28 significant strikes per minute with a 46.61% accuracy. His biggest advantage is his 5.5” reach advantage over Tukhugov. He has won his last four matches, three via judges’ decisions. If this goes the distance, Dawodu should have a good amount of significant strikes landed.

Eubanks was the underdog in her last fight two weeks ago and won via unanimous decision against Julia Avila. Eubanks’ last five fights have gone the distance and she has won three of them unanimously. Vieira last fought at UFC 245 in December, and was KOed in the 1st round. Before that, she fought in March 2018 winning via split decision. Eubanks showed great skill two weeks ago, escaping submission attempts and going toe-to-toe with punches all the way to the end. At the price point, she could be another good play here to hit value and save on the roster budget.