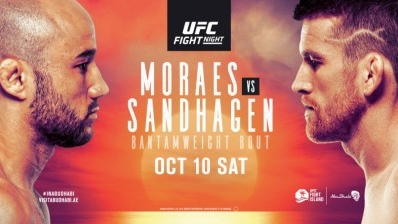 Sandhagen, although being the –140 favorite and the more expensive of the two in DFS, is coming off of a first round submission loss via rear naked choke this past June at UFC 250. That being said, Moraes has not fought since December at UFC 245 which went the distance in a split decision in his favor. Between December 2017 and February 2019, Moraes fought three times which all ended in first round victories – two by KO, one by submission. Sandhagen averages landing 6.95 strikes per minute, to Moraes’ 3.53, and has a 9.66% better accuracy. He should be a safe play at his price, but I may look elsewhere.

Amirkhani is coming off a first round submission win on July 11 at UFC 251 via anaconda choke. His previous win before that in June 2019 was also via submission, but he suffered a third round KO loss in between in November. The +220 underdog lands almost 3 less significant strikes per minute than Barboza, but is 2.77% more accurate. He also makes up for that with his takedowns, as he averages 3 more than Barboza. Barboza is older, has 9 more fights under his belt, has a 3” reach advantage, but has also lost his last three fights by split decisions and one KO. If he can avoid takedowns and submission attempts from Amirkhani, this could go in Barboza’s favor with the amount of strikes landed alone. Amirkhani does make for an intriguing GPP budget saver though at his price, and the takedown potential he offers.

This is Rothwell’s 51st professional fight. The 38 yr old (39 next week) is coming off two victories, most recently in May via split decision. His KO win in December came at the end of the second round, but not before he was docked a point after two low kicks to his opponent. Tybura is also coming off two consecutive victories via unanimous decision in 2020, however, lost both of his fights in 2019 via first and second round KOs. He has not finished a fight on the winning side since March 2017. I would stay clear of this one in DFS. At both price points, I’d rather see what else I can do with the budget.

Du Plessis is making his UFC debut, having last fought in December and September 2019 with wins via first round submission by guillotine choke and a second round TKO respectively. Perez last fought in November, ending in a loss via unanimous decision. He has had a win/loss pattern since December 2017, so if it continues, this should be a victory for Perez. He did win 10 consecutively before that pattern began. He lands 2.75 strikes per minute on average, so the points might not be there unless one leads to an early KO. Du Plessis looks like the arguably safer fighter, and the odds are in his favor at –170. Side note: Perez wore Joker face paint at the weigh-in. 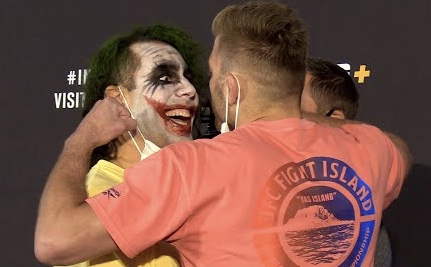 Aspinall was very impressive in his UFC debut in July, knocking out his opponent in 45 seconds with only 10 significant strikes landed. Baudot is making his UFC debut in this one, his last win was via disqualification in the third round in April 2019, and last finished a victorious match in May 2018. Aspinall has won his last four fights with first round KOs that did not go longer than 1:21 into the round. He is definitely the safer play in this one, and worth budgeting around when constructing your lineups.

Another UFC debut being made as Topuria comes in with an 8-0-0 record having finished seven of those eight in the first round (the other in the second round), and all except his most recent via submission (his most recent in November was via first round KO.  Zalal has won his last four, his most recent three being via unanimous decision. This will also be his fourth fight in 2020. Zalal on average lands 3.20 strikes per minute, with a 55.60% accuracy, but also averages 3 takedowns and 1.67 submission attempts. Those are nice averages for racking up DFS points. If you need a budget saver though, Topuria looks like an intriguing choice, but expect some risk. Zalal is 10-2-0.

Another UFC debut for Bhullar, who is 8-0-0 with three in March via unanimous decision in September, and first round TKO and submission respectively before that. Six of his eight wins have come in the first round. Breese had his last win in May 2018 via first round KO, but then lost his next match in February 2020, also via first round KO. The two size up similarly but Bhullar has a 4.5” reach advantage. Breese is a –250 favorite though to Bhullar’s +210 underdog odds, but call it a strange feeling that Bhullar has a good match, and gives good DFS value at his budget-saving price point.

Daukaus won his last fight 7 weeks ago in the first round, landing 37 significant strikes, which ended with a flurry of 1-2 punches to get the KO in his UFC debut. His match before that in August 2019 was also a first round KO victory. Nascimento is undefeated at 8-0-0, having made his UFC debut on May 16. Six of his eight victories came via submission, the other two via KO, and six wins also being in the first round. He is the favorite at –270, and has a 4” reach advantage over Daukaus (+230). The takedown potential from Nascimento, coupled with what significant strikes can also be expected, he’s a safer play. Daukus is a high-risk/high-reward budget saver if you’re paying up elsewhere.

Kasanganay is undefeated at 8-0-0, making his UFC debut in August. His two fights before that were part of Dana White’s Contender Series, and the last four victories have all gone the distance. Averaging 5.58 significant strikes per minute, if the pattern continues and this goes the distance, that’s great DFS value. Buckley is coming off of a third round KO loss from a brutal straight right to his jaw, that knocked out his mouth piece, in his UFC debut on August 8. He landed 40 significant strikes before going down, 31 of them landing to the body. He’ll want to make a great comeback after his debut loss, but at a +200 underdog to Kasanganay’s -240, have to go Kasanganay in this one.

Kelley is coming off a loss via unanimous decision at UFC 252 in August. He was able to land 114 significant strikes in that match, but falling victim to the same amount of strikes on top of five takedowns as well. AlQaisi is also coming off a loss at his UFC debut. He was able to land 44 strikes in that one coupled with two takedowns. Kelley has a 3” height and 2” reach advantage, and lands 4.67 more strikes on average. Kelley’s the obvious choice, but chances are this goes the distance, so finisher points might not be had.

Morales will look to continue his undefeated streak with an eleventh win in this one. His last two wins came via unanimous decision, and averages 3.85 significant strikes per minute. Chikadze has won his last five, his last three in UFC all by decision (two split, one unanimous). He also lands 3.31 strikes per minute on average. Expect this to go the distance, and base your choice on which medium-risk fighter to use based on what your budget allows for. Morales is favored at –155.

Egger makes her UFC debut on a three win streak against Cortez, fighting for the first time in 11 months, but looking for her eighth consecutive win. Her last finish came in September 2018 via KO, and she averages 4.83 strikes per minute. Look for this to go the distance, and for better finishing value at a similar price point.

Silva is coming off two losses in UFC via unanimous decision and no contest. He is a +375 underdog landing 2.32 strikes per minute, but also 2.68 takedowns. Ulanbekov is 10-1-0 making his UFC debut with a 3” height and 5” reach advantage over Silva. He has won his last two via submission, so this could turn into a takedown grapple match and stay that way for the most part. Neither fighter at their price point is overly intriguing. 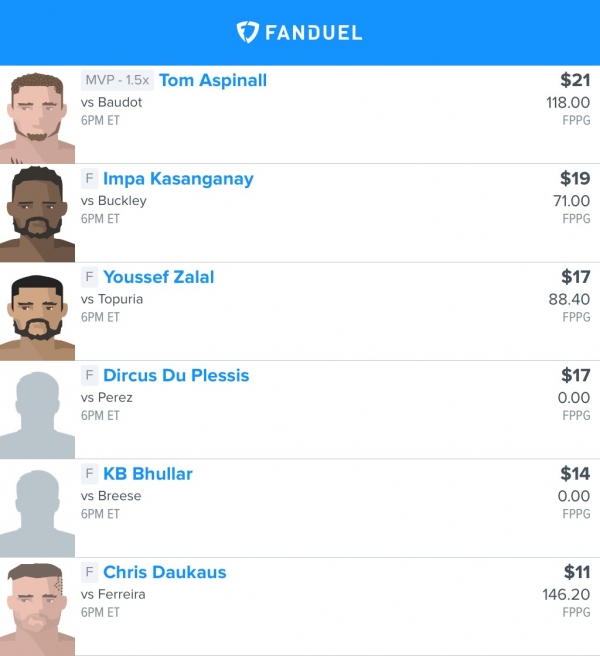