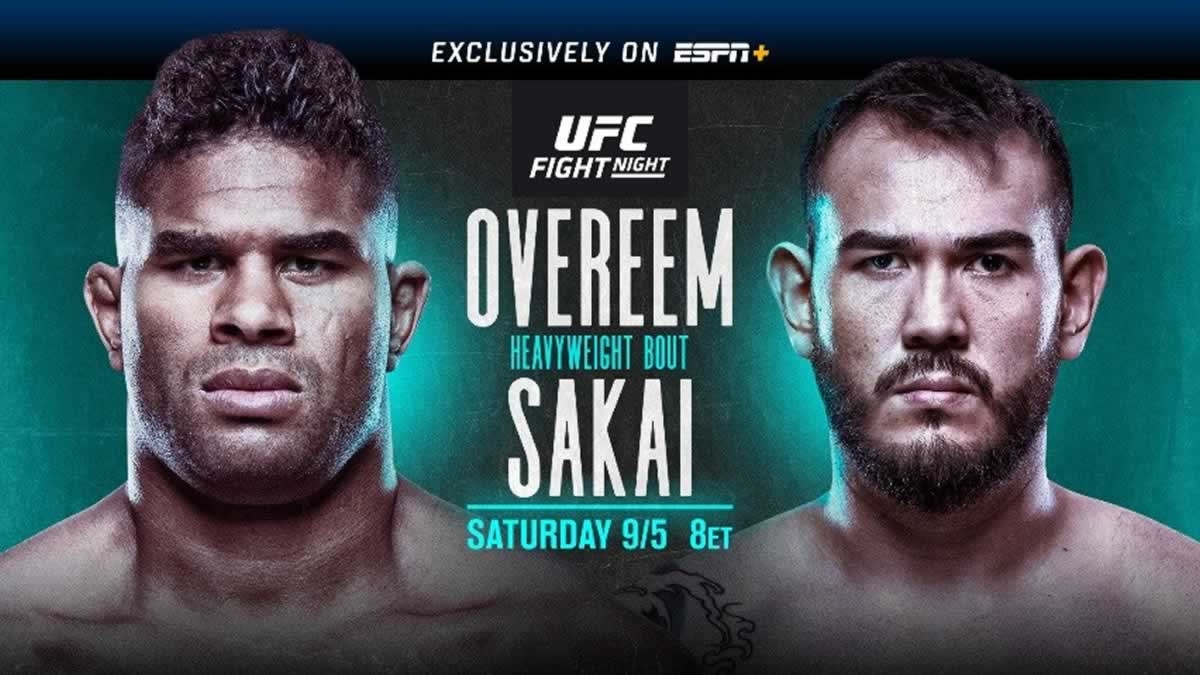 The Heavyweight Main Event of the evening features two strikers coming off victories back in May. Expect a fist fight here. Overeem lands 3.66 significant strikes per minute, with a 63% accuracy, having won three out of his last four by KO – two in the final minute of Round 1, the other, and most recent, at the 3 minute mark of the 2nd. If Sakai can survive Round 1, the rest of the match could play in his favor. He has had better success in later rounds than Overeem, having two KOs in late second and third rounds, at two split decisions. Overeem is the more experienced fighter, ten years older than Sakai, is 1in taller, and has a 3in reach advantage. If you can fit him into lineups, great. He’s not a must-have, and more value could be found in significant strikes landed from Sakai (he averages 5.45 landing per minute), especially if this goes the distance.

Both fighters here coming off losses, but while Azure last fought in May, this is Smith’s first fight in almost a year. Azure is the favorite at –220, he lands over 3 more significant strikes with a 15% better accuracy. Three of his last four wins have from via unanimous decision, and Smith’s last two fights have also gone the distance (1-1). The potential volume for strikes could be decent if this one also goes the distance for the fighters.

Moises is a –160 favorite to Turner’s +140 underdog. He is coming off a submission win in May only 25 seconds into Round 2. Turner is also coming off a win in February via KO halfway through the second round. In February 2019, Turner had a win by KO only 53 seconds into Round 1. He is 6in taller with a 7in reach advantage over Moises. Turner also lands 3.27 more significant strikes per minute on average and has a 4.89% better accuracy. Turner could be a nice budget saver in GPPs.

Fabinski won his last match in March, after not fighting in all of 2019, via unanimous decision. He lost via submission one minute into Round 1 in November 2018, and the three wins before that were also by unanimous decision. So he’s no stranger to going the distance in his fights. Muniz, however, has won his last five with two submissions and a KO within two minutes of the first round. The key here is for Muniz to avoid the takedowns from Fabinski, as he averages 7.17 with a 71% accuracy. His accuracy landing significant strikes is also 10% greater than Muniz. Play it safe with Fabinski, but an inexpensive greater risk could mean greater reward with Muniz.

This is Kelleher’s fourth fight in 2020. So far 2-1, his last victory came in May via KO over the aforementioned Azure three minutes into Round 2. He then had a loss via unanimous decision in June. Natividad is a +180 underdog, but is coming off five straight wins. Those five also averaged finishing to the end of Round 2/ beginning of Round 3. He’ll be looking to make a big splash in his UFC debut. Kelleher is the much safer play, but with potentially moderate value for the price. Nativadad looks to be another high risk/high reward choice to help save on the budget.

This match is back on the card after Saint Preux tested positive for Covid-19 two weeks ago. Interesting though that Menifield‘s price increased by 1 on FanDuel from two weeks ago, while Saint Preux’s stayed the same at 16. The line that he is favored on also moved to -130 from -125. He is the better striker, landing 47% of his significant strikes and landing almost four per minute.  Saint Preux is the bigger fighter, with a 3in height and 4in reach advantage. He lands about 2.5 significant strikes per minute with a 46% accuracy. Menifield received his first loss via unanimous decision this past June, but before that had three first round KOs between June 2018 and June 2019, one as fast as 8 seconds into the match. If you choose to play either of these fighters, just be ready to potentially have to make a last-minute pivot should another Covid-19 test show positive.

Araujo is coming off a loss to Jessica Eye in December of 2019 via unanimous decision, but won her previous five before that. She has had three submission armbar wins, but more recently three wins via TKO due to opponent injury and doctor stoppage. De La Rosa has 8 submission victories since 2015 – either by armbar or rear naked choke. The stats show in favor of Araujo though. Although the shorter fighter by 3in, the two match on reach, and Araujo lands 2.21 significant strikes on average with a 14.72% better striking accuracy. This could end up being more of a grabbling match between the two though, each looking for that specialized submission finish. Grappling doesn’t get you points on FanDuel though, so this might be one to avoid altogether.

Romanov is making his UFC debut after a positive Covid-19 test in his team postponed his intended debut at UFC 251. Coming in undefeated, Romanov has finished all 11 of his victories within the distance – 7 in the first round – and with a healthy mix of submissions and KOs. Rogerio de Lima is on a 7 match win/loss pattern going back to 2014. He won his last in February, so if the pattern continues he’ll have a loss against Romanov. It may be a bit chalky in a GPP to roster Romanov, but for the budget cost, the value could prove beneficial.

Pereira lost his two previous matches, his most recent was by disqualification after hitting his opponent with an illegal knee while grounded. Imadaev has also lost his last two bouts and is the underdog in this matchup, but still at -105. Imadaev has a 3in longer reach and lands slightly more significant strikes per minute at 0.65, but Pereira has a 9.78% greater accuracy percentage for significant strikes. Look for more potential takedowns from Pereira as well.