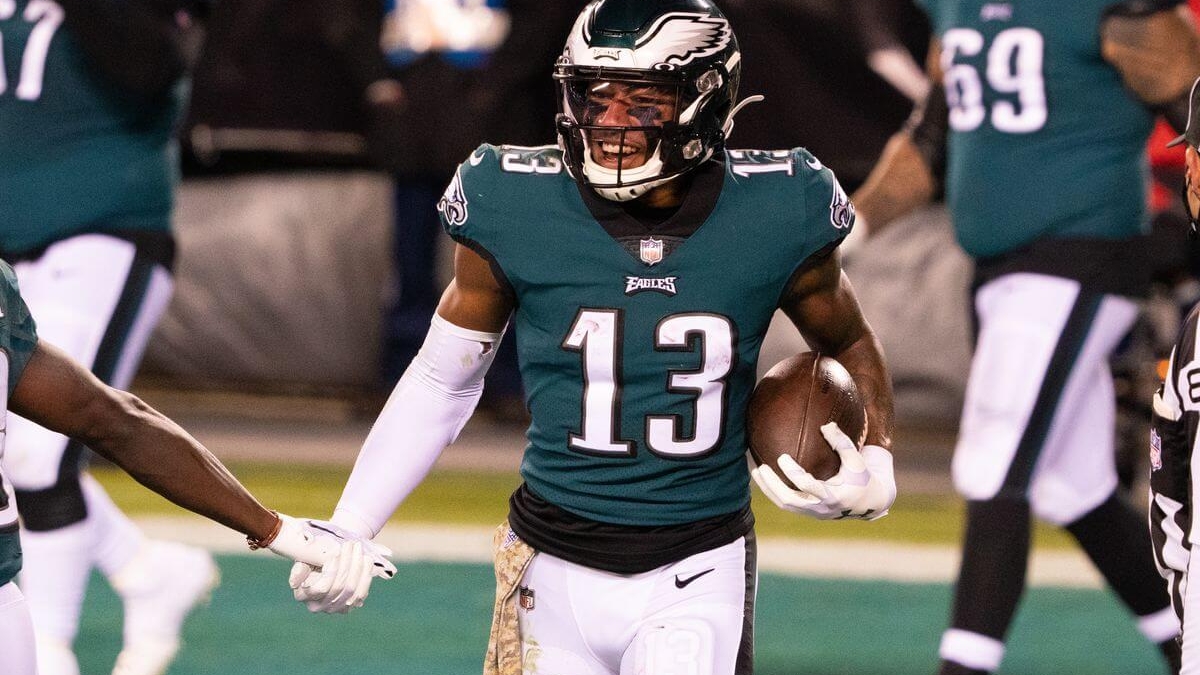 What a find for the Philadelphia Eagles with Travis Fulgham after having almost their entire receiving core banged up in the first few games. Then some guy named Travis Fulgham entered the scene in Week 4 with a game-winning touchdown catch against the 49ers. After that, he earned a massive target share over the past four weeks. Up to this point, Fulgham looks like a beautiful waiver wire pickup as an unexpected fantasy contributor at the wide receiver position. In this article, we analyze targets, target share, air yards, air yards share, and more to highlight an unexpected fantasy contributor in Travis Fulgham.

First, let’s briefly review the story of Travis Fulgham. His parents worked overseas, and Fulgham traveled the world during his youth. Then his family returned to the United States, and he played football for the first time as a 16-year old in high school, which led to a walk-on opportunity at Old Dominion University. The Detroit Lions drafted Fulgham in the 6th round of the 2019 NFL Draft and then bounced to the Packers practice squad. In late August, the Eagles signed Fulgham only to waive him a couple of weeks later.

Although not entirely fantasy relevant, I appreciate the grind and journey of unexpected fantasy contributors such as Travis Fulgham. With that said, we dive into his College Prospect Profile, and then we look at his five games in 2020.

When entering the NFL Draft, Travis Fulgham had a 36% College Dominator (70th percentile), 17.2 yards per reception (80th percentile), 22.7% college target share (52nd percentile), and 21.0 Breakout Age (38th percentile). The College Dominator percentage and yards per reception in his final college season stand out as above average metrics. However, the lower college target share and breakout age don’t look appealing. Fulgham displayed explosiveness with a 125.1 Burst Score (71st percentile) and a high 10.19 catch radius (83rd percentile). In the short sample with the Eagles, we observed the explosiveness and catch radius.

Keep in mind that all of Travis Fulgham’s productivity, opportunity, and efficiency metrics totaled through only five games in 2020. First, we look at air yards with Fulgham since Carson Wentz is throwing the ball a ton and down the field and currently ranks 1st with 2,747 air yards and 3rd with 42.4 team pass plays per game. The Eagles also rank 4th with 2.40 plays per minute, meaning they have the 4th highest pace of play. 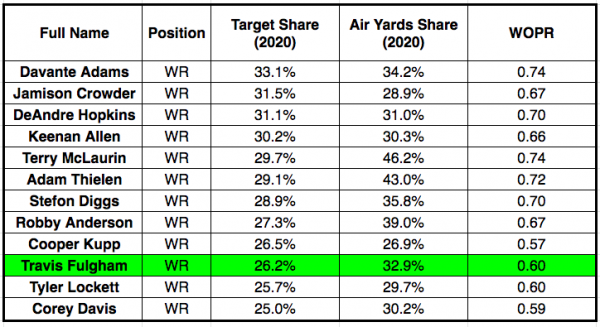 In terms of efficiency, Fulgham logged 9.9 yards per target (No. 18), +21.7 Production Premium (No. 14), and a 40.8% Dominator Rating (No. 4). The Dominator Rating indicates that Fulgham accounts for over 40% of the team’s receiving yards and receiving touchdowns. Although he displayed a high efficiency, Fulgham earned such a high target share that backed up his unreal stretch as an unexpected fantasy contributor.

What to Expect Moving Forward?

Last week, rookie Jalen Reagor returned from his thumb injury. Reagor logged an 83.3% snap share with 24 routes, six targets, three receptions, 16 receiving yards, and one touchdown. Travis Fulgham looks like their number one receiver at the moment, and Reagor likely receives more targets moving forward. However, Carson Wentz ranks 3rd in team pass plays per game, and thus both Reagor and Fulgham could produce with a healthy target share. Wentz also holds a 128.5 quarterback rating (No. 11) when targeting Travis Fulgham, so expect him to continue to earn targets and produce for the rest of the season.