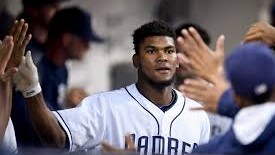 It is waiver wire time again fantasy folks! Whether it is due to injury, your player not performing, or a hot name on the wire, it is always fun to try to improve your team. I do not like to keep putting the same guys each week, so don’t forget about Joey Lucchesi, Reynaldo Lopez, and Brian Anderson from last week. If you have any questions you can find us on Twitter (@fightingchance (Ryan), @fantasygeek37 (Steve), and @polkapat for Patrick) or you can email me at ryan@fightingchancefantasy.com. For those of you who like to own the new hot prospects coming to the Majors, you might want to move on Nick Senzel now.

Nick Senzel, 3B, Cincinnati Reds. The arbitration clock is now up on Senzel, and the Reds can bring him to the Majors now with no penalty to the number of years they control Senzel. Word is also that they moved him back to third base down on the farm. He hasn’t been hitting down at AAA, but that shouldn’t matter as he is the team’s top prospect, and their starting third baseman is hurt. I would be looking to add Senzel in speculation that his call up should be coming sometime in the next week.

Franchy Cordero, OF, San Diego Padres. When Manuel Margot landed on the DL after getting drilled with a pitch, it opened up the door for Cordero. He suffered a groin injury, but this was perfect timing as he was ready to return. He hit a home run in his first game, and tagged another one Friday night. The funny thing is he is yet to be on base because his only two hits are home runs. He is a great speed threat with some power mixed in, and could be a nice addition to your squad.

Dansby Swanson, SS, Atlanta Braves. It was a disastrous rookie season for Swanson, and fantasy owners gave up on him completely. However, he was still a former number one overall pick so the talent is there. Swanson is off to a great start with a .348 average, a homer, eight RBI, and a steal. Swanson has a chance to be a .290 hitter with 15 homers and 15 steals, and should be a great addition if you need help at middle infield.

Michael Brantley, OF, Cleveland Indians. Once a 25/25 threat, Brantley has had more injury problems than the entire group of Jackass guys. An ankle injury this time got him off to a slow and delayed start, but he has picked it up the last few days. If he is healthy he could be a solid average guy and the chance to go 20/20. You always have to worry about him going down again, but Brantley is WAY too good to be only owned in about a third of fantasy leagues and is definitely worth an add.

Jurickson Profar, 2B, Texas Rangers. A former top prospect like, forever ago, Profar is getting yet another chance to show that he can be productive with the injuries to Rougned Odor and Elvis Andrus. However, this is about his 834th chance to make an impact and be an everyday player, and whether it is injuries or just plain sucking, he hasn’t taken advantage of any chance yet. He has never hit more than .239, never hit more than six homers, and never stolen more than two bases. And a couple of seasons he had nearly 300 at-bats. Personally, I think he’s failed at enough opportunities to tell me he isn’t going to succeed this time, but he had talent at some point so I suppose it is possible. The Cardinals need to bring up Jack Flaherty really soon, and when he does he should have a solid impact on fantasy baseball

Jack Flaherty, SP, St. Louis Cardinals. He has nothing left to prove at the Minor League level as he put up really strong numbers there. Flaherty didn’t shine last year in his cup of coffee with the Cardinals, but in his one start with the big club this year he was amazing with nine strikeouts in five innings where he allowed one run. Adam Wainwright and Michael Wacha are neither the picture of health or effectiveness early on in the season and if either of them goes down with injury or continues to not pitch well, Flaherty could find himself with a regular turn in the rotation soon. I am grabbing Flaherty in my leagues now.

Sean Newcomb, SP, Atlanta Braves. A former first round pick of the Angels, Newcomb struggled last year in his first Major League action with the Braves. However, he had a very strong Minor League career, and he is a good strikeout pitcher. Even while struggling last season he still struck out 108 guys in 100 innings. However, his problem is walking too many batters. His first outing was a little shaky, but he struck out nine in just six innings without walking anyone his last time out against the powerful Rockies. I like Newcomb a lot on an improving Braves team and someone who definitely belongs on fantasy rosters this season.

Nick Pivetta, SP, Philadelphia Phillies. Pivetta wasn’t very good in the Majors last season, but if you look at the majority of his Minor League career, you will see that the Phils have a pretty solid pitcher on their hands. Lots of young players, especially pitchers, struggle when first called up. He has three solid pitches, with his slider the best when he wants to miss bats. He is never going to strikeout 250 guys in a season, but I expect him to be fairly consistent. In his last two starts he has allowed a total of two earned runs and struck out 16 guys in 12.2 innings.  Pivetta could slide in and be a solid number four in your fantasy baseball pitching rotation.

Zack Wheeler, SP, New York Mets. After a couple of injury plagued seasons, Wheeler was beaten out by Stephen Matz for the last spot in the Mets rotation coming out of Spring. He got his opportunity the other day to get a start, and boy did he make the most of it. He allowed just one run over seven innings and struck out seven. Hey, sure it was against the Marlins, but it is an impressive outing nonetheless. Now, here comes the tricky part. First, he will get another chance to start this week, but this time against the Nationals. If he pitches well again the Mets are going to have a tough decision to make. Jason Vargas is returning from injury and you’d think he would be the fifth starter. Would that bump Wheeler back to AAA even if he pitches well again? You have to consider these factors if you are adding Wheeler. Good news for those of you who like Wheeler is that Stephen Matz is made of glass and should be hurt any day and that would give Wheeler a spot too.