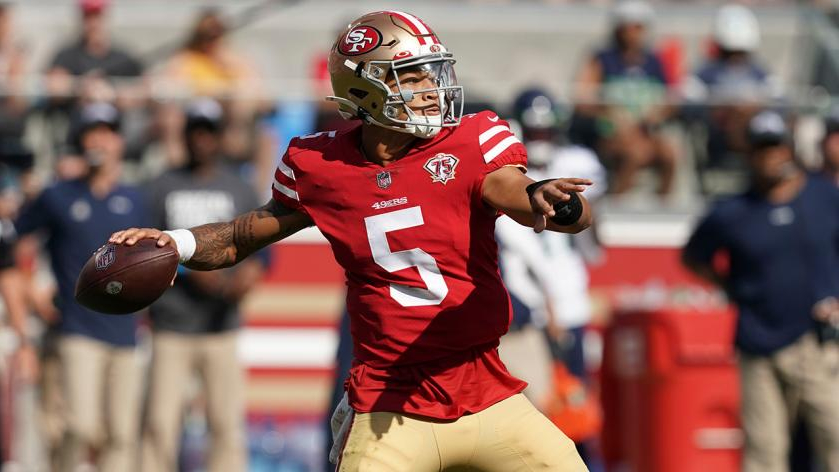 Time to continue grinding and working that waiver wire. We didn't see a lot of high-impact injuries for fantasy football this week, which is great, but we still have plenty of interesting guys to go after to help boost your fantasy teams. Let's get to it.

Trey Lance was thrust into the fire after Jimmy Garoppolo went down with an injury this past Sunday. It sounds like Garoppolo will miss some time, and Lance will have a great opportunity to show why the 49ers drafted him third overall. Lance is a huge threat on the ground and will put up plenty of fantasy points as a result.

The Carolina Panthers finally lost their first game, but Sam Darnold had his best fantasy week of the season so far. He’s looked much better on the Panthers than in all his years on the Jets and looks primed for a big season. Darnold is currently a top-5 fantasy quarterback with the development of his rushing game and deserves to be rostered, and started, in a lot more leagues.

David Montgomery seems likely to miss some time due to injury. Damien Williams has operated as the backup all season and now finds himself stepping into a starting role on a run-first team. Matt Nagy is sticking to his word as he says that Andy Dalton is still their starter when healthy, but this team looks better with Justin Fields at the helm. Williams will get plenty of work no matter who is at quarterback. He’s worth adding for running back needy teams.

Kenneth Gainwell has had a steady role out of the Philadelphia Eagles’ backfield that started in Week One. He has proven to be an effective receiving back and is inching closer towards an even split between him and Miles Sanders. Sanders is playing sixty or more percent of snaps while Gainwell has been in the thirties, but Gainwell is used frequently when on the field. He now has 13 receptions on 18 targets for 114 receiving yards compared to Sanders’ 11 receptions on 14 targets for 105 yards. This isn’t a huge difference, but it speaks volumes that Gainwell has more targets and receiving yards through four games as a rookie.

The Baltimore Ravens sat Ty’Son Williams as a healthy scratch after giving him the starting role for the first few weeks of the year. This kicked the door wide open for Latavius Murray who was given 18 carries against the Denver Broncos this Sunday. Murray won’t be a factor in the receiving game, but any running back getting double-digit rushes for the Baltimore Ravens is worth rostering.

We're all tied up at 7-7 in the second quarter‼️

Tune in on CBS. pic.twitter.com/1Rwh8jrP57

The Detroit Lions are exactly what Justin Fields and the Chicago Bears needed to get back on track. With Andy Dalton hurt, Fields got the starting nod and had an impressive game. With Fields showing nice touch on his deep balls, Darnell Mooney was able to put together a nice day as he finished with 5 receptions for 125 yards. The Fields to Mooney connection seems to have a lot of traction. Mooney should be a priority add this week and can be started in flex spots any game Fields is starting.

Jamison Crowder finally returned from injury and immediately helped the New York Jets get their first win of the season (Zach Wilson’s first as a pro). Crowder proved to be a safety blanket for Zach Wilson as he gathered seven receptions on nine targets for 61 yards and a touchdown. Things should be a bit easier on the rookie quarterback as he now has a trusted receiver, and Crowder should score plenty of fantasy points due to this role in the offense.

Off script play? No problem, Zach Wilson to Jamison Crowder.

Dawson Knox has been a touchdown machine this year. He now has four touchdowns on the year and is a top-5 fantasy tight end after four weeks of football. This touchdown luck will end, and likely soon, but he’s now getting enough looks that he can stay fantasy-relevant off of receptions and yards. Knox is now up to 15 catches on the year after having just 24 last season.

The One Who Knox. @dawson_knox #BillsMafia

Dak Prescott has had a really nice comeback season so far. Dalton Schultz seems to be benefitting heavily from this as he too finds himself as a top-5 fantasy tight end through four weeks of football. He now has six or more targets in three out of four weeks and is catching mostly everything thrown his way. Schultz should be rostered and started in most leagues. He has proven to be a trusted target for Prescott and is making the most of his targets.

The 2nd-highest graded tight end in the NFL, according to PFF?