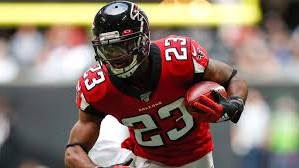 Foles is back.  But who knows for how long. Will he be better than Minshew? Will be he worse? Or will he be the same, which is a high floor, low ceiling quarterback. Against the Colts this week it may be tough to accrue fantasy points, but he still should be rostered in deeper leagues and 2QB leagues.

Hopefully you don’t need to start Finley, but I did last week, and while he didn’t win me the week, he didn’t lose it either. Against the Raiders this week I think Finley can be started in 2 QB leagues, but that is probably his ceiling.

I’m of the mindset that if Stafford can play he will play, but should he play? A back fracture is painful, and needs time to heal as we saw with Stafford last season. While he is out good ole’ Jeff Driskel gets the start and is a streamer in 2 QB leagues. Hard to pass on his weapons with Golladay and Jones Jr. playing at a high level right now.

With Devonta Freeman out for a week or two and Ito Smith sent to IR, Hill will probably be the top waiver add in most leagues. I am hoping to get him in one of my main leagues, but doubt he will slide. In a week with several important byes (GB, SEA, NYG) the streaming running back landscape is quite barren. Hill looked okay to good in his action the last two weeks and I hope that will continue.

Ty Johnson had a concussion this past week and who knows if he will play? If he sits then Mckissic has a touch floor of probably double digits, and is already the pass catching back. I am starting him in a league where I am without Aaron Jones and Devonta Freeman. Fingers crossed he can get double digit points.

Raheem Mostert, SF – Confidence 5-7 dependent on Matt Breida being out.

He looked good in his limited action, once again. Whomever is running for the 49ers puts up points. Mostert has continually shown his worth and should be rostered in all but the most shallow of leagues.

I doubt that he is still available in your league, but if so then I love his potential for the rest of the season. The Dolphins suck and will have to keep throwing in every game. The Dolphins quietly have an awesome schedule down the stretch versus: Bills, Browns, Eagles, Jets, Giants, Bengals.

Crowder is the WR1 on the Jets. He is a high floor PPR play, and a solid non-ppr play. As Sam Darnold is continuing to plateau he is focused on his quick shots to Crowder, and looks to him in the Red Zone. I have Crowder as my second claim in my main league behind Hill (because Parker is already owned).

While he didn’t do much last week, he still had the highest number of targets on the Titans. He is a beast once he gets the ball in hands as he is much faster than you’d think.

Despite a rough last week, I still think Gesicki has upside given the lack of weapons for Fitzpatrick to throw to.

Hollister is looking like a poor man’s Will Dissly. Even though he is on a bye, I think he is worth an add if you are streaming TE or in a TE premium league. I am very glad I grabbed in last week in my two TE premium leagues (even though I didn’t start him).