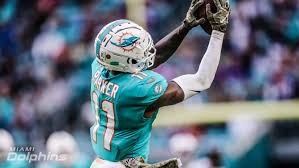 If you’ve been following my waiver columns, you’ll know I love the Dolphins rest of season schedule. So much so that I have made a point of picking up FitzMagic where I needed to, and even trading for him in some deep superflex leagues. If he is available, and you are struggling at QB, I would highly recommend picking him up regardless of what your conscience is telling you. He faces: Browns (no Garrett), Eagles, Jets, Giants, Bengals, Pats (week 17). You know you are intrigued.

Foles didn’t look amazing last week, but the Colts are a good pass defense. The most encouraging part of last week was the DJ Chark is still the Jags number one, and Foles has a solid connection with him. This week won’t be much easier against the Titans, but he is still a deep QB2 option.

Driskel gets the Redskins and he has shown competence. He was competitive against the Cowboys, and the Redskins are NOT the Cowboys. For fantasy purposes he is runner and a passer with Kenny Golladay and Marvin Jones. You can definitely do much, much worse. I’d rather start Driskel over Foles… There I said it!

RB – It is hard for me to rank these running backs. They are ppr vs non-ppr; floor vs ceiling; one week versus rest of season.

I see Scarbrough as a floor play in non-ppr leagues. He should get 12+ carries, no targets, but the goal line work. Given that I like him for a minimum of 5 points with one to two touchdowns in the realm of possibility. Should he play well again, I expect he will become the primary back pushing Ty Johnson to fewer touches, leaving McKissic as the pass catching back.

Williams offers the highest upside of the running back pick up this week. He could be the 1st and 2nd down back on a good offense with one of the best offensive lines. He could be a rest of season play. BUT, he could also be behind Jordan Wilkins who was out injured this past week. No one is sure if Wilkins will play, and in what order. I have Williams behind Scarbrough because of the uncertainty with Wilkins possibly more established as the running down back.

I have never been very impressed with Jordan Wilkins, and I am not sure that will be given the opportunity to be the guy over Williams. However, he is worth the pick up in the event that he is the running downs back for the Colts. Williams is the new shiny object, but maybe Wilkins is the trusted second year back.

In any form of PPR league I am prioritizing Hines over the other Colts running backs. He has an established track record of stepping up when Mack has been out. That was before a murkier backfield with the addition of Williams, but Hines is THE passing down back who will also get some carries.

Parker just put up 7-135 against the Bills, which is quite an accomplishment. I doubt that he is still available in your league, but if so then I love his potential for the rest of the season. The Dolphins suck and will have to keep throwing in every game. The Dolphins have an awesome schedule down the stretch versus: Browns, Eagles, Jets, Giants, Bengals.

I also doubt that Crowder is available in your league, but he has been crushing it the last three weeks. Definitely check to see if he is available.

I was very hesitant to buy into Cobb, but his weekly output has spoken for itself the last two weeks: 6-106-1 and 4-115-1. With Dak playing as one of the best quarterbacks in the league it seems two wide receivers will pop weekly. So roll the dice with Cobb and see how things work out. With the Patriots and Bills on deck the opposing defenses will likely scheme Cooper out of the picture.

I actually like Hollister this week and rest of season. Wilson has come to trust him, and has been using him in the red zone… and all over. Coming off of the bye that had Tyler Lockett rehabbing a severe contusion such that maybe they will ease Lockett in and have Hollister play a more regular role throughout the game.

Griffin has quietly been a top 10 tight end, but because we all waited for Chris Herndon to return we thought it was just a blip. Now with Herndon on IR Griffin has settled into a trusted target. Craziest part of his role on the team is that it’s almost as if he is what we expected Robby Anderson to be. Griffin has several 30+ yard touchdowns. Ride him while he is hot!