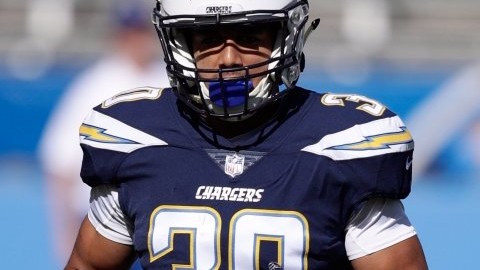 With most leagues starting the fantasy playoffs in Week 14, this means that Week 13 could be your last shot to earn that win and sneak your crappy ass team into the big dance. If you're on the bubble, hopefully you can add the right players to give you a win and put you in. If not, it's not my fault. Blame someone else. Maybe the dude or dudette that you see in the mirror. Just not me...

However, just because you may have already earned your spot in the playoffs, that doesn't mean you should take this week off and rest on your laurels. No, no, no... You need to get off your ass and try to build a better team for when your playoffs start, and that begins right now with this week's waiver run. Give yourself a better chance to not only make it into the playoffs, but to make a run deep into the playoffs.

I know this quarterback situation in Tampa is a bit of a mess, but whether it's Jameis Winston or Ryan Fitzpatrick who gets the nod, both have been fantasy studs...as long as you take out the turnovers. Fortunately for Winston, it's his show now and he didn't have a single interception or fumble last week and hopefully that means his grip on the gig is a little firmer. The Bucs have two home games up next against the Panthers and Saints, who are both susceptible to being beat in the air, so Winston needs to be owned in all leagues for the playoff push.

It's not hyperbole to say that Lamar Jackson could be the best rushing quarterback the NFL has ever seen.

I'm not sure if Lamar Jackson is a running back or a quarterback, but with the rushing yards he's capable of putting up, he can definitely help your fantasy team earn a win. In college, Jackson rushed for over 1,500 yards in each of his two last seasons, and in his first two NFL games, he combined for 190 yards and a touchdown on the ground. Those are some running back numbers! He has Atlanta, Kansas City, and Tampa coming up on the schedule and I think his passing numbers will continue to improve as he gains more experience. While he may be a bit of a risk, Jackson has the upside to be a fantasy league winner down the stretch.

This may be a homer pick because Dak was one of the players I touted this preseason as being a good sleeper pick, but in case you hadn't noticed, Prescott has been playing really good football over the last month. In the four games since their Week 8 bye (where they also acquired Amari Cooper), Prescott has been the QB7 in fantasy football and seems to be hitting his stride. With matchups against New Orleans, Philadelphia, Indianapolis and Tampa over the next four weeks, Dak could provide a helpful fill-in for quarterback needy teams.

With the news of Melvin Gordon missing multiple weeks due to a sprained MCL, I expect Austin Ekeler to go from being roughly 55% owned in ESPN leagues, to likely over 90% after this waiver pass. Ekeler's strength lies in his receiving abilities as evidenced by his ten catch performance last week against Arizona, but at 6'0" and 200 pounds, he should be able to handle a full workload in the rushing attack as well over the next few weeks. There is no lock that Gordon will be back before Week 16, and that makes Austin Ekeler my top waiver wire target for Week 13 and he could be a difference maker in your fantasy playoffs.

Gus the Bus has has now put up two good games in a row...can he make it a third?

Undrafted Gus Edwards has made a name for himself over the last two weeks as he went 17/115/1 against the Bengals in Week 11 and then 23/118/0 in Week 12 against the Raiders. Alex Collins sat out last week due to a foot injury, but it appears that Edwards has snatched control of the backfield even if Collins returns in Week 13. He likely won't give you anything in the receiving game, and that makes him more valuable in standard versus PPR leagues, but Edwards could be a nice addition to your squad regardless of the format.

With Leonard Fournette sitting this one out due a one-game suspension for joining in some fisticuffs with the Buffalo Bills this past weekend, either TJ Yeldon or Carlos Hyde could be a nice one week fill-in for a running back needy fantasy team. The only problem is figuring out if one of them will assume full-time duties or whether they will share the work load this week. With Yeldon showing early on that he can be successful for the Jaguars as well as the fact he is better catching the ball out of the backfield, I'm going to advise picking up Yeldon before Hyde if you need a back to play this week.

Marlon Mack suffered a concussion in his Week 12 matchup against the Dolphins and with the unpredictability of concussions, it's unknown whether he will be ready to return this week. His upside is capped due to the fact that the Colts are facing off against the Jaguars in Week 13 who have surrendered the fewest fantasy points per week to opposing running backs (per ESPN) this season, but if you're desperate in PPR leagues, Hines could have moderate value.

Rex Burkhead, New England - Burkhead returns from the IR this week but will likely be third on the depth chart behind Sony Michel and James White.
Theo Riddick, Detroit - He's averaged seven targets per week in his last four games and the game script should be in his favor this week as I expect the Lions to be playing from behind against the Rams from the coin-toss on.
LeGarrette Blount, Detroit - Will only have value if Kerryon Johnson misses Week 13, but showed enough against a tough Bears defense that he can have value if given the chance.

DJ Moore has all the makings of a future superstar in this league.

With Torrey Smith out, DJ Moore stepped up his game and some were wondering if he could hang on to that role once Smith returned. Well, with Smith back this week, Moore still had eight receptions for 91 yards and played on 92% of the team's snaps versus only 22% for Smith. Moore is the number WR5 in PPR leagues over the last two weeks and is going against the Tampa's laughing stock of a pass defense in Week 13. He should not only be owned, but started in all formats this week.

I'm not quite so sure how Adam Humphries is only owned it 28% of ESPN leagues, but that needs to change this week. He's the number seven PPR wide receiver over the last five weeks and is doing it with both volume and touchdowns. He has Carolina and New Orleans on the docket coming up and while he doesn't have the ceiling that DJ Moore has, he has a nice floor that should be able to help you out the next few weeks.

Since he sat out last week, a little bit of the hype has worn off of Tre'Quan Smith's 10/157/1 performance against the Eagles two weeks ago, but if he can return this week, he could be in for a good run. The Cowboys have stud corner Bryon Jones who should see a lot of Michael Thomas, and that could open things up for Smith to have another good game. His foot injury is something to watch out for, but if he goes, Smith is a nice, high-upside flex option for Week 13.

Josh Reynolds, LA Rams - Reynolds lit up the Lions for six catches, 80 yards and a score in Week 11, and he looks to have taken over the Cooper Kupp role in the Rams high-scoring offense.
Robert Foster, Buffalo - Two solid weeks in a row, but he's the definition of a boom or bust fantasy option.
John Ross, Cincinnati - Three straight weeks with scoring a touchdown, but hasn't topped 39 yards over that span.

With no OJ Howard, Cameron Brate could be really good down the stretch for the Bucs

I thought he would have been more widely owned after OJ Howard was placed on the IR last week, but somehow Cameron Brate is still only owned in 53% of ESPN leagues. With the state of the tight end position, he needs to be owned in virtually every league going forward.

It took him a little bit to get going, but Jonnu Smith has been finding his stride lately. He now has double digit fantasy points (PPR) in four straight games and looks to be a nice option if you're struggling at the tight end positon.

Gerald Everett, LA Rams - Scored two touchdowns in their last game against the Rams and could assume a larger role with Cooper Kupp out for the season.
Chris Herndon, NY Jets - Had a good game against the Patriots last week and isn't too far removed from three straight games with a touchdown.