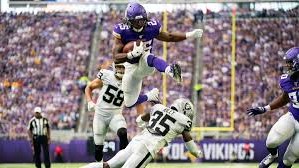 Minshew Mania is BACK! With Minshew’s return we can hopefully see the rebound of DJ Chark who fell off last week, but maybe that was just a down game. Minshew has a nice safe floor for all your streaming playoff teams that have a stacked roster outside of your QB, I’m looking at you Jared!

I debated on putting one and only one QB on my Waiver adds this week, but I realized Fitzpatrick is probably owned in all your leagues. Considering he isn’t actually owned in every league, I feel it’s necessary to repeat what I’ve been saying for weeks. I LOVE Ryan Fitzpatrick for fantasy. Yes, it’s your fantasy playoffs. Yes, it’s hard to trust him as your NFL team’s QB. Yes, is a Bad Ass Mo Faux for your fantasy roster.

RB – RB pickups in order of how I would claim them, and I would start all 4.

Alexander Mattison is awesome at football, but unluckily for him he is behind a top 5 back in the NFL. Luckily for Mattison, however, is the injury history of Dalvin Cook. With Cook battling a shoulder injury it is anyone’s guess how many snaps Cook will actually see. If you have Mattison, play him, or pick him up. He should be a worst a RB2, and at best a top RB this week. The real difficulty for me is what to do with Cook… Hopefully he doesn’t play.

Snell is now the lead back in Pittsburgh, or at least until Conner is back. If Conner is out and you need a starter this week, then Snell should be a RB2 or Flex at worst. Against the Cardinals terrible defense, I fully expect that Snell will have a great game, better than he had this week. He should be over 70 yards and a touchdown.

Mostert has been my favorite running back for the 49ers for a few weeks now. I prefer him to Coleman for several weeks, even though he wasn’t getting the workload, and then Breida has been injured. Mostert was finally unleashed against the Ravens and he did not disappoint for 19-146-1. Dude is a beast! While the New Orleans rush defense is tough, and Breida should be back, and maybe Coleman is more involved… I don’t care. Mostert needs to be rostered in all formats.

This week the Chiefs get the Pats. This week Damien may be playing. This week McCoy should be playing. But this week Darrell Williams is out, which means Darwin is a must own in the event that Damien sits, and McCoy is deteriorating from old age. I’m not sure how high his ceiling is against the Chiefs, but Darwin hits homeruns, and Duke Johnson did pretty well last week against the Pats.

Second week in a row for High-end Handcuffs (in order):  TonyPollard, Gus Edwards

With Hilton out, Chester Rogers out, Eric Ebron out, and Marlon Mack out. It is up to Brissett and the Colts to rely on Johnathan Williams, Zach Pascal, and Jack Doyle. Who do the Colts play this week? The Bucs who pretend to have a pass defense. Pascal should have a high target floor, and should do well against this defense.

Washington hasn’t had a high target floor, but he has done the most with his targets. I think Washington is solid start this week and moving forward. Devlin Hodges seems to be growing in his trust, and this week they are playing the sieve that is the Arizona Cardinals defense.

John Ross was a beast to start the season, and I have no problem starting him after this week. Unfortunately, I am on the fence about starting him this week. BUT, who is auditioning for a starting gig, and looking to add a couple millions per year to his next contract...? Andy Dalton. I’m hoping Dalton looks Ross’s way to get him involved early and often and blow up the scoreboard!! (is that possible with the Bengals?)

Doyle is the only trusted receiver in this passing attack. While I do like Pascal this week, I actually like Doyle more as a trusted veteran presence to be an outlet for Jacoby. The Bucs have a great rushing defense, so hopefully Doyle becomes an extension of that with short quick passes and over the middle throws.k

Gesicki has had a solid few weeks, with a high target floor. I love me some FitzMagic, and Gesicki is the second read after Devante Parker.

I love Hollister and have been playing him in the leagues I have him. With Lockett having an injury and then the flu, Hollister stepped up to lead the Seahawks in targets. While the Hawks are a run heavy team this time of year, Hollister is a go to target for Wilson.