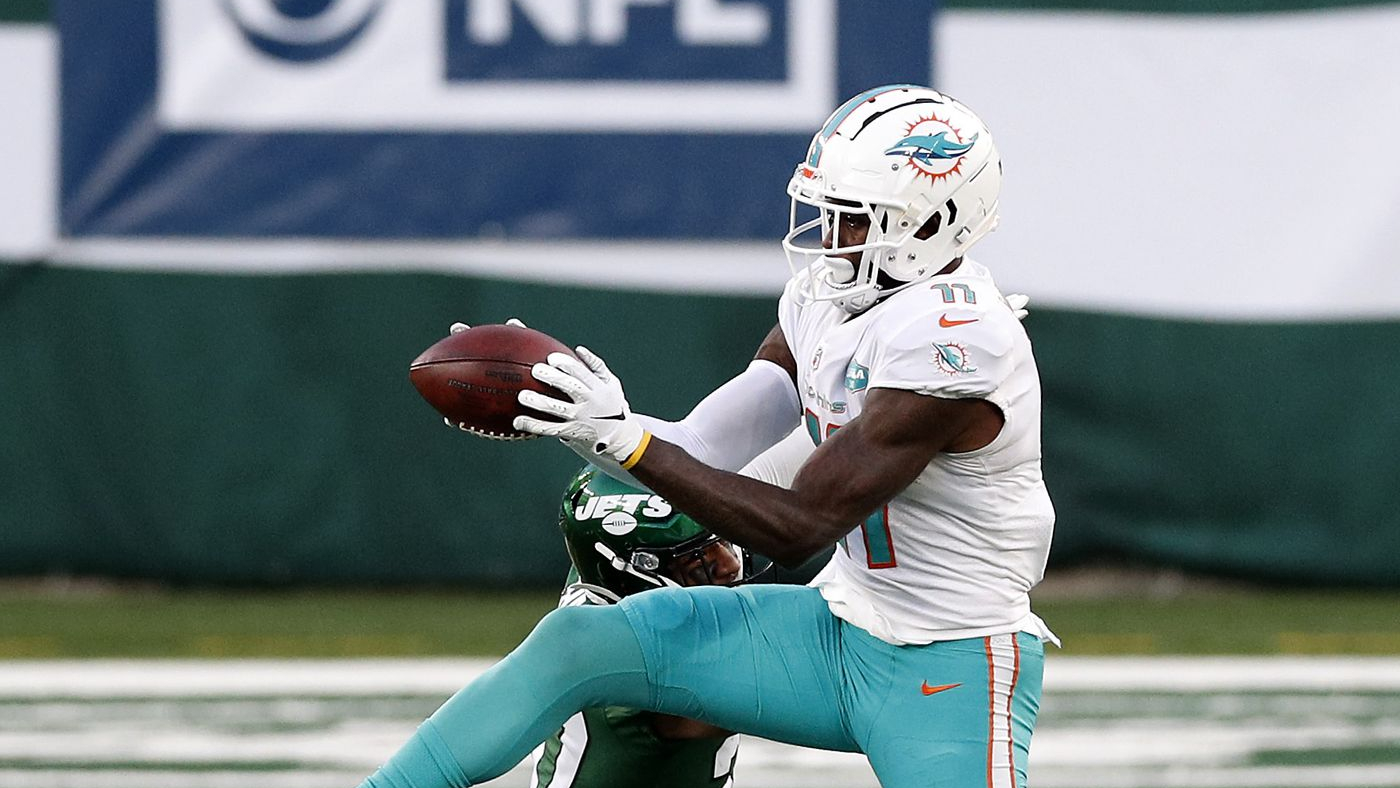 It’s that time of year when I’m extremely thankful for DFS. We can’t make the playoffs in every league, and DFS allows us to keep the fantasy grind going. This week is going to be insane with two Saturday games and all the COVID cases that have popped up league-wide (and I’ll give you fair warning, the word COVID is going to come up very frequently in this article). With that, let’s get started and win some cold hard cash in this final stretch of the NFL season! 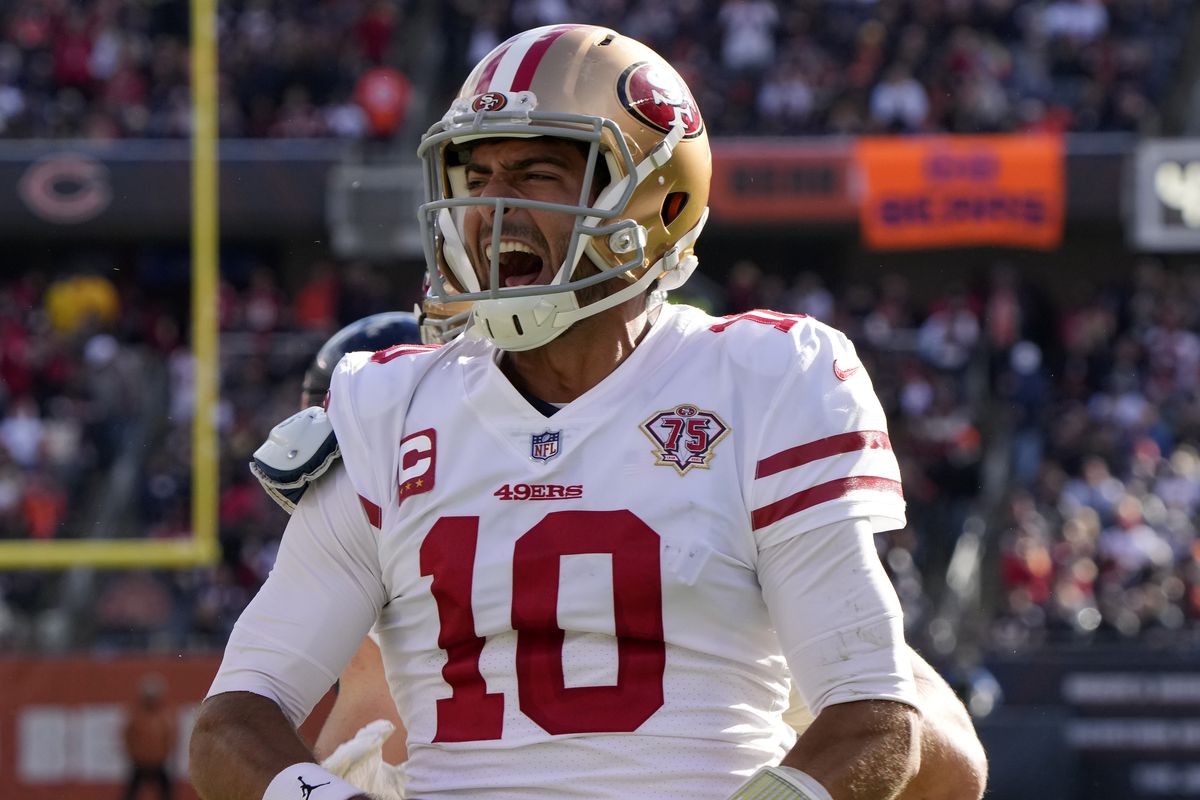 All the off-season talk about Trey Lance overtaking Jimmy Garoppolo’s starting job seems like a distant memory, as Jimmy G has been incredibly consistent in the second half of the season. Since Week 8, Jimmy G is averaging 16 fantasy points per game and has thrown multiple touchdowns in five of those eight games. In Week 15, the 49ers face the Atlanta Falcons who have allowed 20.55 fantasy points per game to the quarterback position on the season, second-worst in the league. This 49ers offense is rolling, and Jimmy G will most likely have a low roster percentage, giving you the edge in your Week 15 lineups. 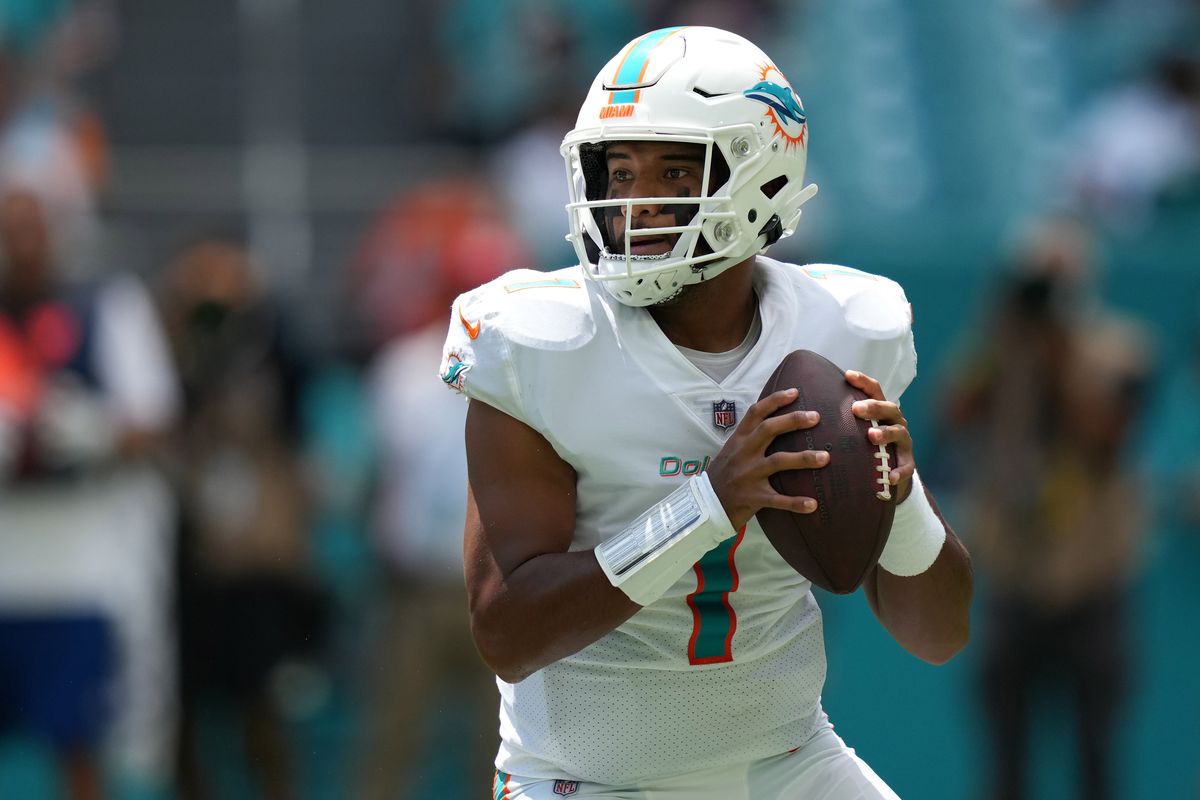 If it seems like Tua Tagovailoa shows up on this list every other week, it’s because he does. He’s consistently undervalued in DFS, but you can capitalize on that! Over the past four games, Tua has completed an insane 78% of his passes, and this week, the Dolphins face the New York Jets. In the Week 11 matchup against New York, Tua completed 27 out of 33 passes for 273 yards and two touchdowns. He also did that without DeVante Parker, but now Parker is back in action. With a full pass arsenal against the Jets at home, Tua is set up for a monster return on his salary. 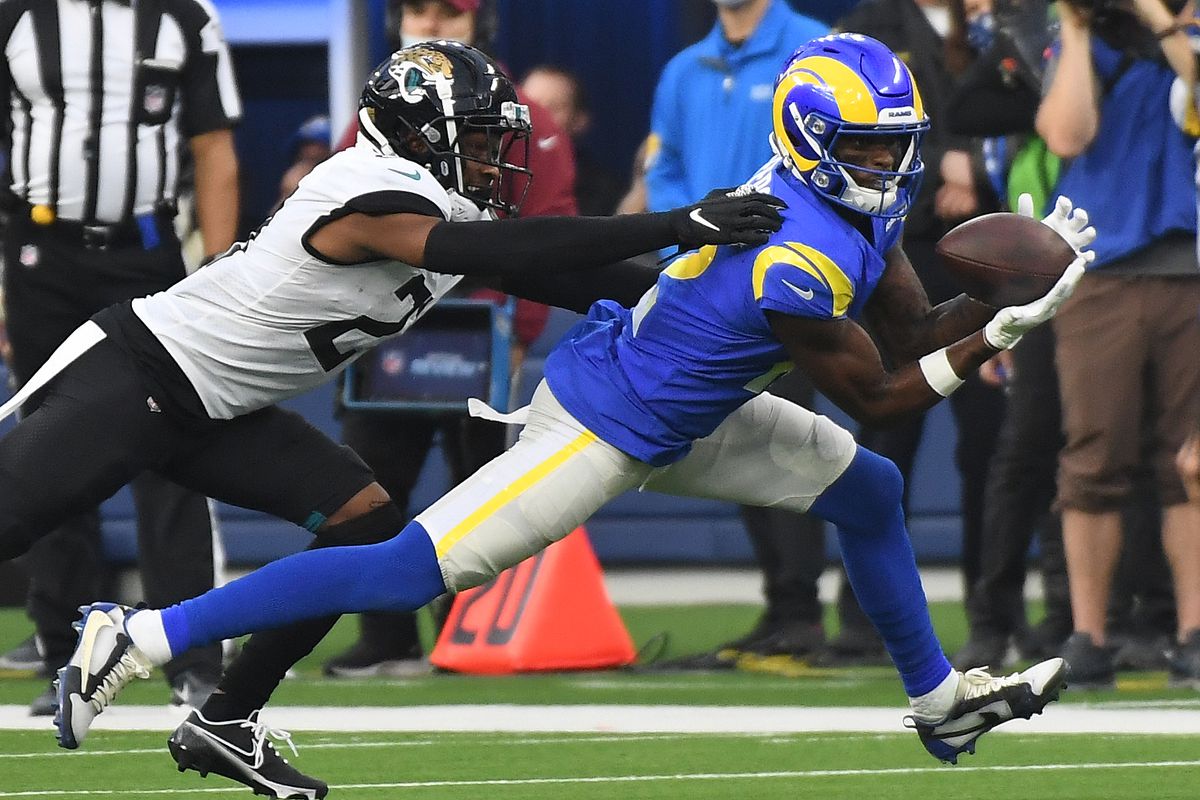 Van Jefferson has been solid in his own right as of late, finding the end zone three weeks in a row. However, his value in Week 15 skyrockets, as Odell Beckham was placed on the COVID list on Tuesday, leaving Jefferson as one of only three healthy receivers. Jefferson will likely line up against Sidney Jones, a cornerback I brought up in last week’s article. Jones is very exploitable; he is 108th in total yards allowed, 99th in receptions allowed, 91st in touchdowns allowed, and 87th in yards per reception allowed. If real-life stats aren’t your thing, the next part is the takeaway from this matchup. In 2021, Jones is 103rd in fantasy points allowed per game. Jefferson will probably be chalky this week, but the volume he’s going to receive at his salary is too good to pass up. 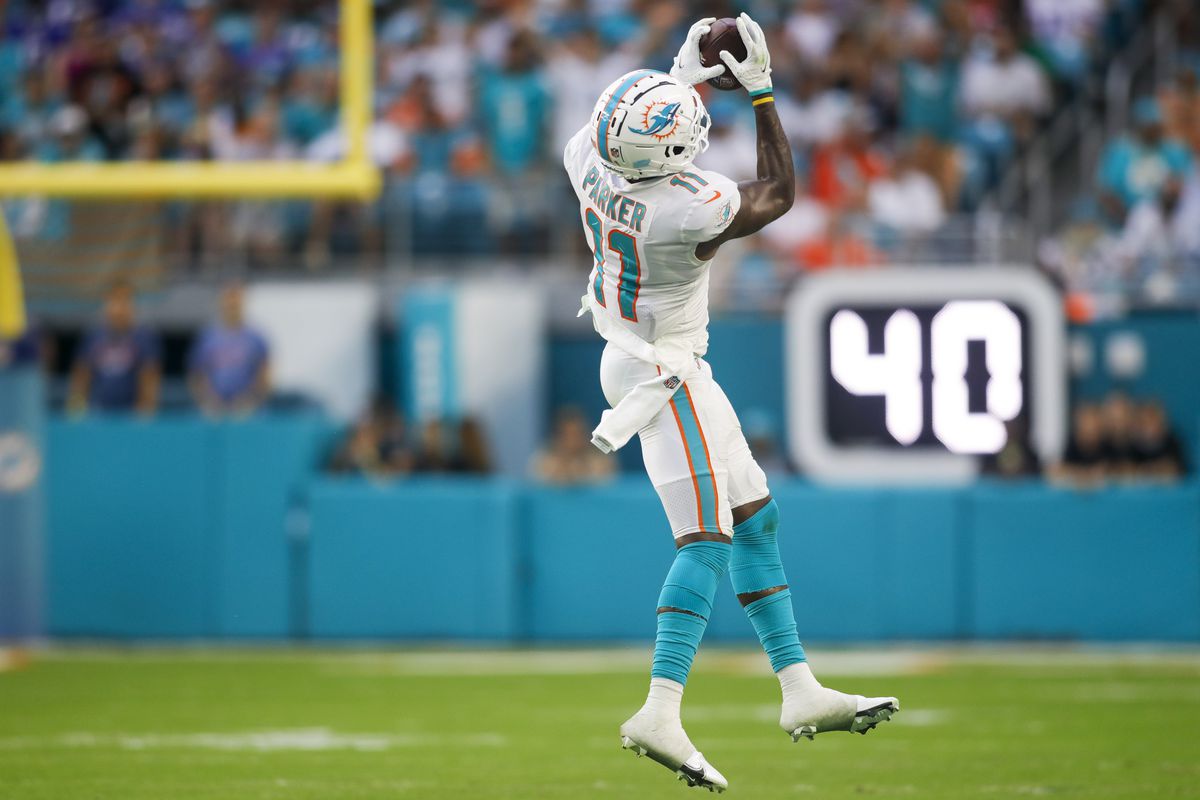 DeVante Parker has missed his fair share of the season due to injury, but in the games he has started, he’s been a consistent producer, averaging eight targets and 65 yards per game. He also ranks 16th in air yards share at the wide receiver position. This week, the Dolphins face the New York Jets, and, y’all, the matchup with Bryce Hall is absolutely incredible! Hall ranks 148th in receptions allowed, 142nd in yards allowed, and 120th in fantasy points allowed per game. The Dolphins also have three running backs on the COVID list, so their run game is going to be damn near non-existent, leaving enough targets to go around for everyone. I don’t know if this salary is a typo, but either way, this is a smash play for me. 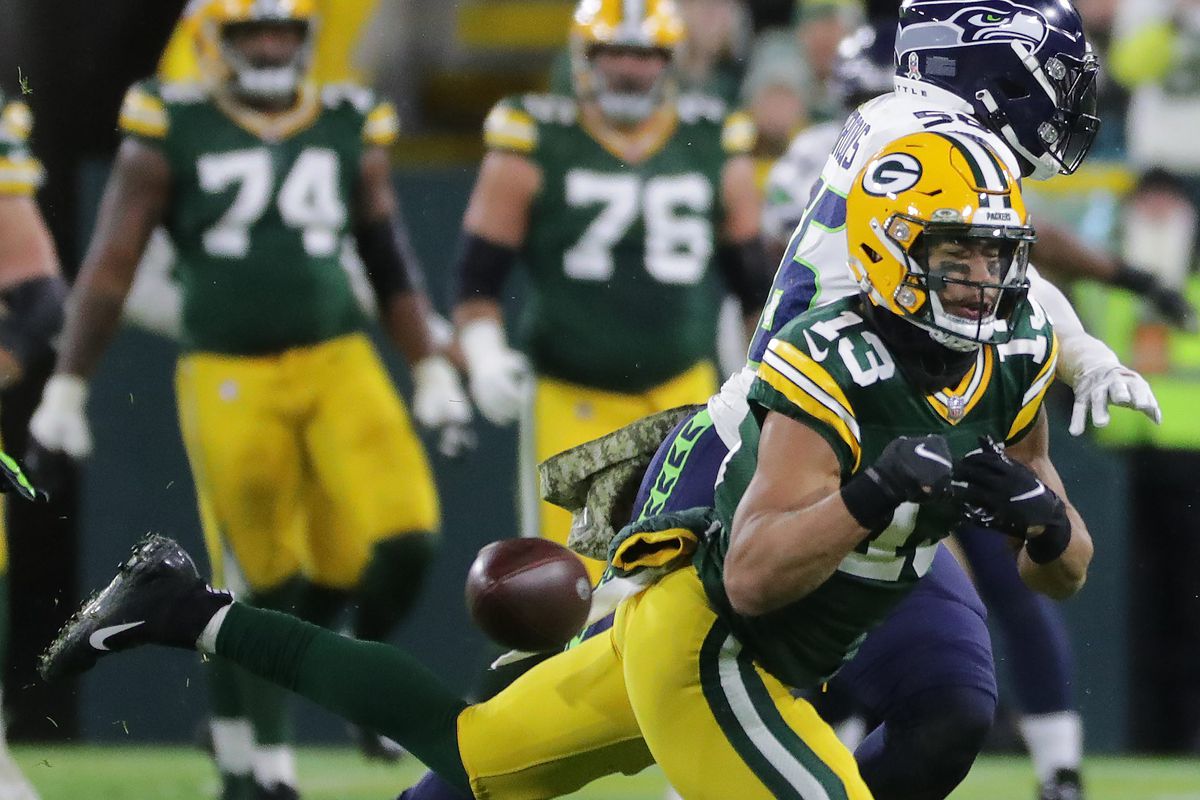 After Randall Cobb was placed on IR, Allen Lazard took over the role, and boy, did he capitalize on it in Week 14. Lazard ended the game with six receptions on seven targets, 75 yards, and a touchdown. This week, Lazard will face the Baltimore Ravens and Tavon Young. It’s an insane mismatch in terms of pure size, as Lazard is 6’3” and Young is 5’9”, but Lazard also has a massive advantage in terms of his speed score. Per PlayerProfiler, Lazard ranks in the 88th percentile with a speed score of 107.9. Young, on the other hand? His speed score is in the 36th percentile at 89.9. Young also ranks 102nd in catch rate allowed and 108th in pass break-ups. Aaron Rodgers is a magician when targeting his slot receivers, and I will be shocked if Lazard doesn’t hit over 20 fantasy points again this week. 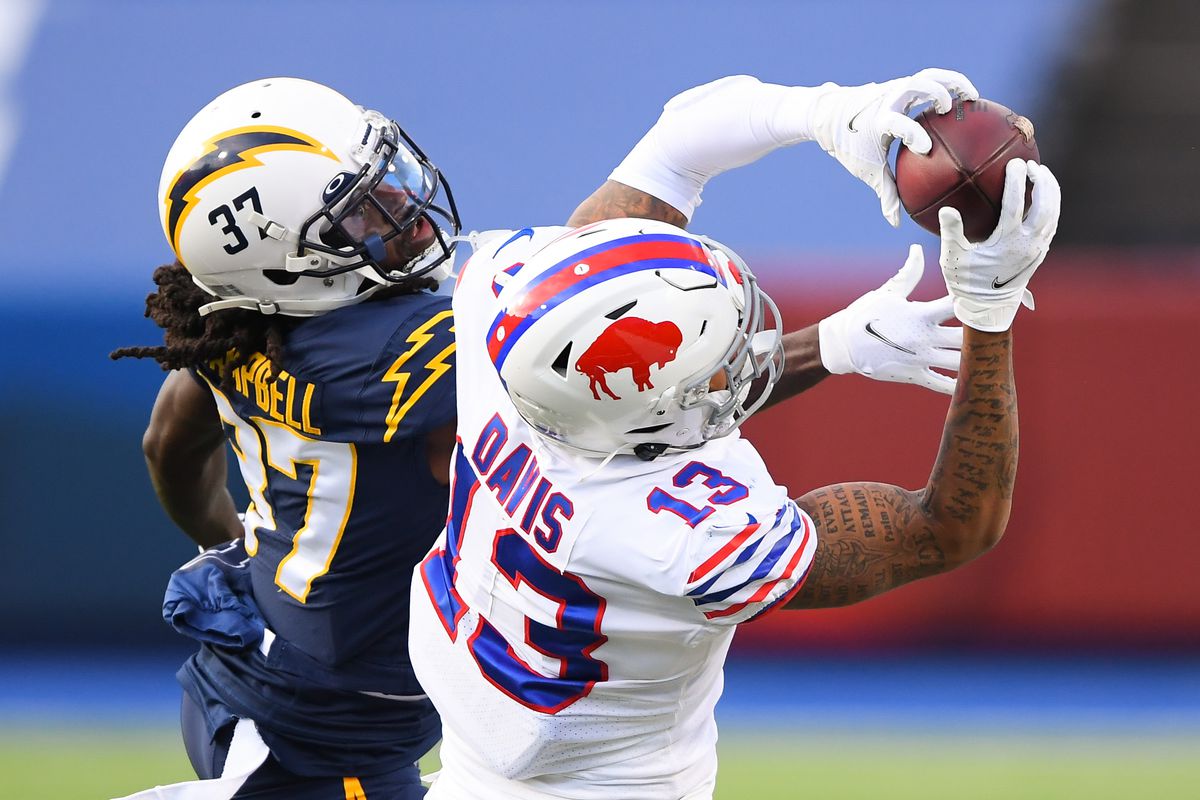 Emmanuel Sanders left Week 14’s matchup against the Tampa Bay Buccaneers with a knee injury, and in his absence, Gabriel Davis stepped up in a big way.

Davis hauled in five catches for 43 yards and a touchdown while seeing a season-high number of snaps. Sanders remains week-to-week, so while Sanders is out, we can look for Davis to continue seeing high volume. In Week 15, Davis should match up against C.J. Henderson, and I can’t begin to tell you how giddy that makes me! Henderson is 158th in yards allowed per target, 166th in catch rate allowed, and 131st in routes defended. On the flip side, Davis ranks 10th in target separation, 13th in yards per reception, and 11th in fantasy points per target. It rarely gets better than this, folks! If you don’t have Davis in your lineups this week, something isn’t right. Rashaad Penny has been injured for most of the season, hence why he’s flying under the majority of radars, but he opened a few eyes last week. He played a career-high 57% of snaps, carried the ball 16 times for 137 yards, and found the end zone twice! After that performance, the usually reserved Pete Carroll admitted that Penny had earned the right to handle lead back duties. This week, the Seahawks are facing the Los Angeles Rams who haven’t been the dominant defensive force they once were. They are allowing 21.87 fantasy points to the position over the past four weeks, coming in a pedestrian 16th in the league. Even if he doesn’t’ repeat his two-touchdown performance, I like Penny to meet value and then some. 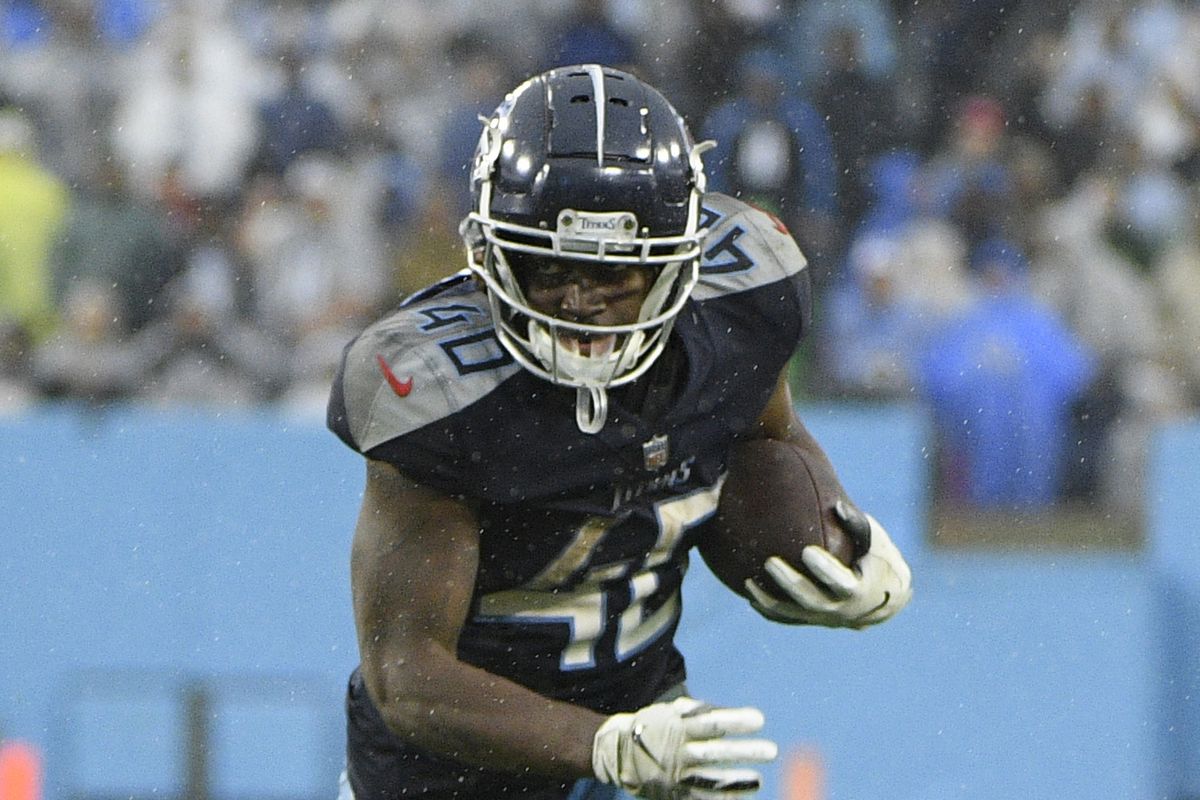 D’Onta Foreman continues to carve out his role as the main option in Tennessee’s backfield. In Week 14, he carried the ball 13 times for 47 yards and a touchdown while tacking on another two receptions for 15 yards. In Week 15, the Titans get a matchup with the Pittsburgh Steelers who, over the past four weeks, are allowing a league-worst 36.68 fantasy points per game to the running back position. T.J. Watt’s status is also up in the air for Sunday’s tilt, and if he misses, the matchup gets even better. While I’m not expecting Foreman to hit his ceiling this week, he should definitely pay off his salary. 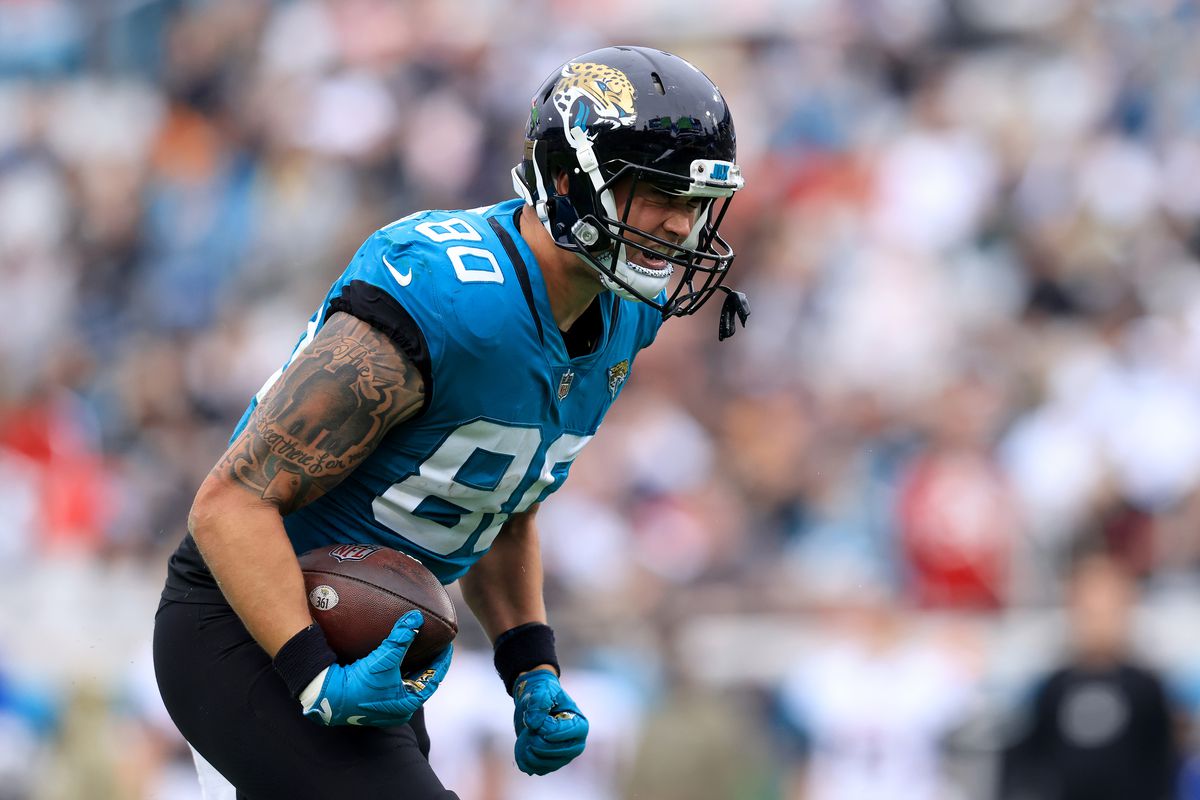 The Jacksonville Jaguars’ offense has been a roulette wheel in the worst kind of way this season, but since returning from injury, James O’Shaughnessy has been a bit of a bright spot. Although it’s not flashy, O’Shaughnessy has a respectable 17 targets and a touchdown since being activated from injured reserve. This week, the Jaguars face the Texans who are allowing 14.74 fantasy points per game to the tight end position on the season. However, the Texans lost linebacker Kamu Grugier-Hill with a knee injury and COVID and safety Justin Reid with a concussion in Week 14, making conditions even more favorable for O’Shaughnessy this week. Tight end is a volatile position, but with his consistent target share, O’Shaughnessy has a safe floor with high upside in Week 15.

The NFL is tough for rookies in general, but it’s even more difficult for rookie tight ends. Couple that with a rookie tight end on a bad team, and that can be a recipe for disaster. Brevin Jordan has somehow managed to avoid that bad narrative and generate fantasy relevance. Since his league debut in Week 8, Jordan has scored three touchdowns, and last week against the Seattle Seahawks, he saw a season-high seven targets. This week, Jordan gets another favorable matchup against the Jacksonville Jaguars. Over the past four weeks, the Jags have allowed 13.12 fantasy points per game to the tight end position, and even if Jordan only hits two-thirds of that, he blows value out of the water.