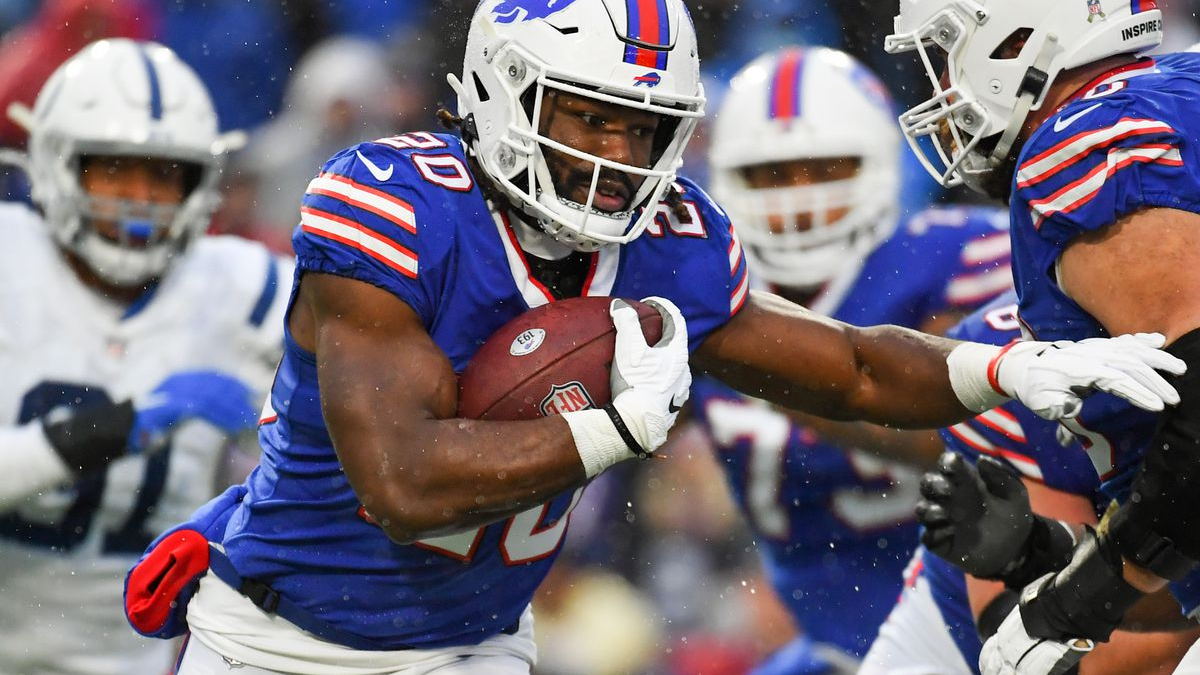 We’re in the penultimate week of the regular season, and all I can ask is, “How did it go by so fast?”. This week could be the toughest yet in terms of finding values between COVID, injuries, and lopsided matchups. Seriously. There is an entire sea of red in the value vicinity. You’ll need help sifting through the sand to find some gems, and I’m here to help. Let’s go out on a high note and win some cold hard cash! 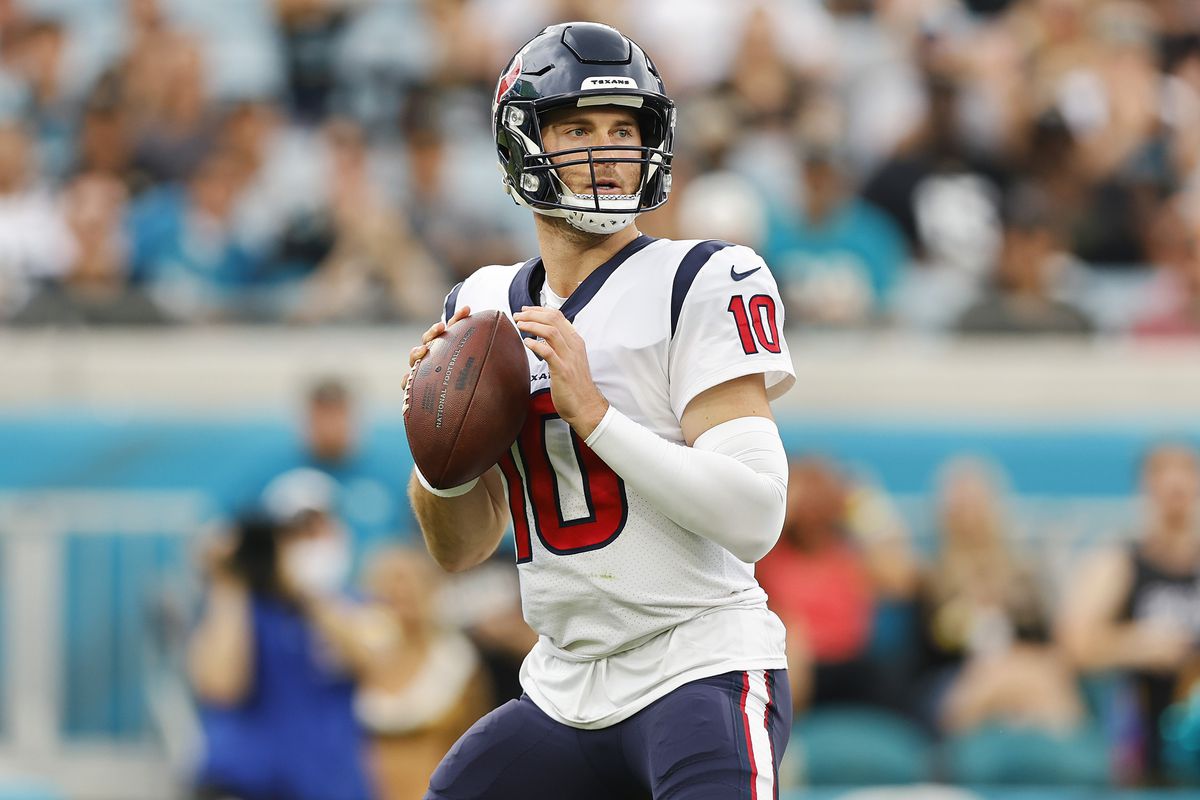 Despite playing for a team with a lack of weapons, Davis Mills has put up a respectable performance in his rookie season. He’s thrown for five touchdowns in his past three games, including two against the Los Angeles Chargers without Brandin Cooks in the mix. The San Francisco 49ers are in the middle of the pack against quarterbacks the past four weeks, surrendering an average of 16.74 fantasy points per game over that span. Mills has averaged just north of that number, so while he most likely won’t smash value, he should return and free you up for some players who will. 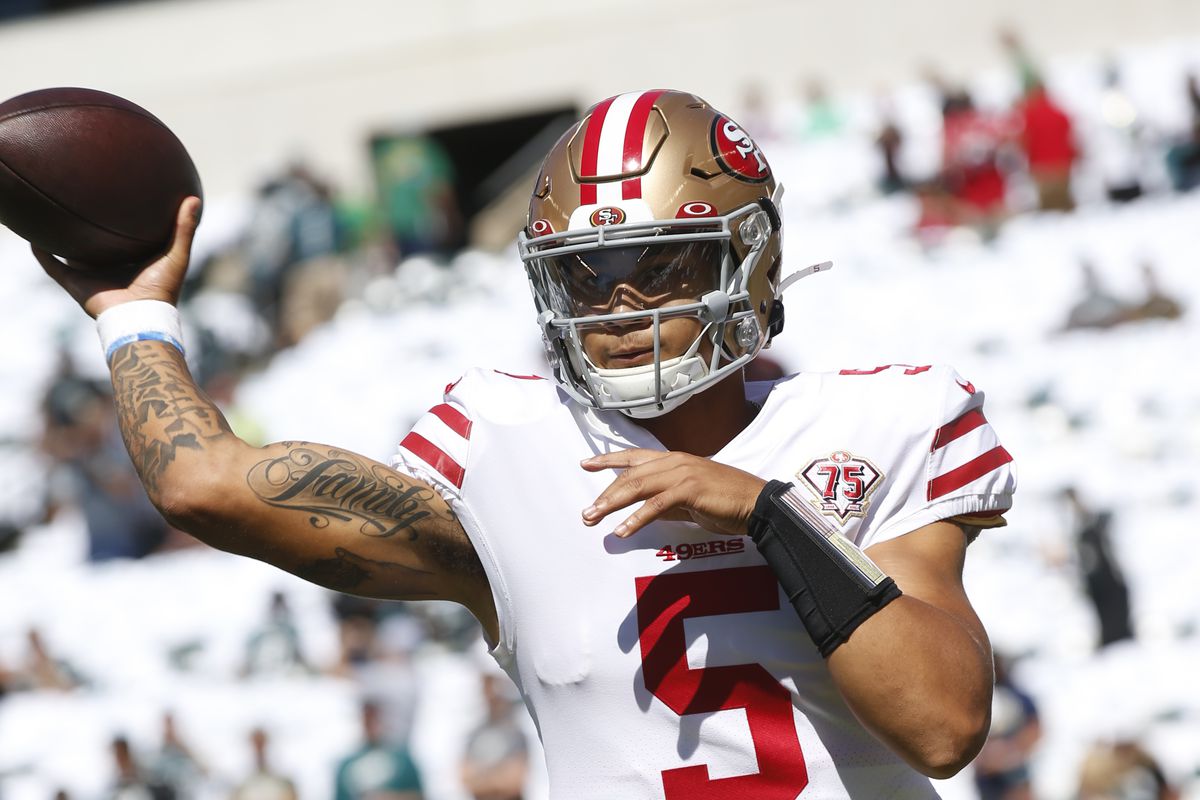 News broke earlier in the week about Jimmy Garoppolo’s chipped thumb and UCL tear, and while he hasn’t been ruled out as of yet, there is some doubt that he will play. Trey Lance truthers, rejoice! While this matchup isn’t great against the Houston Texans’ improved secondary, Lance has a ton of rushing upside. Although his 2020 season was cut short by, you guessed it, COVID, in the 2019 FCS Championship game, Lance rushed 30 times for 166 yards. He runs a 4.64 40, so he should be able to exploit the Texans’ linebackers with his speed. There’s not much to analyze, as he has only started one game this season, but at $4,800, his salary leaves a lot of cap space open to pay up for some studs in these lopsided games. 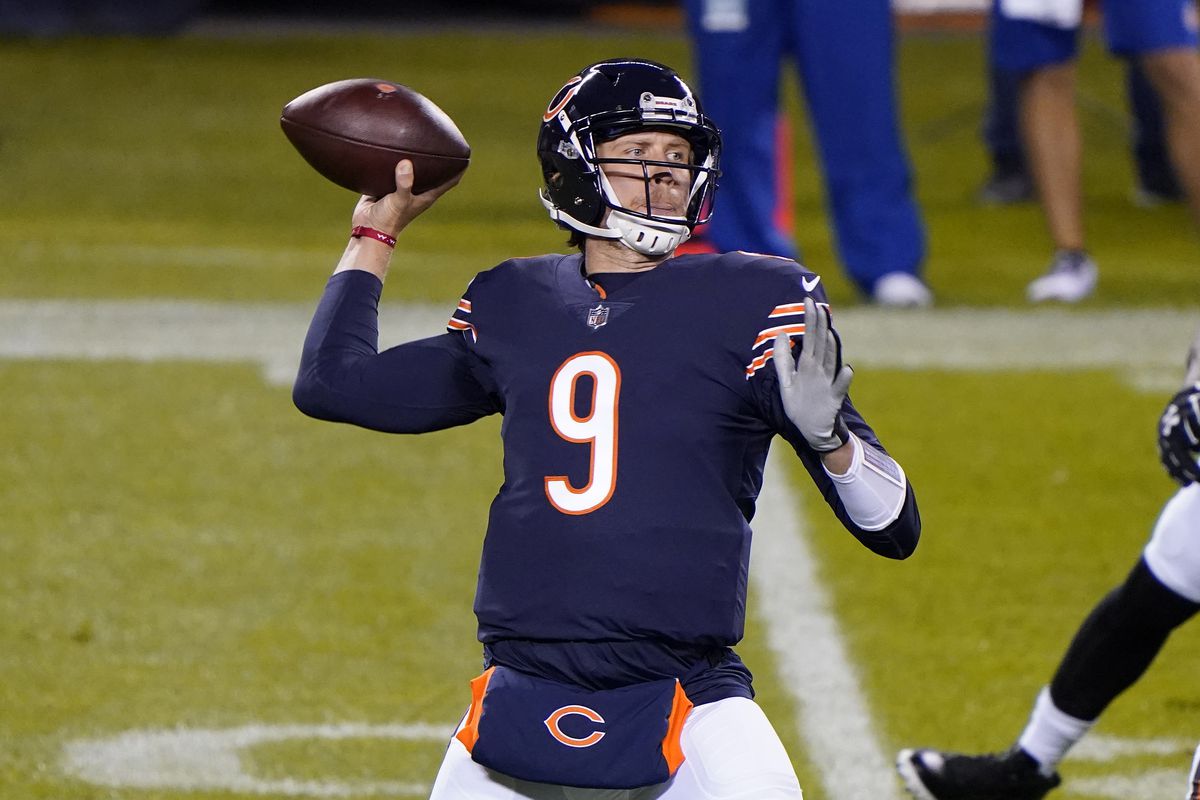 My final quarterback pick is contingent upon the health of Andy Dalton and Justin Fields, but I think Nick Foles is worth taking a look at if neither are ready to go. In a snowy Week 16 matchup in Seattle, Foles looked every bit like a competent starting quarterback, completing 24 of 35 passes for 250 yards and a touchdown. These numbers could have been higher, had head coach Matt Nagy not called a conservative first half, but I’ll take what I can get out of this offense. In Week 17, the Bears face off against an anemic New York Giants team that is allowing 17.45 fantasy points per game to the quarterback position. This is purely a dart throw and a “smash glass in case of emergency” pick, but I think he’s intriguing if Fields isn’t ready to go. 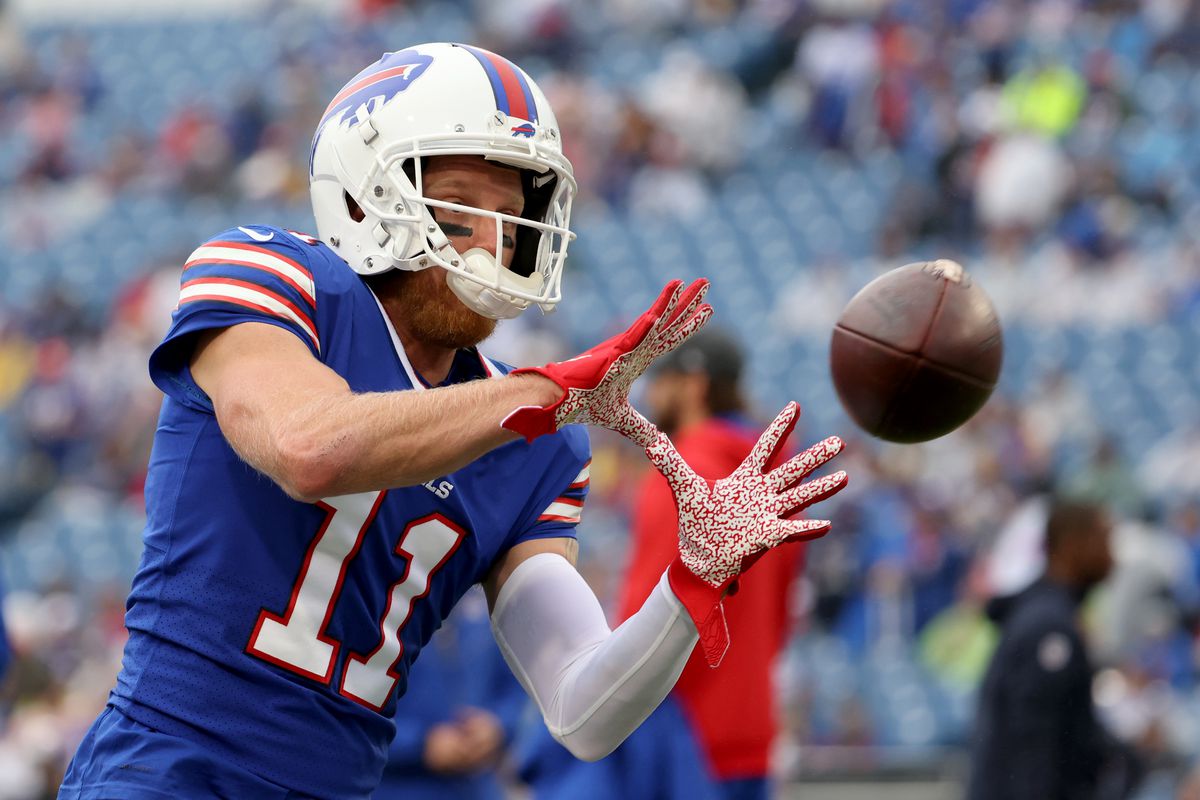 After being placed on the Reserve/COVID list as an unvaccinated player, Cole Beasley should be activated this week and be able to play in Sunday’s matchup against the Atlanta Falcons. He will likely run into Darren Hall operating out of the slot, and, boy, is this matchup sweet! Per Playerprofiler.com, Hall ranks 171st in catch rate allowed, 163rd in fantasy points allowed per cover snap, and 120th in fantasy points allowed per game. This trend should continue, as the Falcons have not had a good track record lately in the slot. In the last three games, the Falcons have allowed four receptions for 45 yards to Brandon Zylstra, three receptions for 28 yards and a touchdown to Jauan Jennings, and a whopping nine receptions for 91 yards and a touchdown to Amon-Ra St. Brown without his starting quarterback. The Falcons are very exploitable in the secondary, and if Beasley sees the average target share he’s seen lately, he’s going to have a big day. 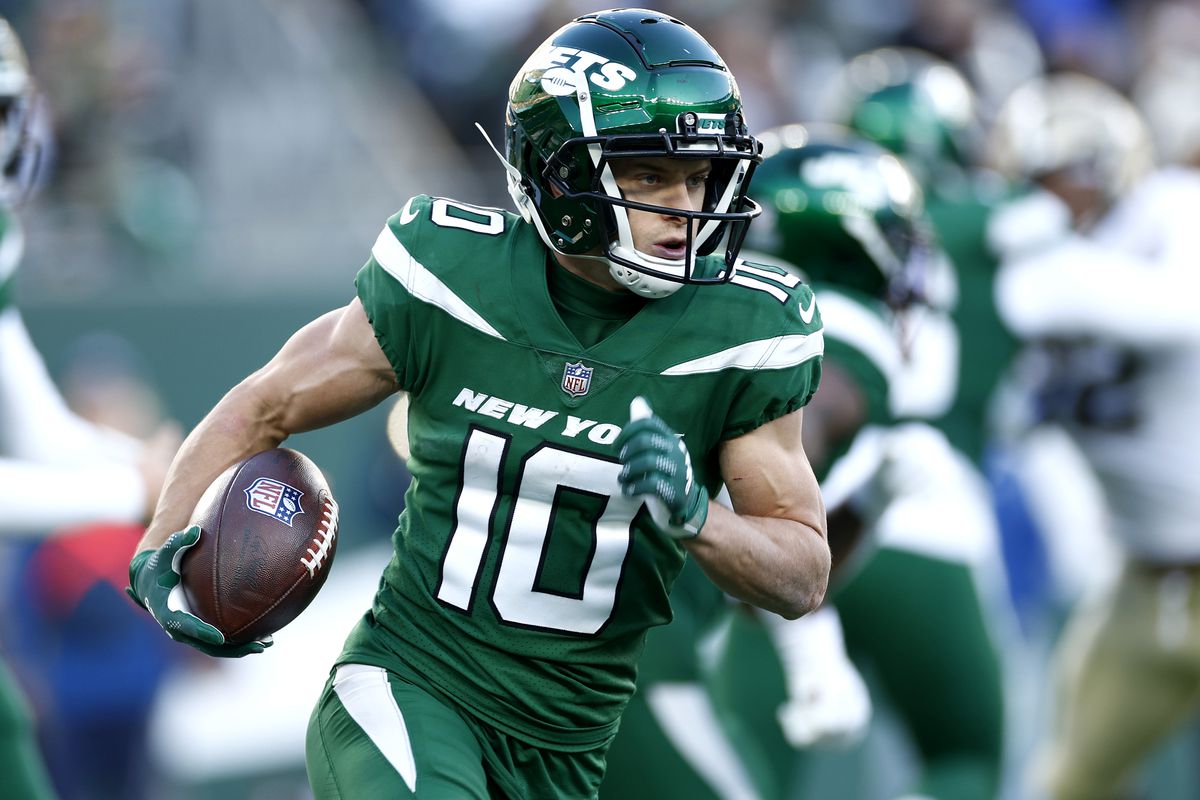 With both Jamison Crowder and Elijah Moore both out due to a combination of injury and COVID in Week 16, Braxton Berrios became the main weapon in this offense. He caught five receptions on six targets and returned a kickoff 103 yards for a touchdown. This week, it looks like the perfect storm is forming for Berrios to break out, as Crowder and Moore are both likely out. In addition to the target volume he should see, Berrios is facing a decimated Tampa Bay secondary. Sean Murphy-Bunting was placed on the Reserve/COVID list Tuesday, leaving the Buccaneers without their main slot corner. Ross Cockrell will likely be the next man up, and Berrios has the edge in this matchup. Cockrell currently ranks 131st in target separation, 122nd in touchdowns allowed, 107th in yards allowed, and 95th in yards allowed. Berrios also has Cockrell beat in the speed department, so I think he will be able to exploit his weaknesses and hit the end zone. Berrios should absolutely smash value this week. 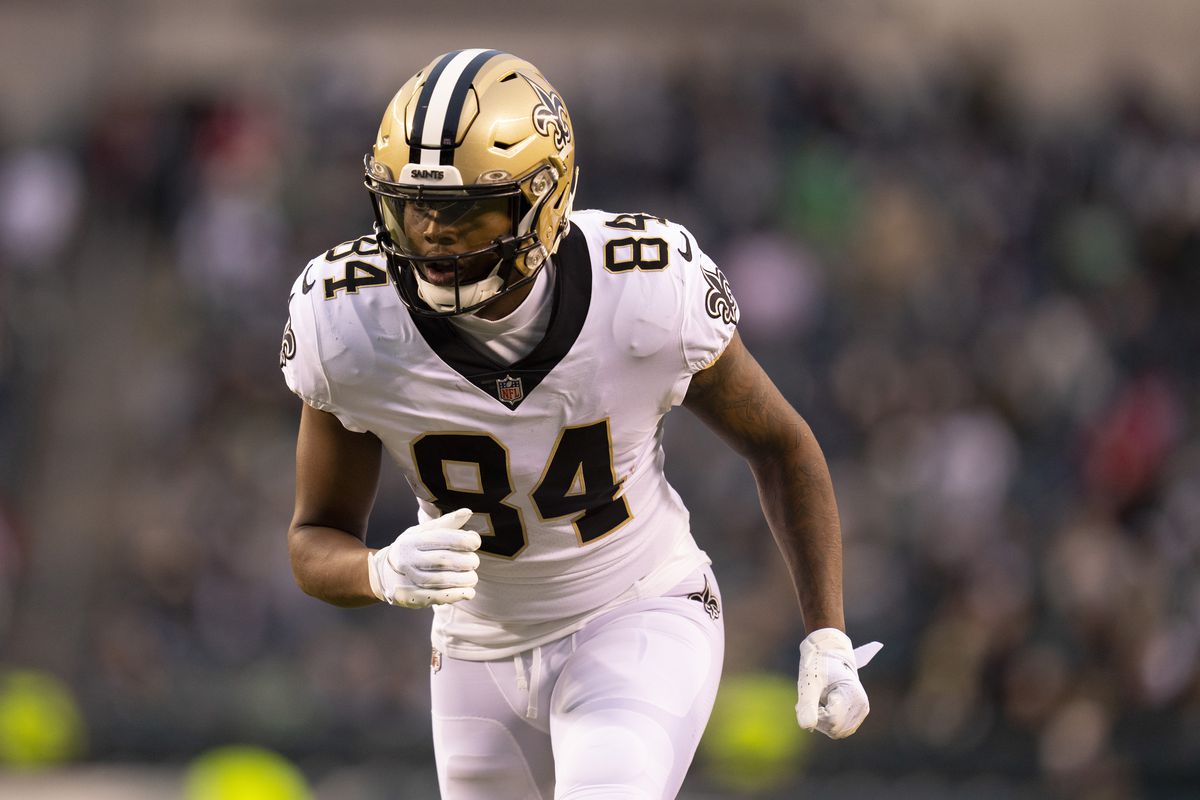 Although the next pick comes from deep in the land of dart throws, I like Lil’Jordan Humphrey this week. Over the past two games he’s played, he’s hit double-digit fantasy points, and he’s averaging 55 yards per game over the past three. The Saints are still technically in playoff contention, and after last week’s embarrassing showing, they’ll be looking to bounce back. The Carolina Panthers’ secondary has been decimated by injury, and this week Stephon Gilmore also popped up on the injury report. The Panthers are pretty good against the wide receiver position, only allowing 31.23 fantasy points per game over the past four weeks, but if Gilmore can’t go on Sunday, that frees things up for the Saints wide receivers.

After taking out a lease in Bruce Arians’ doghouse, Ke’Shawn Vaughn finally broke out, rushing seven times for 70 yards and a touchdown against the Carolina Panthers. Sure, most of those yards were on a 55-yard touchdown run, but it’s the bottom line that counts, right? The Buccaneers are huge favorites against the New York Jets, and, although Ronald Jones is the lead back in Tampa Bay, I think they utilize Vaughn if they get out to a big lead. Over the past four weeks, the Jets have given up 28.23 fantasy points per game to the running back position, and with Bruce Arians out with COVID, I can see them implementing a more conservative run-heavy approach. 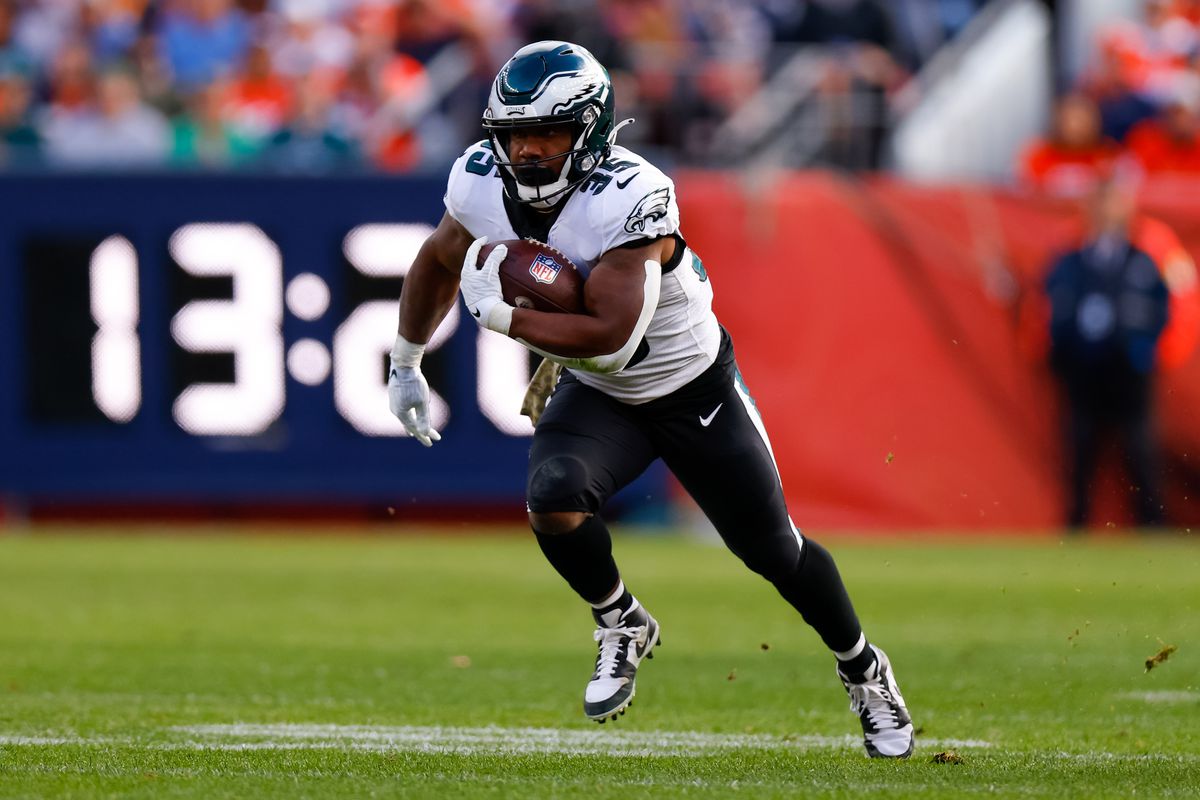 In last week’s win against the New York Giants, lead running back Miles Sanders broke his hand and Jordan Howard suffered a stinger, leaving Boston Scott and Kenny Gainwell as the only two healthy backs on the roster. The Eagles are facing the Washington Football Team in Week 17, a defense that is allowing 22.78 fantasy points per game to the running back position over the past four weeks. With Howard out of the picture, Scott should see the red zone work while Gainwell remains a passing-down/change-of-pace back. The Eagles also run the ball at the highest rate in the league, with over half of their plays (51.17%) being run plays, so as the go-to back, Scott should see plenty of volume. At only $800 above the minimum price, he's a steal. 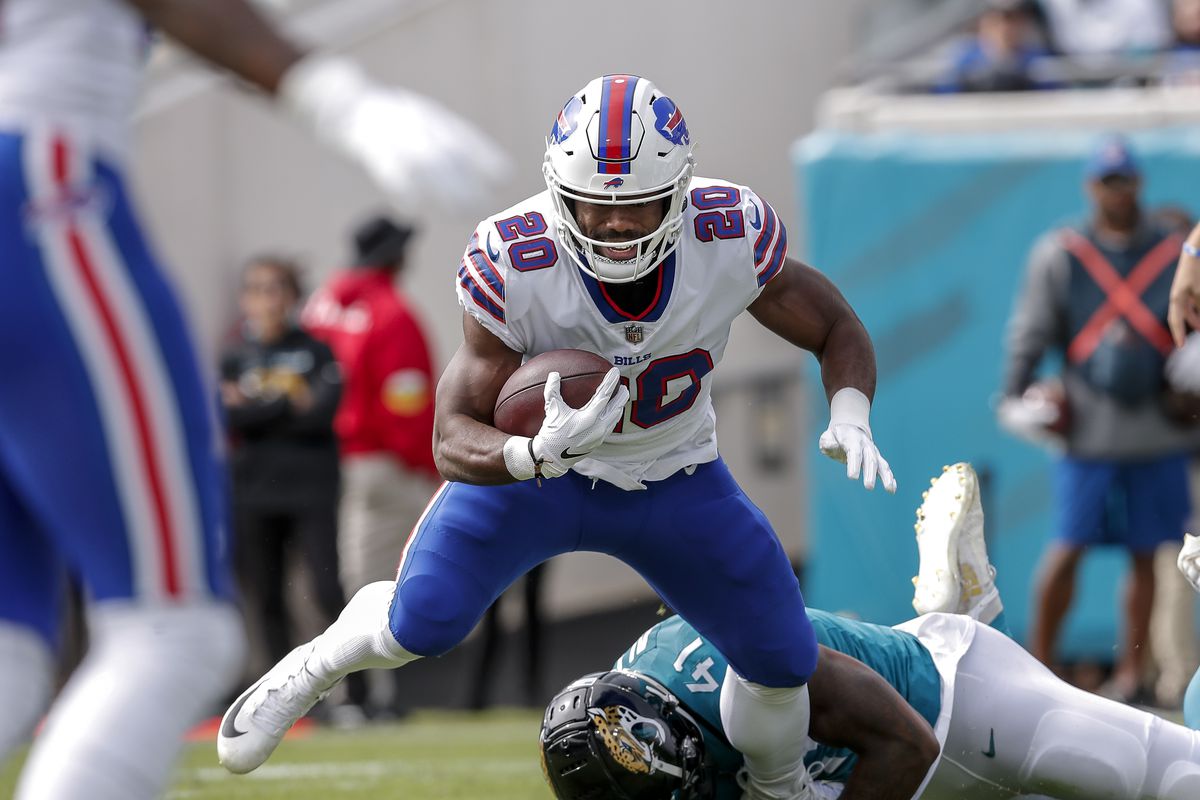 This one is a bonus, as it is purely a hunch based on the game script. The Buffalo Bills are 14-point favorites over the Atlanta Falcons, and, much like Vaughn, I expect them to utilize their backups more in a blowout game. Early in the season, Zack Moss was an efficient fantasy producer, putting up double-digit performances in the first four games he played. He’s been a healthy scratch in several games since then, but I can’t see the Bills doing that this week. The Falcons are a middle-of-the-pack defense against the run, allowing 21.78 fantasy points per game over the past four weeks, so if the workload and game script both go in his favor, Moss is an intriguing option this week. 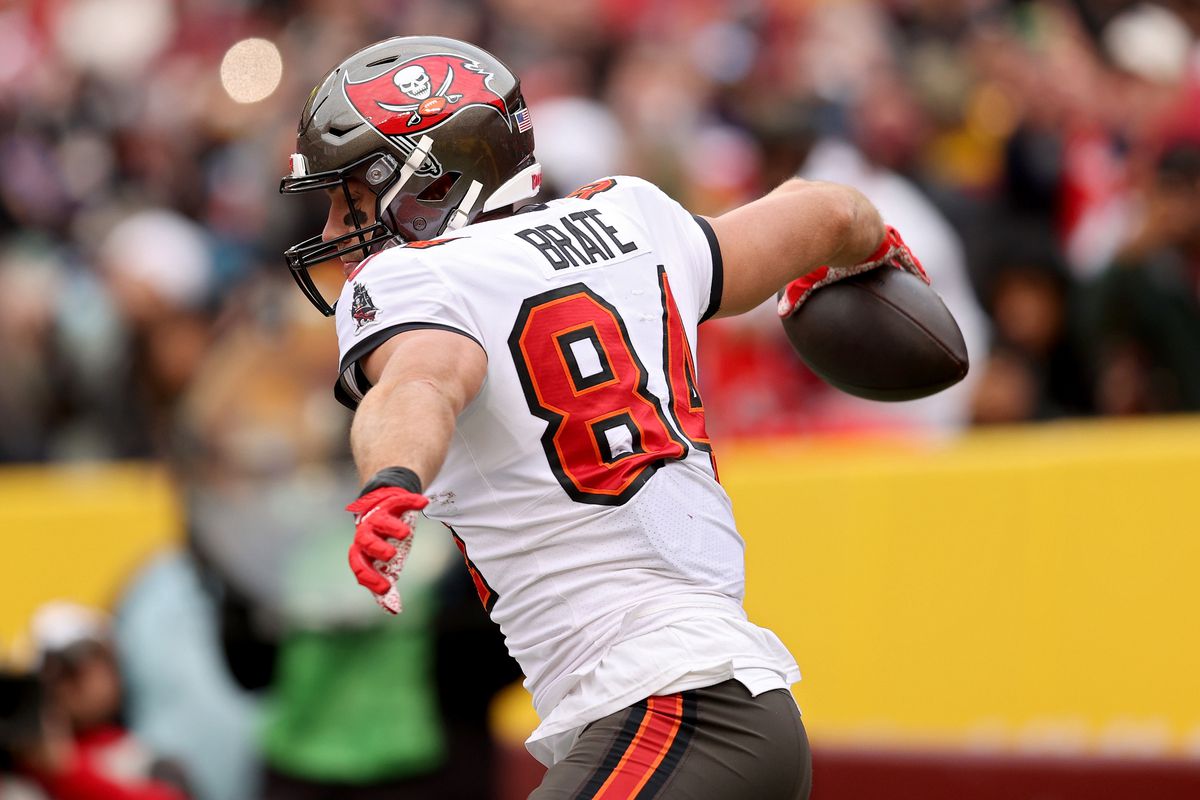 While Cameron Brate may not see a ton of targets in the Tampa Bay offense, he does get end zone looks, making him a worthy value play this week. In the past four contests, Brate has two touchdowns, which coincidentally is how many the Jets have allowed to tight ends over that span. Sure, Brate is a boom or bust option, but you have to feel good about this matchup. There will also be volume available, as Antonio Brown did not practice Thursday, Mike Evans is questionable and Chris Godwin is on injured reserve. I like Brate’s chances to score this week. 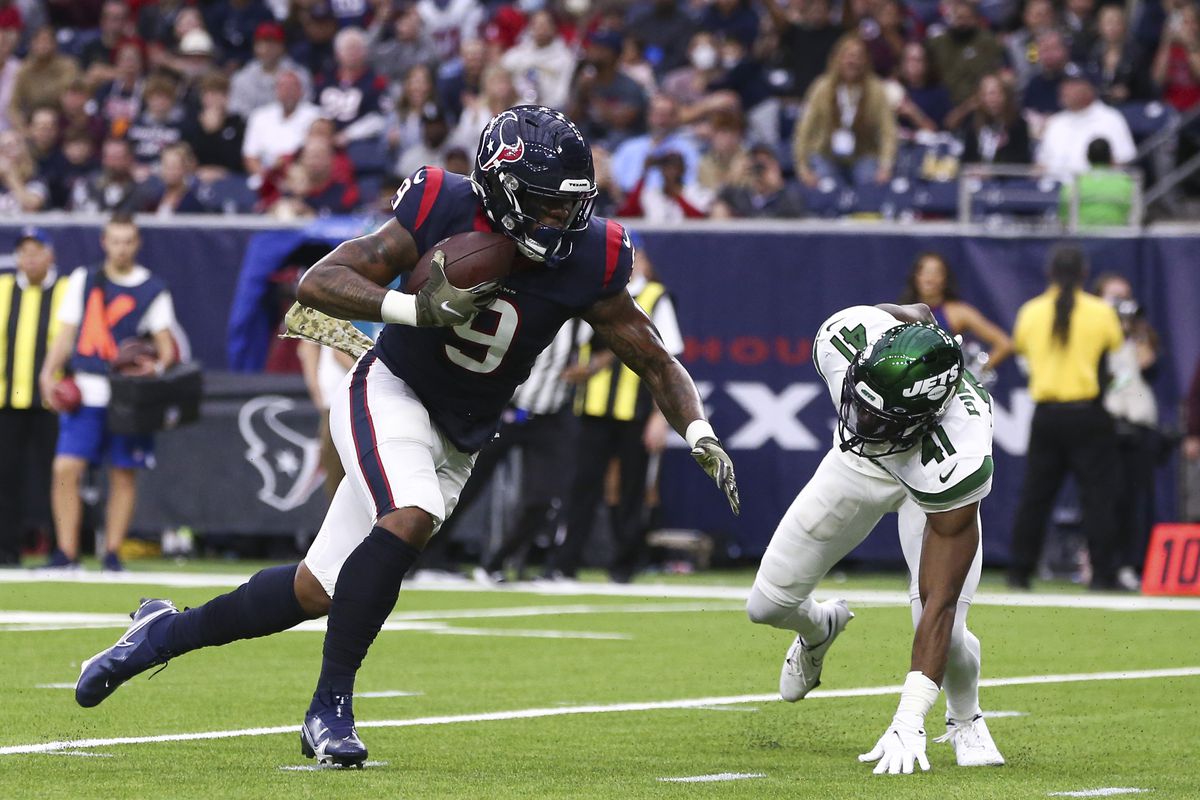 Okay, I know he was on my list two weeks ago and put up a goose egg, but we were bamboozled! That week he was technically active but didn’t play a snap due to his injury. This week, however, there are no injury designations, and he’s become the top pass-catching tight end option in Houston. In Week 16, Jordan hauled in all four targets for 56 yards. The 49ers are stout against tight ends, only allowing nine points per game over the past four weeks, but, as I’ve said nearly every week, with a value tight end, that’s all you can ask for. If Jordan can put up nine points, he’s met value, and you’ve freed up some cap space for a few pricey playmakers.