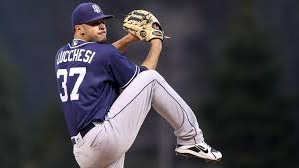 The weekend is finally here...yes!!! To me, the weekend means completely ignoring my family and tuning in to some baseball, so I'm here to help you have a good weekend as far as positive fantasy baseball results. If your league allows daily moves and you need some pitchers to help bring up your weekly totals, I have some lower owned, starting pitching options to help you bring it home. Before I reveal my weekend selections, let's take a peek at how I did on my Early Week Edition of streamers.

For lower owned pitching options, I will gladly take a 75% win rate. Let's duplicate this and take a peek at this weekend's games!

Plagued by injuries, Steven Matz has missed a lot of time during his short MLB career, but when healthy, he can be a very good pitcher. In his last outing, Matz didn't give up an earned run in five innings, while striking out eight batters against a very potent Washington Nationals lineup. Not only is he a good streaming options this weekend, but he should be owned in 12 team leagues...at least until he inevitably goes on the DL again.

If you don't want to stream Miles Mikolas for his pitching abilities or even the matchup, at least do it for his glorious hair and stache.

There aren't as many good options on Saturday, but I think Miles Mikolas can get things done against a struggling Cincinnati team. The Reds are 29th (out of 30) in runs scored, so if we don't necessarily love the pitcher, let's target the matchup. He has a really good 12-6 curve ball and I think we are yet to see the best of Miles Mikolas. Hopefully we see it in Cincinnati this weekend.

My lock of the weekend goes to Joey Lucchesi of the San Diego Padres. He has been an unexpected surprise this season as he has pitched to a 1.72 ERA and 1.02 WHIP in his first three games against very good offensive clubs in Colorado (twice) and the Brewers. His last outing in the uber-hitter friendly Coors field, Lucchesi didn't give up a run in six innings while striking out eight and only walking one. Not only should he be your first option to stream on Sunday, but he should be rostered in all formats.