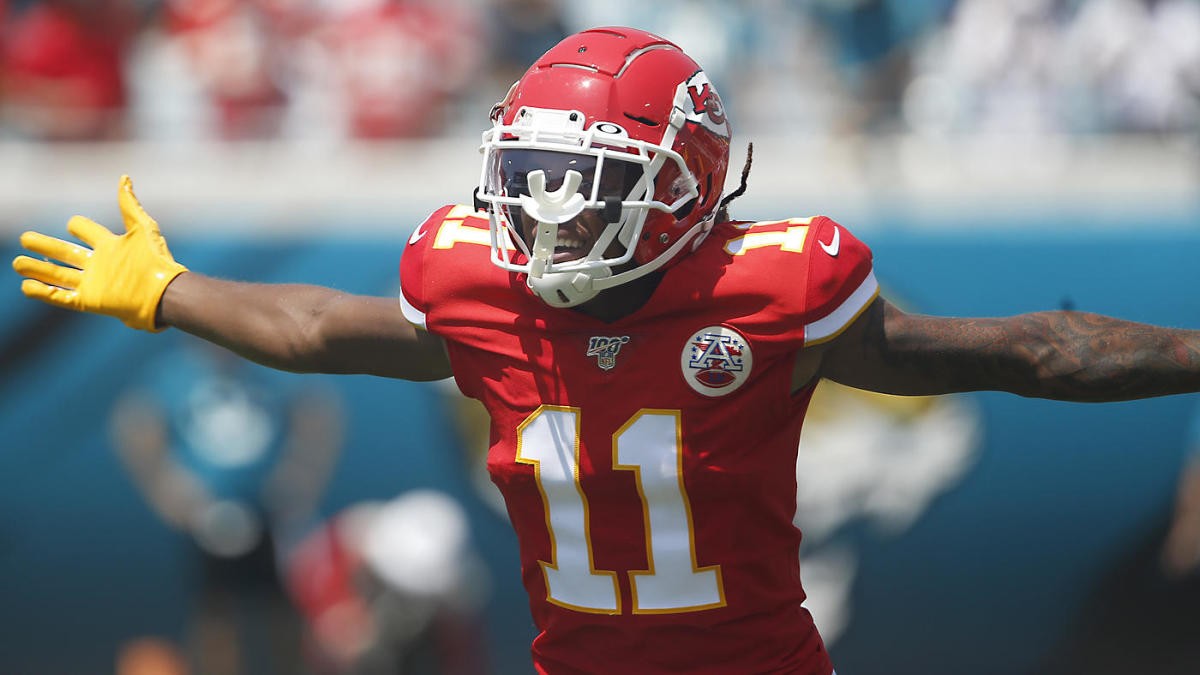 Week 2 Waiver Wire adds are here. Lot of injury dependent claims so make sure to follow the Fighting Chance Fantasy crew on twitter for updates: @fightingchance; @fantasygeek37; @thekaceykasem; @ktompkinsii; @polkapat; and I am @garyhaddow1.

There isn’t much to say besides Robinson will be the number 1 waiver add this week. The Chiefs offense is must own for every player getting more than a couple targets. Robinson exploded this past week, and hopefully can continue to do this while Tyreek Hill is out, and maybe beyond.

Hardman as the rookie has to be behind Robinson, but please remember that he had a 72 yard touchdown called back on a non-relevant holding penalty.  The Chiefs offense is must own for every player getting more than a couple targets. Robinson exploded this past week, and hopefully can continue to do this while Tyreek Hill is out, and maybe beyond.

Mason Rudolph is now the starting QB, and who was his number 1 WR any time he was on the field for preseason: James Washington. This is looking to be a classic case of backup QB1 matching perfectly with backup WR1. Obviously JuJu is still there, but given Donte Moncrief crushing owner’s souls, Washington may slide right in.

I think Diontae should be added as a speculative wait and see for week 3. Do we know who Mason will through to? I think it’s Juju, Washington, and Vance. But maybe Diontae takes over for Moncrief.

Agholor was the defacto WR1 after Alshon and Djax left the game due to injuries. I haven’t heard about the severity of the injuries, but should both or one of them be out, then Agholor becomes a very important add. Whoever is the primary WR in week 3 will get Darius Slay who is pretty close to a shutdown corner.

Mack Hollins, PHI – Confidence 6 if Alshon Jeffrey AND Desean Jackson are inactive. Confidence 3 if Alshon OR Desean is inactive. Not worth picking up if both are active.

Mack is a poor man’s Agholor. May not be in your primary waiver claims, but he is someone to monitor as the week progresses. If both Alshon and Djax are out, then he will be the WR2 on the team.

Devin Smith, DAL - Confidencec 4-5 while Michael Gallup is out (3-4 weeks)

This add is solely based on my 2019 belief that Dak and the Cowboys are a team I want to have a piece of. Gallup is out with a minor knee surgery fro 3-4 weeks. Devin is going to be a week 3 wait and see, but after scoring a 51 yard touchdown I am at least intrigued enough to add and see if he has developed a Dak connection. Even if he doesn't add much to your fantasy squad, this is great news for Dak to get an additional weapon.

Just check: Terry Mclaurin, WAS – a must add if available. In any form of keeper league, he may be the number 1 add if still available, but probably not, which slides him behind the two KC WR.

Mason Rudolph, PIT – Confidence 7 as a streaming QB and QB2 in Superflex

I think I am higher on Mason that a lot of others as he has had time in this system to figure out what Tomlin wants to do. He still has good weapons and most importantly a good offensive line. I’m definitely going after him to replace Roeth AND/OR Brees. I like him more than Teddy, but that is solely because I think he has better receiving options from top to bottom.

Just announced as the starter today I am cautiously optimistic that Daniel Jones can become a solid QB2.  While his selection at 6 overall was a joke, his preseason was no joke! His wide receivers leave much to be desired, but he does have Saquon Barkley, Evan Engram, and soon to be Sterling Shepard with Golden Tate. I don't expect him to be the next Tom Brady off of the bench, but I like him more than short term starter Teddy Bridgewater.

Teddy Bridgewater, NO – Confidence 5-6 as a streaming QB2 or a QB2/3 in Superflex

I’m not sure if I am making claims on Teddy as I think that offense really is tailored to Drew Brees. Sean Payton is very smart, and maybe I shouldn’t doubt him, but in an offense that funnels through Michael Thomas and Alvin Kamara, I am nervous that it’ll be pretty simple to create a game plan that disrupts Teddy’s read progression.

Case Keenum, WAS – Confidence 5 as a streaming QB2 or a QB2/3 in Superflex

If Keenum is still available he has shown a strong connection with Terry Mclaurin which is enough to have him be a streamer in the right matchup. I am finding it hard to start him in my Superflex leagues, but he makes me feel very comfortable as my QB3 or even QB4.

Just check: Is Jimmy Garoppolo available? If so, he is the top QB add.

It appears that James Conner has escaped major injury, however, this is the reality check that Samuels needs to be owned in all leagues this week. And moving forward he should be owned in all but the shallow leagues. If he is required to be the RB1 on the team he has a proven track record that he can show up and ball out.

Snell is purely a speculative add in case Conner’s injury is worse than being reported. Similar to Mack Hollins, I am probably waiting for more news to make a claim. But, if you have deeper rosters and have a spot, he will probably be a 1 week wait and see.

Similar to Snell it sounds like Dwill and Shady aren’t too injured, but this is a strong reminder that Williams has not had a heavy workload and that Shady is 31 years old. Thompson is still one of the best flyers available on the waiver wire, so if you’re prone to handcuffs then he should be on your bench.

Obligatory listing the RB3 in SF because Shanahan can make 1-3 running backs viable in a given week. This was a total blow out of Cincy, but Wilson had 2 touchdowns. Should there be an injury then Wilson ultimately is next man up.

Just check: Is Raheem Mostert available? If so, he is a top waiver wire add.

David Njoku landed on his neck. I don’t know if he will play week 3, but the amount of goose eggs being laid across the tight end landscape makes a tight end with a competent QB worthy of a second look. I don’t think Harris vaults in TE1 value even if Njoku is out rest of season (doubt he is), but he is a serviceable TE2.

Just check: is Darren Waller available? If so, he is pretty much a TE1 rest of season.