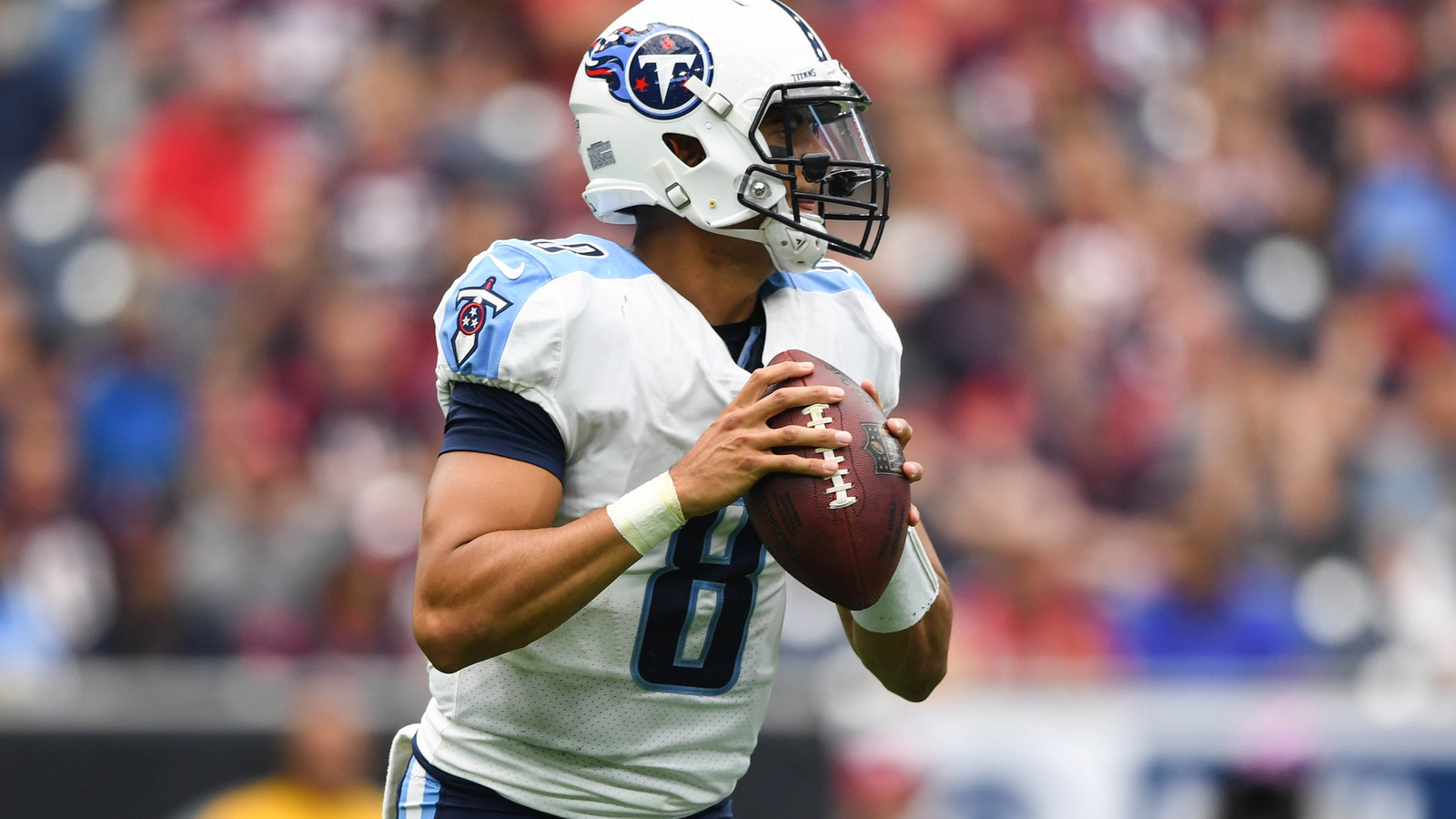 Fantasy Football can be a very frustrating game. Just when you think you have it figured out it reminds you that you know nothing. Once again players that were left for dead are revived and players that were not on anyone’s radars became viable options.

Hopefully this article will help you sift through the garbage to find a few gems and allow you to find the players you need to help fill in for any coming bye weeks or injuries that were sustained.

Here are our waiver wire players heading into Week 5.

But first here is a list of players you should not drop….just yet….

LeSean McCoy (he is right on the edge, but his pedigree says no)
Larry Fitzgerald (have to wait out the injury)
Kenyon Drake (I know you want to, but hold off for now)
Demaryius Thomas
Keelan Cole
Nelson Agholor (might be on the other list next week)

Here are some players you can drop.

Marcus Mariota, QB Tennessee – Mariota is still not 100% but he played very well in Week 4 against a tough Philly defense. He passed for 344 yards and 2 touchdowns, while adding 46 yards and another touchdown on the ground. He doesn’t have the easiest schedule moving forward, so make sure to temper your expectations.

Mitch Trubisky, QB Chicago – We finally saw some excitement from this Chicago offense that was super-hyped during the preseason. Trubisky had the best game from a Bears’ QB in the Super Bowl era, throwing for 354 yards and 6 touchdowns, with no interceptions. He also added another 53 yards on the ground. Of course, this was against a TB defense that was starting 2 rookie defensive backs and a third-string safety. He has a bye in Week 5 then faces a tough slate of defenses moving forward.

Jameis Winston, QB Tampa Bay – Winston returned to the starting QB position in Tampa, after Fitzpatrick struggled in the first half against a very tough Chicago defense. Unfortunately, Winston struggled too. While he did complete 16 of 20 throws for 145 yards and a touchdown, he also threw 2 interceptions. He has a bye in Week 5, but then he faces three very generous defenses, the Falcons, Browns and Bengals who have allowed an average of 300 yards and over 2 touchdowns a game to opposing QBs.

C.J. Beathard, QB San Francisco – Beathard played a strong game in his first start of the season, just barely losing to the Chargers. He threw for 298 yards and 2 touchdowns, but also threw 2 interceptions. He has a very tough road ahead, facing some very tough defenses, so don’t rush out to pick him up unless you play in a 2QB or superflex leagues and no one else is available.

Nick Chubb, RB Cleveland – Chubb only touched the ball 3 times in Week 4, but he turned those touches into 105 yards and 2 touchdowns. Already Hue Jackson has come out and said that they have to get the ball in his hands more. Of course, because Jackson said that it must be true, we know Hue would never lead us on. With Carlos Hyde playing well, it may not be as much as we would like, especially when we start adding the next player into the mix as well.

Duke Johnson, RB Cleveland – Johnson has been a disappointment so far this season, but like most of the Browns, he got a lift with the start of Baker Mayfield. While he didn’t have the type of game that Chubb had, he was still much more involved than he was in the first 3 games. He only rushed 2 times for 11 yards, but he also added 2 2-point conversions and caught 4 passes for 45 yards. It was enough for him to get into double digit fantasy points for the first time this season.

Tarik Cohen, RB Chicago – Of course just when everyone was losing faith in this offense, myself included, they come out and have the game of their lives. He only rushed 13 times for 53 yards but added 7 receptions for 121 yards and a touchdown on 8 targets. Of course, they weren’t playing a powerhouse defense, but it was good to see some life from this group. Cohen should see some increased looks going forward and if he is available in your league grab him now.

Mike Davis, RB Seattle – With Chris Carson a late scratch in Week 4 it was Davis that stepped up and not rookie Rashaad Penny. Davis out-snapped Penny 47 to 16. He rushed 21 times for 101 yards and 2 touchdowns and added 4 receptions for 23 yards. Head Coach said those words that fantasy footballers hate when he said that Davis would now become part of the Seattle RB committee moving forward, screwing us all just a little bit more. It will be anybody’s guess moving forward as to what the percentage of snap counts will be for each of these RBs.

Robert Turbin, RB Indianapolis – Turbin is coming off suspension and may get some playing time in the Colts’ poor rushing attack but based on past performance it will be hard to trust him. He did vulture 7 touchdowns in 2016 and that may be his role again this year, but he really doesn’t add much to any other categories. Let someone else in your league take the shot on him, he’s not worth much.

Ronald Jones, RB Tampa Bay – I can’t believe I am putting him here, but he was finally active in Week 4 after being a healthy scratch the first 3 weeks. With Peyton Barber doing absolutely nothing to start the season Jones may very well be given a shot to take this job. It is a longshot that he does anything with the chance, but I would be remiss not to include him here just based on the chance he should get.

Taylor Gabriel, WR Chicago – As you can see there are a few Chicago players on the list this week as this offense finally came alive, but Gabriel might have been the biggest surprise. Gabriel caught all 7 of his targets for 104 yards and 2 touchdowns. He even added 10 rushing yards. He has converted 22 of 29 targets on the year, but this is the first week he had more than 35 receiving yards.

Jordy Nelson, WR Oakland – Nelson is coming off back-to-back solid fantasy games, so maybe it’s time to believe again. After 6 catches, 173 yards and a touchdown on 8 targets in Week 3, he again saw 8 targets in Week 4 and converted them to 5 catches for 48 yards and a touchdown, plus a 2-pt conversion. As Carr continues to gain trust in Nelson, I expect Nelson to have more weeks like this.

Keke Coutee, WR Houston – Coutee is a rookie that this team has been high on, but he had been dealing with a hamstring injury that took him a while to shake. He finally saw his first action in Week 4 and was targeted a whopping 15 times, catching 11 of them for 109 yards. Will Fuller injured his hamstring in this game which could lead to increased playing time for Coutee.

Chester Rogers, WR Indianapolis – The loss of starter TY Hilton to a hamstring injury led to increased opportunities for Rogers and others in this offense. Rogers caught 8 receptions for 85 yards and added a 2-point reception. This week they face the Patriots who are allowing under 240 passing yards a game but have allowed an average of 2 passing TDs a game. It will be hard to figure out which of the Indy receivers who steps up with it looking like Hilton will be out on Thursday night.

Zach Pascal, WR Indianapolis – It might very well be Pascal, who after receiving 3 targets in the first 3 games, saw 10 targets against the Texans. He caught 6 of them for 56 yards and a touchdown. It will be very hard to count on him moving forward, so he should only be picked up in deeper leagues.

Taywan Taylor, WR Tennessee – With the sudden release of Rishard Matthews, Taylor steps into a bigger role. He was targeted 9 times in this game, catching 7 of them for 77 yards. A solid game in PPR leagues but he has a tough schedule ahead so don’t get your hopes too high on many repeats of this.

Cameron Brate, TE Tampa Bay – Almost as if this were scripted in the same game that Winston retakes the starting job the Bucs also lose O.J. Howard for the next 2-4 weeks with a MCL sprain, allowing Winston to work with Brate exclusively during that time. Brate has a career year in 2017 with Winston under center and the two certainly have a rapport that should increase Brate’s production. He has a bye in Week 5, but he does get a soft Atlanta defense in Week 6. Hard to say what he does when Howard comes back, so don’t spend much to get him.

Vance McDonald, TE Pittsburgh – McDonald had a decent game by TE standards, catching 5 passes for 62 yards. This after his 112-yard, 1 touchdown performance in Week 3. It’s hard to say if he will continue to be the main TE with Jesse James looming in the background, so moderate your outlook on his value moving forward.

Tyler Kroft, TE Cincinnati – After a gruesome injury to Tyler Eifert, leaving him done for the year and possibly more, it will come down to Kroft and C.J. Uzumah to pick up the pieces. When this happened last year Kroft was the main beneficiary, catching 42 passes for 402 yards to go along with 7 touchdowns.

Jeff Heuerman, TE Denver – With Jake Butt being lost for the season Heuerman stepped in and caught 4 passes for 47 yards on 7 targets. Keenum definitely likes to throw to his TE and Heuerman has a pretty decent floor and if he gets any red zone looks at all his value could jump.

That’s it for this week folks. Good luck with your waiver wire runs and you teams in Week 4. You can always find me on Twitter at @Fantasytaz.