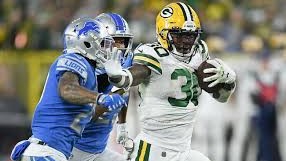 If he is still available then I hope you can get him if you’re hurting at QB. He looked awesome, but he does have a tough 2 weeks coming up (NE, JAX). After that he has an epic schedule to get you to the playoffs.

This week’s Arizona Cardinal’s Lottery winner is Daniel Jones and the New York Giants. He should ball out against them with his new found weapons of Golden Tate, Darius Slayton, and hopefully returning Evan Engram and maybe… Saquon Barkley. If he is available, I am happily spot starting him for one week.

This week Minshew Mania heads to Cincinatti. If you need a spot start you can do much worse than him. Even after a down week against New Orleans I still have faith that Minshew rights the ship, and so will DJ Chark.

Check to see if available: Josh Allen – Has an amazing schedule starting this week. If he is available and you need a QB he is the number 1 waiver add.

The GB backfield is producing two viable running backs each week. While they do limit each other’s upside, Williams is still a solid flex. Given Aaron Jones hasn’t played a full 16 game season before Williams is a solid flex plus high upside stash down the stretch. He is my number 1 waiver add of the week assuming you aren’t starving for QB.

Alvin Kamara is banged up, and so we should see a healthy dose of Latavius Murray. I’m not sure how successful he will be against the Chicago Bears, but this is your mid season opportunity over opponent pick up. He has been good to great in the past, and if this is his backfield for a week he should be a low end RB2.

This was not the best week for RoJo, but I still think that he should be rostered and started in the right matchups.  He is on a bye, so do what you need to do to keep or cut him.

Snell ran pretty well against the Chargers, but maybe that isn’t saying much anymore. He is a strong handcuff, and if he didn’t have this past weekend then he would be relegated to the below group. He is on a Bye though.

Apparently, Aaron Rodgers specifically wanted Lazard on the field which has to mean something. Given the terrible WR play from the Packers sans Davante Adams, Lazard is definitely worth a shot to see what happens in this passing attack. MVS and Allison haven’t impressed much given their opportunity, but you know who has… Allen Lazard.

In PPR leagues Crowder is a high floor WR3/flex. I am happy starting him given the bye week situation. I am not too high on his touchdown potential, but he sees a lot of targets and finds a way to be open frequently.

Tate had some amazing catches this past week and until AJ Green comes back then Tate is necessary part of a team that should be passing A LOT.  He might not be a league winner, but given bye weeks and injuries I have started him and you should feel you can too. This week may be tough against Jacksonville, but sometimes we have to do what we have to do.

I hope you picked up Robby Anderson!!!

Despite a down week I am still high on the chances that Everett continues to break out. I am going to chalk this up to Goff having an amazingly terrible game against an amazing 49ers defense. Going up against the Falcons Everett should find many more pass catching lanes.

Herndon missed his big chance to return in a rout of the Dallas Cowboys. He has been activated to the roster despite suffering a hamstring injury prior to the Dallas game. Sam  Darnold looked good, and this offense could be much better than people expect given their upcoming schedule. Temper expectations against the Pats and Jags, but I think Darnold looks for him often so he has a solid floor in TE premium leagues.