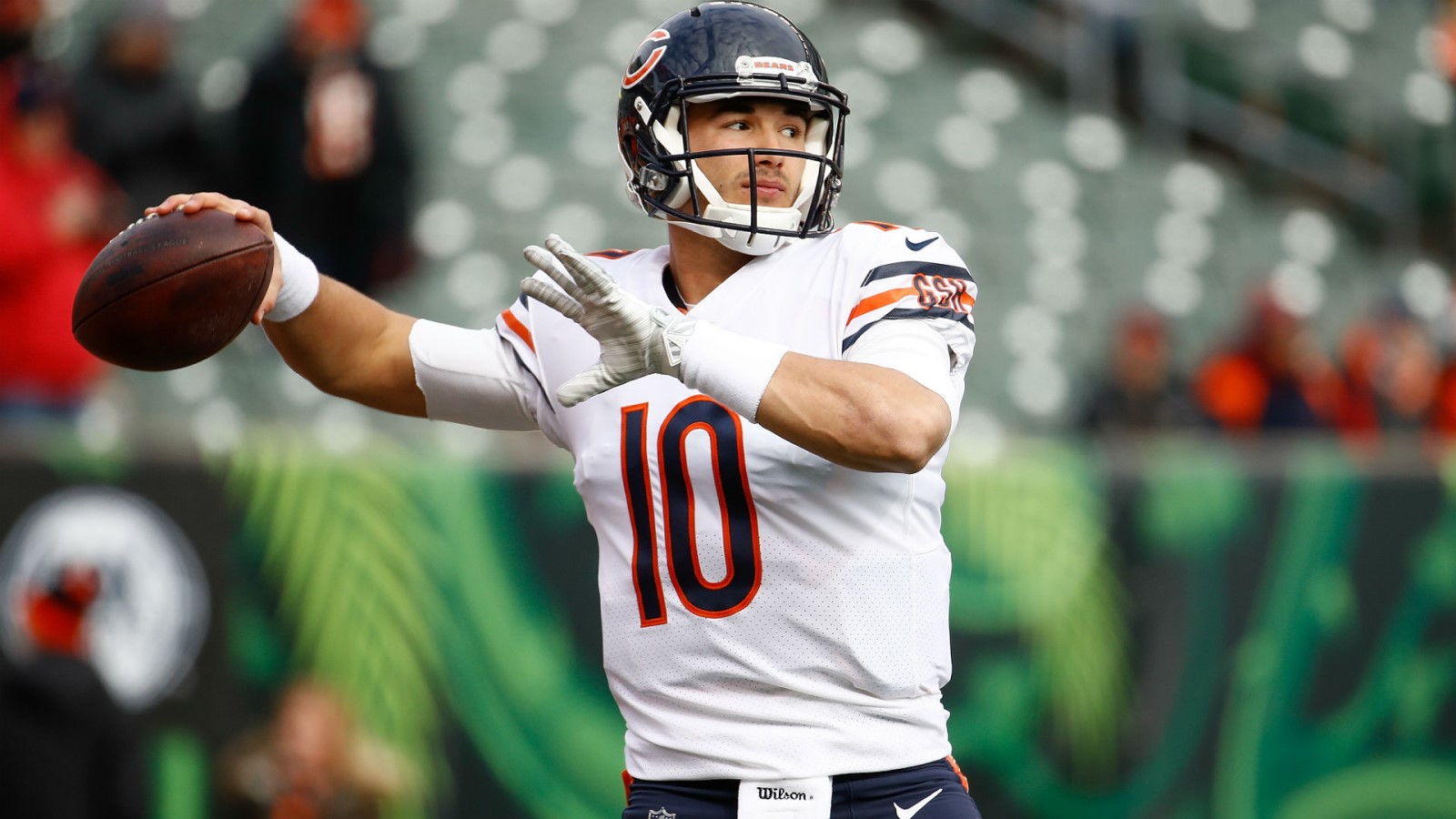 As we head into Week 7 and the first week with more than 2 teams on bye, it is definitely getting harder to field a strong fantasy lineup. With Green Bay, Oakland, Pittsburgh and Seattle on bye the options are limited. This week you are without Aaron Rodgers, Ben Roethlisberger and Russell Wilson which will definitely send people to the waiver wire just for QBs alone.

Before we get to the Waiver Wire for Week 7 here are some crazy stats I found on Twitter.

Here are a couple that go together.

First from @LordReebs: Jarvis Landry has caught 11-of-29 targets for 114 yards and 1 TD in Baker Mayfield's three starts. @PFF has just 13 of those targets as catchable. Good news is that this week he's in a prime get-right spot against Tampa Bay this week.

Then from @MikeClayNFL: Baker Mayfield has a 4:5 TD:INT mark and an ugly 56% completion %. Deeper look: 9.6 avg. depth of throw is on the high side and 8.5% of throws have been dropped (more than double league average).

Here are some players I am not ready to drop yet:


Now let’s head to players you should be looking to pick up.

Mitch Trubisky, Chicago – Trubisky followed up his massive 6 touchdown performance in Week 4 with another solid effort in Week 6. This week against Miami he threw for 316 yards, 3 touchdowns and 1 interception. Plus, in the last 2 games he has added another 100 combined rushing yards. Miami’s defense had only allowed 6 total QB touchdowns in its first 5 games. This offense seems to finally be clicking and Trubisky is putting himself to be a QB1 going forward.

C.J. Beathard, San Francisco – In his 2 weeks of starting Beathard has been a top 10 fantasy QB and hasn’t scored less than 20 points in any game. He almost pulled out a big upset against Green Bay, but ultimately a late interception put the ball back in Aaron Rodgers hands with time to win….and he did. Beathard is averaging 300 yards and 2 touchdowns a game. Unfortunately, he has also thrown for 5 interceptions.

Derek Anderson, Buffalo – Josh Allen has already been ruled out for Week 7 and is in danger of missing more weeks. Buffalo just signed Anderson last week, but already there are reports that Sean McDermott might lose the locker room if Nate Peterman gets another start. Only in deeper leagues, 2QB, Superflex or just from sheer desperation is Anderson worth a pickup.

Jalen Richard, Oakland – Richard has quietly hit double digit scoring in 4 of his 6 games, almost exclusively through the air. So far on the season he has 31 receptions for 253 yards, which is only 3 receptions behind Christian McCaffrey. When Oakland is playing from behind, which seems likely in most weeks, Richard is a great flex play.

Peyton Barber, Tampa Bay – Just when everyone was thinking that Ronald Jones was a thing again, Barber got all the work and finally had a good game. He rushed 13 times for 89 yards, a healthy 6.3 yards-per-carry (YPC), while adding 4 catches for 24 yards and a touchdown. Of course, it was against the injury riddled Atlanta defense, so hard to think he can do this again since the best he did in the first 4 games was 6.9 PPR fantasy points. If he is out there though he may be worth the add.

Marlon Mack, Indianapolis – Mack came back after missing time with an injury and instantly saw just under 60% of the running back touches and averaged over 7 YPC. Unfortunately, he is not used much in the passing game and is still definitely involved in a committee with Nyheim Hines, Robert Turbin and Jordan Wilkins in the mix. He will be very touchdown dependent and hard to trust most weeks.

Jamaal Charles, Jacksonville – Days after being signed Charles played 35% of the snaps and accounted for 28% of team rushing attempts in week 6. He also played a role in the passing game with 8% of the targets. There is a slight chance Fournette is back in Week 7, but Fournette is quickly becoming a back that is hard to trust to stay healthy. If you have bench space Charles might be worth a pick up.

Ito Smith, Atlanta – Smith has scored in 3 straight games, but that’s about all he has done. He actually had one more carry than Tevin Coleman with 11, but only averaged 2.0 YPC. He also had 2 receptions for -1 yards. It looks like Devonta Freeman will remain out in Week 7, so Smith still has a little value, but if he doesn’t hit that TD each week he is basically useless.

Frank Gore, Miami – Gore rushed for 101 yards against a very tough Chicago defense, he was the first RB all season to do so. It looks as if Gore has replaced Kenyon Drake as the early down back, but Drake still out-snapped him 49 to 30. Drake seems to have fallen into the third down back role. He will be hard to trust on a weekly basis but might help as we get deep into byes.

Willie Snead, Baltimore – Snead has really been a solid WR4 so far, but with bye weeks upon us he needs to be owned in all 12 team leagues. He has hit double digit scores in 5 of 6 games and has some nice matchups ahead. If he is still on the wire in your league, go get him now. He is still behind Crabtree and Brown in targets, but is still getting enough to be a solid WR 3 or Flex play during byes.

Christian Kirk, Arizona – Kirk is behind Fitzgerald and tied with Ricky Seals-Jones in targets, but he still leads the team in yards (311), yards-per-target (10.03) and reception rate (80.6 %). It is obvious that Fitzgerald isn’t right and Josh Rosen favors Kirk. He has hit double digit scores in 3 of the last 4 weeks and is another solid pickup and in the last 4 weeks he has been on the WR2/3 cut. Get him now.

Chester Rogers, Indianapolis – With Hilton still out and now the possibility of Ryan Grant being out too, Rogers moves to the head of the WR group. In the last 3 games with Hilton out Rogers has been a solid WR2 and has averaged over 15 PPR fantasy points a game. He has also seen over 10 targets a game over that stretch.

Jermaine Kearse, New York Jets – Quincy Enunwa is now dealing with a high ankle sprain and should miss multiple weeks which makes Kearse a fine pickup. Kearse has the best season of his career in 2017 operating as the Let’s slot receiver and now he is back as long as Enunwa remains out. In Week 6 he caught 9 of 10 targets for 94 yards. He is a solid pickup for the next 3-4 weeks.

David Moore, Seattle – Moore is definitely getting some attention now after catching 3 TDs in the last 2 weeks, but the question is can it continue? It’s hard to have confidence when a player is seeing only 3-4 targets a game, but he has been targeted twice in the red zone the last 2 weeks. I would only stash him in the larger leagues, but in 12 team leagues I would wait one more week.

Albert Wilson, Miami – Wilson is now leading the Dolphins in targets, receiving yards and fantasy points, including QB Ryan Tannehill. The bad part is that he had his best game of the season, heck of his career, at the hands of the backup QB. He will have some decent weeks going forward, but he will have more down weeks than up.

Damion Ratley, Cleveland – People around Cleveland have been whispering about Ratley and in Week 5 we finally got to see him in action. He was still 4th in targets but he had the best fantasy week of their WRs. Calloway continues to drop passes and be a disappointment and Ratley, as long as Rashard Higgins remains out could start to see a bigger role.

Cole Beasley, Dallas – You have to go back to Week 9 in 2015 for the last time Beasley had over 100+ yards receiving and 2 touchdowns, actually the was the only other time he has done it, so cool your jets. He has never been a consistent WR so I don’t expect him to start now. In 6 ½ seasons he has only had 2 instances of having 2 games in a row over 10 fantasy points. Let someone else pay for him.

C.J. Uzomah, Cincinnati – Uzomah is in a solid position right now. He has a QB that loves to throw to TEs and both Eifert and Kroft are out of the picture. He saw a solid 7 targets in Week 6 with 6 receptions for 54 yards. He gets KC and TB in 2 of the next 3 games and both defenses are in the bottom 5 against TEs.

Ricky Seals-Jones, Arizona – The preseason hype for RSJ was huge, but it has not come through. This is only the second game that he put up double points and the other was in Week 3 when his only catch was a 35-yard touchdown. In Week 6 against Minnesota he caught 5 passes on 6 targets for 69 yards, but in Week 5 he also had 6 targets and didn’t catch a single one. He may have a few more good weeks, but he will be very hard to count on.

You can always find me on Twitter at @Fantasytaz.