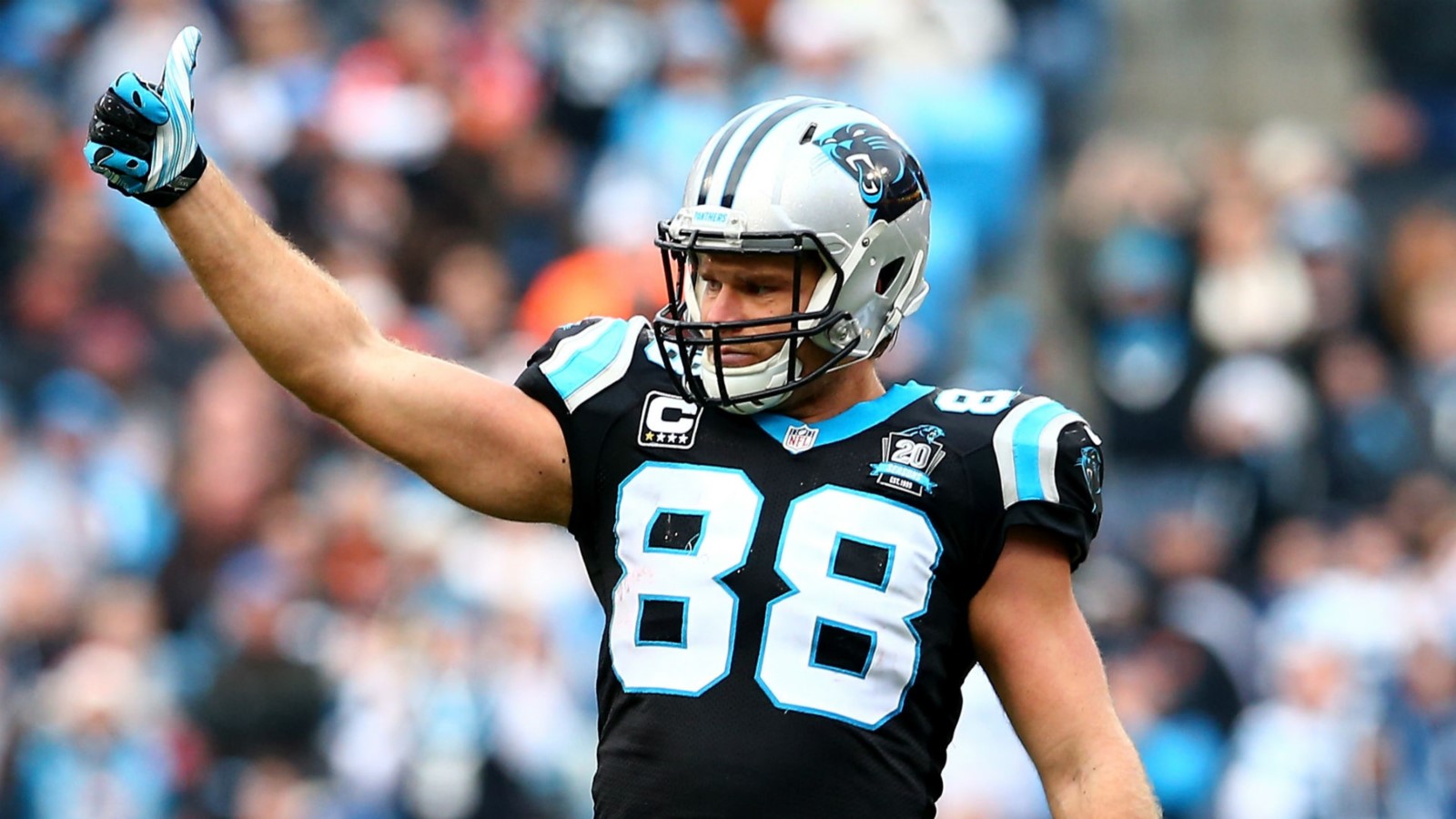 Where To Go After Gronkowski, Kelce and Ertz

Everyone who knows me knows that I love to draft Rob Gronkowski at TE whenever I can. I have had him on many of my teams every season since he was drafted. I feel strong enough as a drafter to know that I can make up for going TE early, but a lot of drafters don’t agree with me and I can understand that too.

Outside of Gronkowski, Travis Kelce and Zach Ertz seem to be the Big 3 at TE if you want to draft one early. But if you don’t like to draft TE early, or miss out on the opportunity to draft one of them, which way do you attack drafting a TE?

That was the point of yesterday’s Twitter Question of the day: If you miss out on the big three TEs (Gronkowski, Kelce & Ertz) how long do you wait for TE and who do you target?

@TheSharkWins - Kyle Rudolph. Only one team (Chiefs) targeted the TE position more than the Eagles last season. John DeFilippo also likes the TE in the red zone. In 2015 with the Browns, only 3 players saw more red zone targets than DeFilippo's TE, Gary Barnidge.

@romens99 - If you don’t get the top three, wait until the 8th or 9th round or later best bet is playing the matchups so I would grab 2 TE and switch between them maybe Kyle Rudolph or Jimmy Graham and then a flyer on Tyler Eifert late.

Brian Moore – Delanie Walker. He's the always healthy next choice. Titans young WRs will force Mariota to rely on him at times. 6th TE overall ballpark but depends on league.

@FFStompy - I really like waiting for George Kittle. Lately I have also been stacking Eifert and Kroft. Eifert, when healthy, is a top 5 TE. Kroft is a good insurance policy on Eifert and actually finished TE12 last season.

Perry Van Hook - I wouldn't target any one specific player but look to get one of a tier – Kyle Rudolph certainly a possibility but Delanie Walker who is going much later is always a top TE as well. This question will resolve itself as your RB and WR populate your team in the early going.

@SchaufDS - Next steps: — Greg Olsen in Round 6 — Rudolph/Walker in Round 9 (if either falls) — pair of dudes anywhere from Round 10 on.

@RekedFantasy - Depends on the value of Evan Engram/Kyle Rudolph. If they slip into the sixth/seventh range I'm happy with that. I guess that applies to both dyno and redraft.

@TheyWereKones - One of the last guys in that second tier – Kyle Rudolph or Jack Doyle. The room sort of dictates when.

Ken Zalis - If I can get Evan Engram in the 6th I go there...otherwise I am happy with Jake Butt late and playing the waiver wire game.

Evan Tarracciano - Happy to get Evan Engram wherever he is.

@CaptainKohana - I have two approaches: 1) See if a high upside next tier guy like Jordan Reed or Trey Burton falls to a good value, nab him if so 2) If no good mid-round value, wait and pair a value rookie starter (Gesicki/Hurst) with a steady undervalued vet like Ben Watson.

@chris_labenz - Targeting George Kittle in SF and Cameron Brate in TB I think.

@Sports_Junkie_1 – Jack Doyle early as in the 8th.

Tony Cincotta - Mike Gesicki, the Dolphins top two WR's will play a combined 10 games. This kid was drafted to catch the ball, he can’t block. They may play from behind as well. Don’t thank me for providing fantasy gold. Thank Jesus, he uses me as a vessel for fantasy prowess.

Brad Ellsworth - Tough call... after the big 3, it's a bit of a crapshoot. Jimmy Graham, Greg Olsen, Evan Engram and Kyle Rudolph are all "next" and with similar ADP. I'm very interested in Graham’s upside with GB. Olsen is steady, but I might take him last of this bunch with Engram and Rudolph after Graham. Reed is interesting too. Njoku could be the bargain IF the Browns are on the right track, big IF though. Rookie TEs, I'd take one late.

@ucswais - Almost indefinitely. The “ok TE1” tier is so large and the number of actual difference making TEs is 2 or 3 that TE is almost QB for me now. I have my favorites but it really depends on who from the tier falls in each draft.

@wmramsey – Jordan Reed in redraft, then when he gets hurt I will try to stream. TE feels like a big crapshoot this year.

@Grudecks – Trey Burton.... deep sleeper is Vance McDonald from Pitt. Did well once healthy and Ben loves him ... prob more of a streamer.

Mark Spafford - All depends when the run on 2nd tier guys go. If I'm picking late I'll take Jimmy Graham on the turn. But I'm also in love with the potential of Kyle Rudolph. OC DeFilippo's offenses have always been TE friendly// Gary Barnage in 2015 when DeFilippo was there. Couple that with Kirk Cousins’ love to target the TE.

@mitchzimmer2018 - I’ve been lucky enough to get Delanie Walker or Kyle Rudolph at round 7,8 and even 9 value in best ball thus far.

@egGoodSports – I’ve seen some good answers on this thread so far. Doyle would be nice, Rudolph is a good answer. But folks... we are missing who i think is going to be a definite powerhouse this year, playing in a POTENT offense w the best qb in the game.... Jimmy Graham is going off this year.

@ConsultFantasy - Unless one of the guys in the TE3-8 range really slip past their general draft position, I’ve been targeting Trey Burton and Jordan Reed in round 7-8, or waiting until much later and targeting Ben Watson and Vance McDonald, both of whom I think have TE1 potential.

Roger Leandro - I'd wait on a TE. If I can get Jimmy Graham in the 5th or 6th rd. I'd get him but there is 1 guy out there that I feel will have a breakout season with his new team and with the quarterback coming back. Keep your eyes on Eric Ebron who is now in Indianapolis with Andrew luck throwing him the football that could be probably the sleeper tight end of this year's draft.

Dustin Asher - Trey Burton, or David Njoku both are poised to have breakout seasons especially Njoku with Tyrod Taylor starting that kid made Charles Clay a TE1 last year before the injury.

@JimCovFootball - I've been targeting either George Kittle in the 9th and/or Vance McDonald in the 11th/12th. I like McD more since Big Ben has always made great use of a talented rec TE. Plus McD has insane athletic ability.

@ricklee160 - Jimmy Graham or George Kittle. Reason for Graham is he has Aaron Rogers. And Kittle because he was Jimmy G’s go to target at the end of the year last year. And Kittle is The first fantasy relevant Iowa Hawkeye in a long time.

@nickdip83 - I think I would target Greg Olsen. I haven't done any mock drafts yet, but wherever he's going that's where I would take him.

@hothead_italian – I took Gronk in the second in a few @PlayDraft and didn’t like the way my teams turned out though...still messing with the idea...been grabbing Cameron Brate late and taking a shot on Austin Seferian-Jenkins.

@dalton_kates - I’m waiting for Jordan Reed or Delanie Walker. If I miss on both of those I’ll just tank the position.

@_JohnDuckworth_ - There is no right answer. Norv likes his TEs, how far does Greg Olsen slide? What about Jimmy Graham. I like Trey Burton but he's no value anymore. Delanie Walker can be a value, Kyle Rudolph, Ben Watson, Charles Clay and even Mike Gesicki. Just depends on where the draft takes me.

@mrmeseeksff - I’ve usually been a wait on TE guy, but I really like the value this year in rounds 6-9. Been targeting Greg Olsen in rounds 6/7, Kyle Rudolph in rounds 7/8 or Trey Burton in rounds 8/9.

As you can see there are as many different answers as there are drafters. Okay maybe not that much, but certainly a lot of options are available if you miss the Big 3.

To start let’s take a look at the current ADP of these TEs:

As seen above there is a two round difference between the Big 3 and the next TE taken, Jimmy Graham. Graham starts the second tier that ends with Kyle Rudolph at 8.01. All of these are pretty safe choices except for maybe Reed, who while he has loads of talent, he has missed multiple games in each of his five years in the league.

After Reed there is a lot of upside potential with Burton, Kittle, Njoku, Howard and McDonald. Also in this range are vets like Doyle, Seferian-Jenkins, Eifert and Ebron. All of whom have had shots and fallen a little short of expectations.

For the first time since I have started playing Fantasy Football there is actually a TE handcuff I recommend; If you draft Jordan Reed then you have to try and grab Vernon Davis very late to cover Reed’s injury history. If you did this last year it was highly successful. Between the two of them they recorded top 12 TE numbers 12 times.

But I have to say the one that surprises me the most, and one I have been harping on all offseason in Ben Watson. I will keep beating my chest until people start to listen.

I know people are concerned with his age, 37, but it surely didn’t slow him down last year when he finished as the 11th best TE in PPR scoring on a Baltimore team that was having a hard time generating offense. They were 27th in total yards, 29th in passing yardage and 23rd in passing TDs.

In 2018 Watson is moving back to New Orleans where in 2015 he had his best season ever and finished 7th overall for TE fantasy scoring. He finished that season with 74 receptions, 825 yards and six touchdowns on 110 targets.

He has no real competition for targets at TE and while he may see a slight decrease from his 2015 numbers, I still fully expect him to finish as a Top-12 TE once again and the fact that he is being taken off the board as the 25th TE taken means that many of you are sleeping at the wheel.

If you miss out on the Big 3 and want to wait, there is no better target to wait for than Watson.