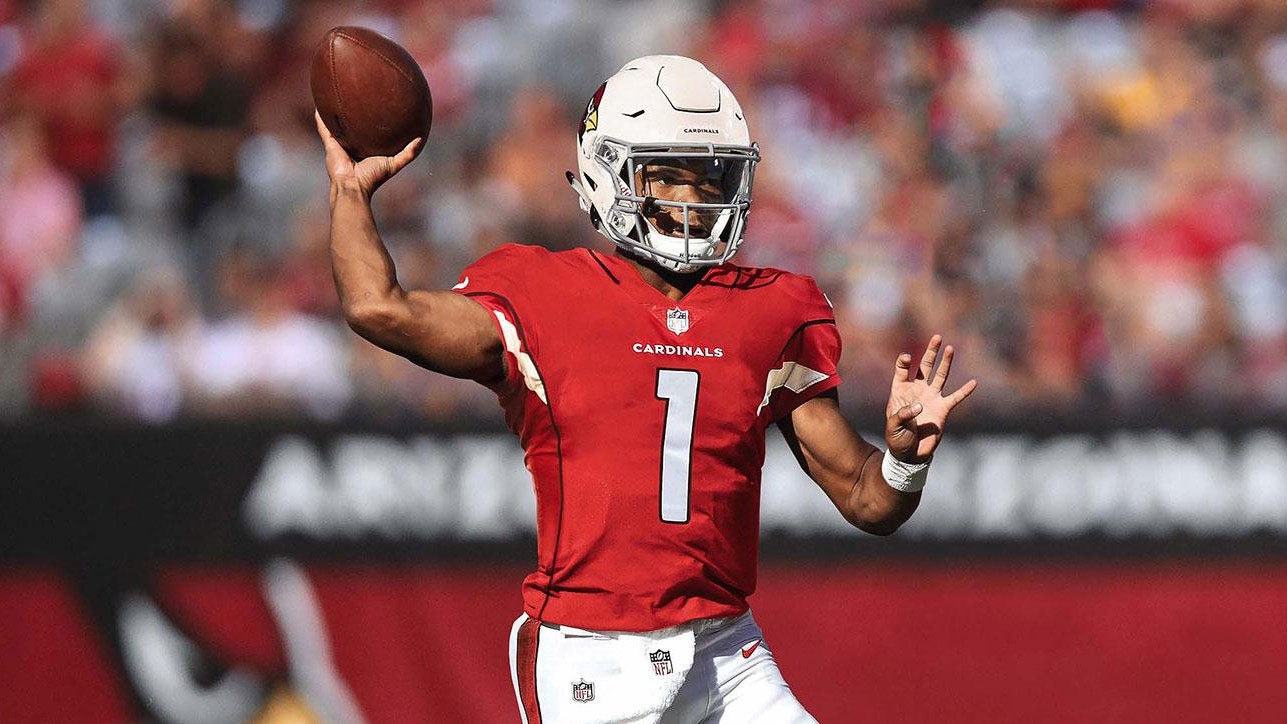 Why I Love Your NFL Team for Fantasy Football: The Arizona Cardinals

The Arizona Cardinals were by far the worst team in the NFL during the 2018 season. The Cards ranked dead last in total offense and ranked 26th defensively in terms of points allowed per game. While there are so many negatives to what the Cardinals were able to achieve last year, for 2019 they kept their core stable of wide receivers in Larry Fitzgerald and Christian Kirk, as well as have superstar David Johnson leading their running backs. With the hiring of collegiate offensive guru Kliff Kingsbury as the new Head Coach and rookie quarterback Kyler Murray leading an offensive heavy 2019 draft class, the Cardinals are poised to change the fate of this franchise and try take the NFL by storm.

Kliff Kingsbury was known as one of the best offensive minds in the college game during his tenure as the Head Coach of Texas Tech where he coached the now infamous Patrick Mahomes. Implementing an Air Raid style scheme that focuses on a fast-paced offense that utilizes play calling that is extremely pass heavy. Key to the Air Raid offense is having an intelligent quarterback who is able to make quick decisions at the line of scrimmage while calling audibles as he dissects what the defense is showing him.  Having a quarterback that can make quick real time adjustments pre- and post- snap allows the offense to stretch the defense out creating lanes for short to deep passes or running lanes. In addition, having a mobile quarterback that can audible from a pass play to a run play to a QB scramble further extends the defense.

With the first overall pick of the 2019 NFL Draft the Arizona Cardinals selected Kyler Murray, QB, Oklahoma. Murray is known for being a fantastic passer whether it is short or deep down the field and is even more well known for his ability to scramble as he rushed for over 1000 yards last year. He is an intelligent quarterback able to make quick decisions such that he threw for 4361 yards with 42 touchdowns and ran for 1001 yards and 12 more TDs. The combination of Kingsbury and Murray seems like a match made in heaven for fantasy football and maybe real-life NFL play. However, Kyler Murray was critiqued for his small stature at 5’10, 207 pounds as many have questioned how well he could hold up against NFL defenses. But many see Kyler as a better passer than last year’s number one pick, Baker Mayfield, with the upside to run like Cam Newton.

Murray gets to enter the NFL with the Hall of Fame hands of Larry Fitzgerald catching everything thrown at him, ascendant second year wide receiver Christian Kirk who spent a year with Kyler Murray (at Texas A&M prior to Murray switching to Oklahoma), and star running back David Johnson who is just as dangerous as a pass catcher as a pure runner. In addition to the veteran skill position players the Cardinals selected three receivers in the 2019 Draft.

With the 62nd pick of the draft the Cardinals selected Andy Isabella who is a product of the University of Massachusetts and should slide in as the speedy slot receiver to grow and develop with Kyler.  With a blazing 4.31 40 yard dash Isabella should fit perfectly into Kingsbury’s Air Raid system as the quick release throw over the middle. Then at the top of the 4th round Hakeem Butler was taken at the 103rd pick. Butler is a big bodied 6’6, 225 pound receiver from Iowa State with 4.48 speed and was deemed by many draftniks as one of the top wide receivers in the draft. His slide to the 4th round surprised a lot of analysts and with a crowded wide receiver group in front of him, Butler should be viewed as more of a project than an immediate producer for the team, and for fantasy purposes. With his large frame and ability to win contested catches by going up and catching them at a high point, he has the potential to develop into a successor for aging Larry Fitzgerald (though that successorship may be left to Kirk). And lastly, at pick 173 KeeSean Johnson was selected. He has slower speed at 4.6, but has okay size at 6’1, 201 lbs and was a high volume receiver at Fresno State. The importance of this pick is the further emphasis of the Cardinals to be building their offense for the future, starting with this year’s receiving class.

Last year the Cardinals were terrible in every aspect off the game, and especially when it came to their offensive line. Already heading into 2018 they had an offensive line that was ranked in the bottom half of the league. Then they were struck with injury after injury. All in all, by seasons end they had sent 6 offensive linemen to injured reserve. BUT, despite this terrible line play, David Johnson still finished as the RB9 in PPR scoring. This speaks volumes to the type of talent that David Johnson is. In 2016, DJ was the overall RB1 in fantasy, then in 2017 he broke his wrist early in the season and was out for the remainder of the year. His RB9 finish in 2018 consisted of 258-940-7 on the ground, and 50-446-3 in the air.

Currently, DJ is being drafted as the RB5, which is exactly where I would draft him. While some are saying he is being drafted at his ceiling, I would venture that his ceiling is overall RB1. He has publicly stated he wants to hit 1,000 yards rushing and 1,000 yards receiving. And if any offense has the potential to rebound and create the opportunity for a 1000/1000 running back, I’d put my money on the 2019 Arizona Cardinals. Even if the Las Vegas sportsbooks are setting the Cardinals line at 6 wins, that to me says they will be trailing, needing to throw the ball, and with a porous offensive line there will be plenty of dump offs to David Johnson. Last year the Cardinals ran a league low 56 plays per game, and DJ still had 308 touches! Now they want to be one of the fastest paced teams in the NFL so DJ should see 300-350 touches which will get him well on his way to a 1,000/1,000 season.

Additionally, for the wide receivers I see a ton of upside with a safe floor. Larry Fitzgerald has always been seen as the Cardinals’ top wide receiver since entering the league in 2004. As recently as 2017 Larry Fitzgerald was a beast with 109 catches for 1156 yards and six touchdowns. Even in a down 2018, with the worst offense in football, Larry Fitzgerald was still a top 30 wide receiver. And now in 2019 with a revamped offense and what should be a quarterback upgrade, Fitz is being drafted as the WR36 between Sterling Shepard and Geronimo Allison. While that is probably appropriate value for his draft position, his ceiling is much higher than both of those players given we have seen it from him recently and the possibility of Kyler relying heavily on his veteran receiver. Also, the WR36 is coming from today’s ADP on fantasyfootballcalculator.com, however, in many of my drafts I see Fitz falling much farther making him even more appealing.

Christian Kirk appears poised to make the biggest jump on the offense after he teased fantasy owners with his 43-590-3 rookie stat line. He had some epic highlights such as his 75 yard catch-and-run touchdown that have his arrow pointing up. He is currently the WR33 off the board, just before Larry Fitzgerald. That feels right to me as owners are unsure who to think will be the top dog and win over Kyler’s first read. I like Kirk in redraft as a high upside play that is part of a large wide receiver tier consisting of Dante Pettis, Tyler Boyd, Calvin Ridley, Mike Williams, and others. However, in Dynasty I love his value and have been targeting him everywhere I can. Developing and growing with a young 1st overall QB in a high volume Air Raid offense is the type of wide receiver I want to attach to my dynasty team for years to come.

I personally am not a fan of drafting rookie wide receivers in redraft leagues, the fact the Cardinals spent their 2nd, 4th, and 6th round picks on wide receivers bodes well for the future of this offense. With Andy Isabella’s speed, Hakeem Butler’s frame, and Keesean Johnson’s high volume capabilities, Kyler Murray will be surrounded by three more than capable pass catchers, one second year in Kirk, and DJ and Fitz who have some of the best hands at their positions.

If the offensive line can stay healthy and/or even be a top 20 line (not too much to ask), then we could be seeing an offensive explosion in the Desert and that is great for Kyler Murray’s fantasy stats. Already being drafted as QB9, Murray’s highs are built in to his draft capital. We have seen the likes of Cam Newton be a top five quarterback his rookie year primarily due to his rushing capabilities. If Kyler is able to have Cam or Lamar Jackson like rushing stats, but be a passer comparable to Baker Mayfield, a top 10 finish seems very likely. Obviously, there is downside with taking a rookie play caller as your QB1 with a rookie NFL Head Coach, but at a position as deep as quarterback it will be easy to find a back up later in drafts or on the waiver wire. Pairing Kyler with a Phillip Rivers later in drafts present a nice floor and ceiling combination.