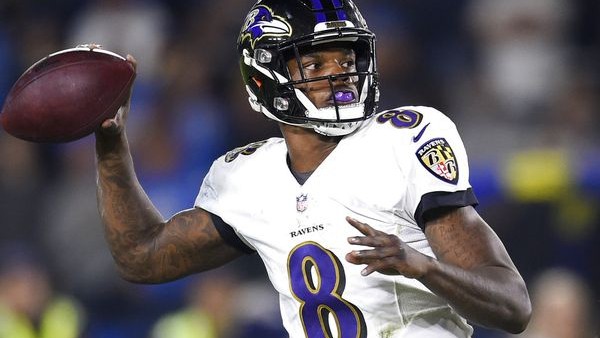 Why I Love Your NFL Team for Fantasy Football: The Baltimore Ravens

The 2018 Ravens season was a tale of two halves. They started the season with Joe Flacco who seemed pretty incompetent through nine games, and then halfway through the season Flacco was eventually benched for Heisman trophy winner Lamar Jackson. His electric playing style took quarterback rushes to a whole new level. Jackson’s shocked the NFL with his ability to create yards and first downs with his legs, while also shocking the NFL with errant throws that baffled viewers. On the fly John Harbaugh completely changed the offense to a ground and pound scheme led by Lamar Jackson’s legs and undrafted rookie running back Gus Edwards. The 2018 season ended with the Ravens as the second best rushing team in terms of yards per game and total rush attempts. Now, the 2019 season is trending up for the Ravens offense as they look to claim the #1 most potent rushing offense with the help of Mark Ingram who was signed in the offseason. The Ravens also added high draft capital wide receivers with Marquise “Hollywood” Brown and Miles Boykin in the 1st and 3rd rounds respectively, as they look to keep defenses on their heals by stretching the field and pounding the rock.

Based on their second half last year, the NFL knows what the Baltimore Ravens want to do in the 2019 season, they want to run the ball. During the final seven games of the season the Ravens rushed for 1607 yards (229.6 ypg) with the next closest team (Seattle) being 500 rushing yards less during the same span. Jackson himself ranked seventh in rushing yardage during the final seven games with 556 yards. It will be difficult to extrapolate what the rushing yardage and attempts will be for 2019 given the expectation that Jackson’s rushing attempts will decrease on a per game basis (17 attempts per game those final 7 games). But the Ravens made moves to expand the offense’s options.

Mark Ingram is a household name in fantasy and NFL communities because of the years he ran as the primary running back in a committee down in New Orleans. He always felt like a solid RB2 for fantasy purposes even if he rarely got the chance to be a bell cow back. John Harbaugh took notice, and despite the success of UDFA Gus Edwards (718 rushing yards in 11 games), the Ravens signed Ingram to a three year/$15.5 million dollar contract. Brought into be the primary running back as indicated by the $5M+ annual contract, Ingram will be the big bruising back who also offers good hands in the passing game. Should anything happen to Ingram, Gus Edwards will be ready to take back over as the between the tackles running back.

Then in the fourth round of the 2019 draft the Ravens selected Justice Hill, RB, Oklahoma State. A several time all-American, Hill is lightning to Ingram’s thunder, with his 4.4, 40 yard dash speed, and 5.5 yards per carry for multiple years in college. Hill’s biggest concern is his frame at just 5’10", 198 pounds. Hill, Edward, Ingram, and Jackson can be used interchangeably to keep defenses guessing which plays will be called as they all offer different skill sets, but can all get the difficult yards with big play abilities. Utilizing all three backs and Jackson’s legs will allow the Ravens to continue running defenses into the ground.

But the running game is not the only area to see a drastic overhaul for the Ravens. After selecting two tight ends in the first and third rounds of the 2018 draft, the Ravens selected two wide receivers with the same first and third rounds of the 2019 draft. With the 25th pick of the 2019 draft, the Ravens added Marquise “Hollywood” Brown and his blazing speed to take the top off of defenses and take a catch for a touchdown on any given play. The cousin of Antonio Brown has flashed brilliance consistently and often. So much so, that he was the first wide receiver taken in the draft despite only weighing in at 166 pounds, and having a Lisfranc injury that required surgery. The combo of foot injury and small frame would scare away many GMs, but his speed and catch abilities are tantalizing as he will continue to develop alongside Lamar Jackson.  Hopefully the Ravens drafted a wide receiver more comparable in skill set to Tyreek Hill rather than John Ross.

Notre Dame's Miles Boykin was selected to fully revamp their offensive weapons. Miles was identified as a wide receiver with a high ceiling, but also seen as a project due to his limited production in college. Much of that limited production was attributed to the Notre Dame quarterback play.  So while Boykin’s highlight reel is not as robust as other picks in this draft, he showed key traits to be built upon.  At 6’4, 220 pounds, and with 4.42 speed there is a ton to work with for coaches, and these physical traits come with already good hands and an ability to get up and catch passes at their high point. Had he had a more prolific quarterback at Notre Dame, Boykin would more likely be a much higher pick in the 2019 draft.  For the Ravens who let go of Michael Crabtree, Boykin will slide in as an outside receiver and provide a big body for Lamar to target.

It should be noted that Hayden Hurst, the first round tight end taken in the 2018 draft, was banged up for much of the 2018 season due various injuries. Selected as the first tight end off the board in 2018, Hurst projects as a great blocking tight end with good hands, and his return for a healthy season adds yet another weapon for Lamar and another headache for defenses to have to account for alongside tight end Mark Andrews.

In 2018 Lamar Jackson never threw more than 25 times in a game, and is remembered for his inaccuracy, as he had just over a 58% completion percentage as a starter which would rank as 32nd in the NFL last year. Instead of a heavy pass volume, Lamar had many designed runs or opted to keep the ball and run after looking at his first read. And while I am not a Lamar apologist when it comes to his throwing, he did have an aged Michael Crabtree, Willie Snead, and John Brown as his top wide receivers with rookie Mark Andrews at tight end. I prefer to think that with the offensive weapons being revamped that Lamar Jackson’s passing game can’t get much worse.  To be fair, he was a rookie backup until Week 10 when he became the starter in an offense that was completely overhauled midseason to fit his skill set. Should Lamar’s passing improve that will further open up running lanes and allow the offense as a whole to take another step forward.

For fantasy purposes Lamar Jackson was close to a waiver wire darling as he was a viable starter especially in 4 pt passing touchdown leagues and offered a nice floor with no less than 15 points in 4pt leagues, and no less than 17 points in 6pt leagues. In 2019 he is currently being drafted as the QB19 in the 12th round according to fantasyfootballcalculator.com. Given that he is being drafted as a QB2 he presents the exact type of value that late round QB drafters are looking for. If you take his 556yard/7games and extrapolate that to 16 games that’s 1270 yards (with 2546 passing yards over 16 games), a number that any fantasy owner would be ecstatic to have as their QB2 given the hopeful development in his passing abilities combined with the new receiving options in Baltimore.

Mark Ingram is currently being drafted as the RB23 at the back of the 4th round in PPR leagues sandwiched between Phillip Lindsay and Kenyan Drake. Ingram represents a safe floor with low ceiling option at running back that would create stability for teams that go WR/WR to open their drafts. Being selected as a fringe RB2/3 Ingram has shown his ability in the past to thrive in a run heavy attack and wear down defenses while still catching a few passes per game. Once in open field Ingram is difficult to take down and should still have pop in his step.

The main concern for Ingram is what will happen with his touchdown total as Jackson should run in a few touchdowns on his own. However, these risks are baked into his draft cost as he should be a relatively high volume back that will be given goal line duties. Seen as a secure-to-low-end RB2 owners should feel comfortable that Ingram is a set and forget RB2 or high end RB3.

For those looking for a high upside running back in the late rounds, Justice Hill is being drafted as RB52 in the 12th round, and it’s possible that Hill has stand alone flex1 or flex2 appeal due to his explosive ability. Should anything happen to Ingram I would expect Hill to see an uptick in touches, but ultimately that Edwards would fill into the Ingram role. Gus Edwards, however, is going undrafted, and should definitely be on waiver wire speed dial if Ingram doesn’t look like his old bowling ball with knives self.

As I have said before I am not one to take rookie wide receivers in redraft solely because I think they take too long to develop and figure out the NFL. Despite the high NFL draft capital for Brown and Boykin, I still will probably not be touching them in redraft leagues this year, and view them only as late fliers even in keeper/dynasty leagues. However, their arrival should be a major boost for the offense as a whole by keeping defenses honest, and IF Lamar Jackson can take a step forward in his passing then these wide receivers could became viable flex assets. Best ball is definitely the type of league where I would be targeting Hollywood Brown with a late pick in the event that he is the Desean Jackson type.

My favorite target on this offense, and apparently much of FF Twitter, is second year tight end Mark Andrews. Despite having first Joe Flacco then Lamar Jackson as his quarterbacks, Andrews was still able to amass 34-552-3. While those numbers are nothing to gush over, he did in fact have a 16.2 yards per reception. Even more impressive, his yardage total was sixth best by a rookie tight end since 2000. These yardage totals were buoyed by a 74 yard catch and run TD and a 68 yard catch and run TD. That is the type of athleticism I am looking to target in a tight end if I choose to wait on the position. Currently, being drafted as the TE19 in the 14th round, he is a prime example of why I am willing to wait on tight end, especially in home leagues where his name will be lesser know.

Obviously, the optimism around the Ravens offense focuses on their ability to run the football, but if Lamar Jackson takes a step forward with his new weapons then there is a chance that many of the offensive pieces outperform their ADP. When taking a Ravens player in drafts think about the floor they offer with the potential upside and remember how late you are actually getting them in drafts.