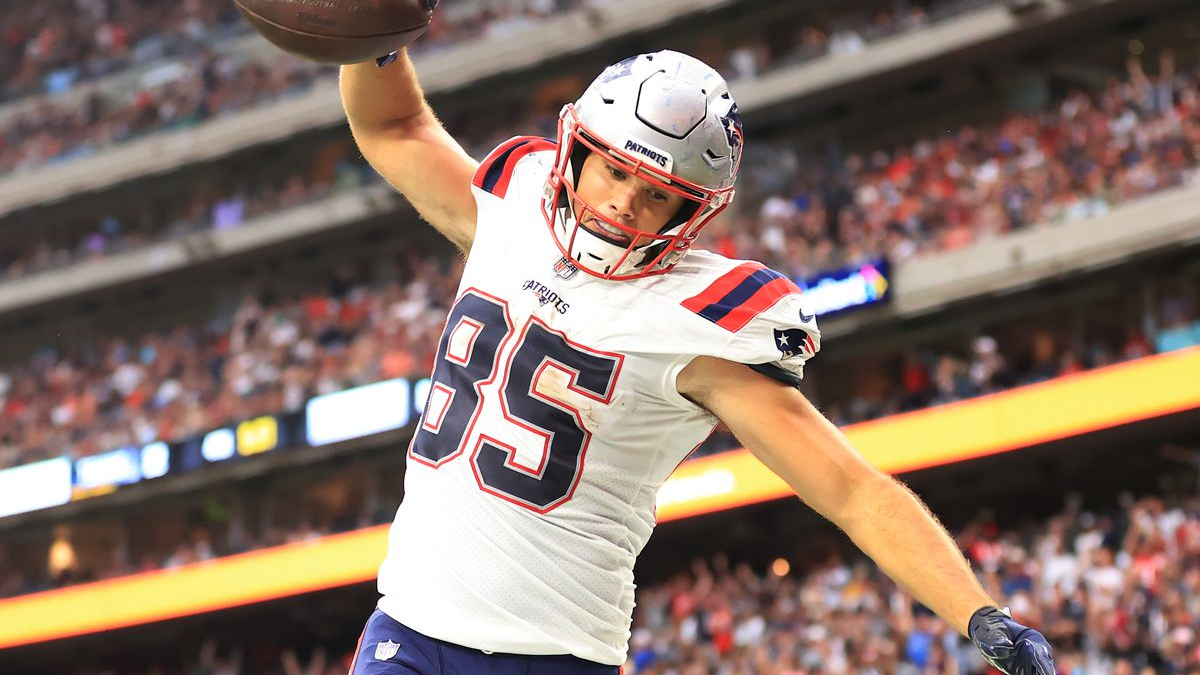 We’re full steam ahead into the post-season, and the Wild Card Round is serving up some tasty matchups! Instead of doing values, like I did in the regular season, I’m breaking down studs, duds, and values from each position. Let’s dive in!

Even in the absence of two of his receivers the last two weeks of the season, Tom Brady averaged over 29 points on DraftKings. The Philadelphia Eagles defense has improved over the course of the 2021 season, but they still exhibit significant weaknesses to tight ends. We all know who Brady’s tight end is, right? Brady also has the second-highest passing grade of any playoff quarterback behind Joe Burrow entering the playoffs. Tom Brady is wide receiver-proof, and I look for him to smash value this week.

It’s not that I don’t think this game will be a high-scoring affair; I just don’t think Jimmy Garoppolo will benefit from most of it. The Dallas Cowboys have only allowed 12.51 fantasy points to the quarterback position over the past four weeks, and they’ve only allowed 15.9 per game on the season. In contrast, Jimmy G is only averaging 17.2 fantasy points per game on DraftKings. Dallas also blitzes quite frequently, running a blitz on 26.6% of their defensive plays, and I expect a slightly higher percentage in this matchup. San Francisco is near the bottom of the league in both pass protection and run blocking, ranking 20th and 19th respectively, so I expect pressure early and often. Jimmy G may meet value this week, but there are better options available on this slate who have a much higher ceiling.

Matthew Stafford has struggled in recent weeks with interceptions, throwing multiple in each game the past three weeks. So why is he on my bargain list, you ask. First, Stafford has managed to reach value even with these interceptions with the exception of the Minnesota game. Second, this game is going to be close, with the Rams favored by four and an over/under of 49.5, so Stafford should have to throw a lot to keep the game close. In fact, I think Stafford ends attempting the most passes out of anyone on this slate. The Arizona Cardinals’ pass defense has also taken a dip, as they’ve allowed the fourth-most fantasy points to the quarterback position over the last four weeks. Stafford should be low rostered and is a great contrarian play this week.

Although Cooper Kupp is the leading receiver on the year, I’m fading him in DFS lineups due to his salary ($9,000 on DraftKings and $10,200 on FanDuel). For me, Tyreek Hill offers just as much upside at a salary of around $2,000 less in both formats. Hill operates all over the field, but 49% of his 2021 snaps have come lined up in the slot. If this trend continues, as we can assume it will, Hill will line up with Arthur Maulet a good portion of the game, and this matchup is just too good to pass up. Maulet is slow, with a 40 time of 4.62, making him no match for “The Cheetah’s” 4.34 speed. The matchups against Pittsburgh’s other corners are just as good, with neither of them running over a 4.5, so he should be able to exploit these corners anywhere on the field. My only concern with Hill is the lack of targets he’s seen since returning from the Reserve/COVID list. In Week 16 against the Pittsburgh Steelers, he only saw two targets, and he’s only seen 14 in the past three weeks combined. With this being a playoff game, however, I don’t think this trend continues. If you’re looking for a contrarian play on this weekend’s slate, Hill is your guy.

It’s a little difficult to predict who will shadow Christian Kirk this week, as the Los Angeles Rams tend to move their cornerbacks around, but my bet is on Jalen Ramsey. Ramsey is a true shutdown corner, ranking number one overall on the 2021 regular season according to PFF.com’s rankings. While Kirk has had an impressive season down the stretch, he’s not a match for Ramsey. In the two games against the Rams earlier this season, Kirk combined for four receptions and 91 yards for 13.1 PPR fantasy points. I know value is hard to find this week, but at this salary, you’re setting yourself up for disappointment.

Hunter Renfrow improved tremendously in his third year in the league, and in the absence of Darren Waller, he has carved out a role in this offense. 69% of his offensive snaps have been in the slot, so he will be shadowed by Cincinnati’s slot cornerback, Mike Hilton, the majority of the game. This season, Hilton has allowed a completion percentage of 72% and an average of 10 yards per reception. Conversely, Renfrow has a reception percentage of 83.1% and is averaging 10 yards per reception. The Raiders will most likely be playing from behind in this game, leaving plenty of target opportunity for Renfrow. He has a high ceiling in this matchup, making him a steal at this salary.

This one isn’t really going out on a limb, since he is the highest salaried running back on the slate, but Joe Mixon is set up to crush this weekend. Over the last two games of the season, Mixon averaged over 22 fantasy points per game, and this week he gets the Las Vegas Raiders. The Raiders are ranked 30th against the run on the season, and they’ve given up four touchdowns on the ground over the past four weeks. Cincinnati should get up on the Raiders fast, so I expect Mixon to get plenty of touches throughout the game. Mixon has also played a large role in the passing game, seeing 14 targets over the past two games, making him doubly enticing. I normally avoid playing the highest salaried player, but I don’t think there’s any way that Mixon disappoints.

You all know me as a Cowboys homer, but even I have to admit that Ezekiel Elliott has had a subpar season. I don’t think he suddenly corrects course against a 49ers defense that has allowed the fewest fantasy points in the league to the running back position over the past four weeks. Zeke has averaged only 45 rushing yards per game since all the way back in Week 6, so I don’t think his performance has been anomalous. It hurts me to say this, but I think Dak Prescott carries the day with his arm and Zeke is just a clock management piece.

This showdown in Buffalo against the New England Patriots is going to be COLD, and I mean COLD. The game will begin with temperatures in the single digits with wind chills down to -10 degrees. This is no recipe for passing success, so I expect both teams to run the ball heavily. What makes me lean Singletary over Damien Harris is a) his salary and b) the health of New England’s defensive line and linebacker corps. Rookie standout Christian Barmore is questionable, as are Dont’a Hightower, Lawrence Guy, and Jamie Collins. When he faced New England in Week 16, Singletary put up 18.8 points on DraftKings, and I can easily see a repeat of that performance, plus some. I’m all in on Singletary this week.

Travis Kelce is the obvious choice here, but if you’re looking to differentiate your lineup from the chalk, Gronk is sure to return value and then some. In the absence of Chris Godwin and Antonio Brown, Rob Gronkowski has become an even bigger focal point of this offense, putting up over 20 PPR points in the past two weeks. This week’s matchup against the Philadelphia Eagles is crazy good, so I see a good old-fashioned “Gronk smash” game incoming. The Eagles have allowed 14 touchdowns and over 1,000 yards to the tight end position on the season, and don’t see them improving in a week against one of the best in the business.

While he has proven to be a reliable option in the New England Patriots’ red zone attack, Hunter Henry has a tough matchup against the Buffalo Bills. The Bills have proven to be Henry’s kryptonite; in their last matchup, Henry only caught one ball on six targets for nine yards. In fact, the Bills have only allowed three touchdowns on the season to tight ends. It’s also going to be bitterly cold in Buffalo on Saturday night, with temperatures in the single digits at kickoff. That type of cold makes it difficult to trust in any pass-catcher, let alone a tight end against this defense. Henry is a hard fade.

While rookie Devonta Smith is the shiny new toy in the Philadelphia offense, Dallas Goedert is the reliable go-to option for Jalen Hurts. In Week 17, Goedert led the Eagles in target share percentage, commanding 28% of the team’s targets, receptions, and receiving yards. The only tight ends who commanded a larger target share on the season are the big three of Kelce, Waller, and Kittle. Goedert will be defended by Devin White, which isn’t the best matchup, but since the Eagles are going to be facing a negative game script situation throughout this game, I think Goedert should see plenty of targets and yardage.

There you have it! Are you fading the same players? Follow me on Twitter @Britt_Flinn and let me know!