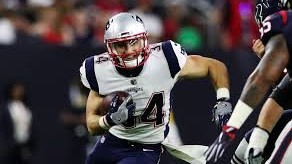 WE are getting down to the last few weeks in the fantasy football regular season, and yes, the waiver wire is still extremely important. There are a number of guys that we have already discussed in previous weeks that are coming back into play. If you watch either the Jets (on bye this week) you’ll notice that Elijah McGuire is running with extreme authority. I still think Bilal Powell is the best runner there, but McGuire certainly has some value. If you watched Seattle on Thursday, you saw that JD McKissic is also doing the most with the carries and catches he’s getting. He is showing agility and finishing off plays with authority. If Seattle is smart, this guy should get more touches.

Danny Woodhead should return this week for those of you in PPR leagues. If somehow he is still unowned you have to jump on that fast. Again, PPR formats especially. Washington’s Rob Kelley was placed on IR which gives the opportunity for Samaje Perine to get more carries. I’ve been unimpressed with him when I have watched, but shit it is Week 11 and he is a warm body who should get 15 carries. With the injury to Devonta Freeman, will Terron Ward get enough touches to be fantasy relevant? That I doubt, and would be a real dire situation for me to grab him. Same with Austin Ekeler for the Chargers. I know we are all pissed he took a couple of touchdowns again last week, but the late fumble he had I think ensures that we get our usual dose of Melvin Gordon next week. Ekeler’s production is too hard to predict for my liking.

With all of that being said, here are a handful of guys who I think can help you in Week 11 and beyond. This is Jamaal Williams chance to prove that he can be a lead back in the NFL. Will he take advantage of it? If I needed a running back, I'd give him a try.

Jamaal Williams, RB, Green Bay Packers. With Aaron Jones out for what seems like weeks, and Ty Montgomery unable to stay healthy with his rib issues, the door could be open for a little while for Williams to get his chance. Now, mind you he hasn’t always looked great this season, so it isn’t like you are grabbing him and getting Le’Veon Bell here. But half of success in fantasy football is opportunity, and Williams has his handed to him. He might even be forced into pass catching duties if Montgomery is forced to sit entirely. If you need a running back, Williams has the chance to be a 20 carry guy for the foreseeable future.

Rex Burkhead, RB, New England Patriots. Ahhhhhh, the Patriots backfield. One thing that drives fantasy football players to drink on a yearly basis. However, with Mike Gillislee being told to have a seat, and James White not being much of a factor, it looks like we have a mix of Dion Lewis and Rex Burkhead going forward. Many dropped Burkhead when he was out for multiple weeks due to an injury and you could have a great add here. Burkhead didn’t light up the stat sheet last week, but his ten carries and three catches with the touchdown are enough to keep you happy. He is involved running the ball as well as catching it out of the backfield and could be a big factor in the next six weeks. Grab ol Burkhead if you have the chance.

Dontrelle Inman, WR, Chicago Bears. While he isn’t the greatest receiver in the world, I’ve always kind of liked Inman. Buried in the depth chart for the Chargers, Inman did have some success when given the chance. He was just traded to Chicago, which is a land of no name receivers. While the Bears haven’t exactly been airing the ball out a lot in recent weeks, Mitch Trubisky did chuck it around over 20 times last week. Inman is easily the most talented receiver on this roster, and I think he can have an impact down the stretch in fantasy football seasons. It isn’t a sexy name, it isn’t on a sexy team, but I think Inman could finish the season strongly. The Dede Westbrook hype train has been in full effect the past couple of weeks waiting for his return. Will it start to pay off now?

Dede Westbrook, WR, Jacksonville Jaguars. The injury to Allen Hurns seems like it could last more than a week, and with news that Westbrook has been activated from the IR list has fantasy players excited. He was a beast at Oklahoma, and the fourth round pick had everyone’s attention in the preseason. I don’t know if we should expect a big breakout party in his first game, but Westbrook is a guy who could have a major impact in fantasy football as we enter the stretch run. If you are in a good position to make the playoffs and have a guy on your bench you don’t really want, Westbrook is the perfect add for you.

Russell Shepard, WR, Carolina Panthers. The Panthers are on bye this week, but the trade of Kelvin Benjamin followed by the season ending injury to Curtis Samuel means that Russell Shepard is bound to get more looks. He only had three catches for 40 yards last week, but that was with Samuel stealing the targets. I know that Greg Olsen is also due back, but I think that at worst Shepard is worth a bench spot. Cam Newton is putting up great numbers lately and I think this offense can support three fantasy worthy receivers each week.

Bruce Ellington, WR, Houston Texans. This one is a bit of a reach, but I wanted to put him out there. With Will Fuller dealing with cracked ribs, it could give Ellington a couple of weeks to be the number two receiver for Houston. I know that might not be saying much with Tom Savage at quarterback, but Savage isn’t as bad as Brock Osweiler or Drew Stanton. He can play a little bit. Ellington isn’t nearly as dynamic as Fuller is, but he isn’t a bag of dog crap either. If you are in a deeper league and everyone else above is owned, you might catch lightning in a bottle with Ellington. With emphasis on might.