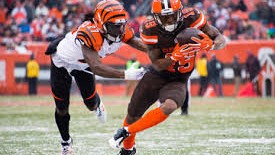 We are now to Thanksgiving week and that means that the fantasy football playoffs are almost upon us. We are in the final push for those crucial wins that will help you get into the second season. Bye weeks are now over, and we are all at a full complement of our rosters. However, with the rash of injuries that have occurred during the 2017 season, we all still need the waiver wire. This is the most important time. However, there weren’t a lot of injuries or opportunities that opened the door for new guys that we haven’t talked about before. So, this week I am doing a bit of a recap of players that I have discussed before who are still being owned in less than 50% of leagues. Here are a handful of players that I like.

Corey Coleman, WR, Cleveland Browns. I mentioned him last week, and while he was owned in only 20% of leagues, but he is going to be picked up in A LOT more after his six catch, 80 yard performance on Sunday. The Browns offense sucks, Deshone Kizer hasn’t proven to be a viable NFL quarterback yet, but Coleman is a physical freak, and is certainly someone who could have a huge impact down the stretch. He would be my number one priority if you need a wide receiver.

It has taken over a season and a half but it finally seems like Josh Doctson is ready to live up to the hype!

Josh Doctson, WR, Washington Redskins. It has taken a  while, but it appears that the Redskins are finally going to make fantasy players happy and start to make Doctson a bigger part of the offense. He caught four passes for the second straight week, but certainly seemed to be much more of a focus than in the past. He had a season high 81 receiving yards, and somehow he is only owned in 30% of ESPN leagues. This is your last week to get him as I expect that number to skyrocket so if you need a receiver I’d act now.

Samaje Perine, RB, Washington Redskins. It is a survival of the fittest in the Redskin backfield as a week after they put Robert Kelley on IR, Chris Thompson broke his fibula and will miss the rest of the season. This leaves Perine as the last viable running back on the roster and he took advantage of his opportunity with 23 carries for 117 yards and a touchdown. I’m not saying that I am all crazy about him, but he will be a starting running back for the rest of the year, so on volume alone he has value.

Dede Westbrook, WR, Jacksonville Jaguars. He might not have exploded the box score in his first game, but really did you expect that? Westbrook was targeted six times, and had three catches for 35 yards. He was ripped off by a review call that would have given him his fourth reception. I am assuming that Allen Hurns will continue to miss time, and I think that Westbrook is the second most talented healthy receiver in Jacksonville. While some people were disappointed, I saw a lot to be happy about in his first game and look for better things ahead for Westbrook. Devontae Booker looks to be running away with the main running back role a little bit more each week.

Devontae Booker, RB, Denver Broncos. Hopefully you acted the first time that I mentioned Booker, but if not, there still might be time, but I think this will be it. Booker had 14 carries to CJ Anderson’s 13, and he had five catches in the passing game. He certainly has been gaining more and more of a role from week to week, and expect that to continue. Barring an injury to CJ Anderson I don’t know that I see Booker getting more than 15-16 carries in a game, but I expect him to be more efficient and a bigger part of the passing game going forward than Anderson.

Bruce Ellington, WR, Houston Texans. Will Fuller continues to have less of a role with Tom Savage at quarterback. Fuller also missed a game with injured ribs, which gives Ellington more of an opportunity to be the number two receiver in Houston. He certainly has a solid rapport with Savage, and I think he will continue to do just enough to keep some fantasy value.

Zay Jones, WR, Buffalo Bills. There was a lot of hype surrounding Jones in the preseason and he turned out to be a colossal bust over the first two and a half months of the year. All of a sudden though in the last two weeks he has been active, Jones has woken up. In his last ten catches for 121 yards and a touchdown combined. Hopefully the Bills are smart and continue to start Tyrod Taylor, and if they do, Jones could have some value in the last month of the fantasy regular season.

Kenny Stills, WR, Miami Dolphins. This one is entirely contingent on Jay Cutler missing time with the concussion. Stills and backup quarterback Matt Moore seem to be completely on the same page. Stills had one freakin catch in the first half with Cutler at quarterback and then exploded for six and 154 after halftime with Moore under center. This isn’t the first time he had huge numbers with Moore and if Moore will continue to start, Stills should continue to have value.