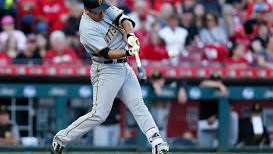 The season is only a few days old, and I’m sure many of you are already cursing your teams and your drafts, and your friends, and neighbors, and boss, and cat, and whoever else that might be in front of you that is causing your fantasy team to SUCK out of the gate. As always, we encourage patience early on, but if you just can’t wait to cut someone’s ass, let me suggest the following guys to pick up.

Pete Alonso, 1B, New York Mets. After smashing 36 home runs in the minors last season, Alonso was openly upset he wasn’t called to the Majors last September. Well, he gave the Mets no chance but to bring him to the Majors this season in the Spring. People are concerned about Alonso’s ability to hit for a decent average and his strikeout rate. However, you aren’t going to find this kind of power anywhere, and the fact he’s only owned in less than 60% of Yahoo leagues and less than 40% of ESPN leagues is crazy. He had three hits on Saturday and drove in two runs. If you can just pick him up off the waiver wire, I think that is the ultimate jackpot.

Enrique Hernandez, 2B, Los Angeles Dodgers. A multi-positional gem, Hernandez won the second base job in Spring Training, sending Chris Taylor to the super utility role. Hernandez showed the decision was a good one with two home runs on Opening Day. He had 21 home runs in just over 400 at-bats in 2018, and while I’m not saying he is going to hit 30 this year, but a guy who could hit 20 homers that plays all over the middle infield and outfield could be a great utility guy on your fantasy roster and is available in about half of leagues across the major sites.

Jung Ho Kang, 3B, Pittsburgh Pirates. It has been a couple of years since Kang even played in the Majors, and pretty much everyone wrote him off. However, he burst back on the scene in a major way leading Spring Training in home runs. Currently owned in a third of Yahoo leagues, less than 10% on Yahoo and 57% of leagues on Fantrax. Kang hit 36 home runs between 2015-2016 so he certainly has some solid power ability. Third base isn’t exactly the deepest position on the diamond, which definitely means Kang has some value if you need any help there or at corner infield.

Tim Beckham, SS, Seattle Mariners. The former number one overall pick burst back on the fantasy radar in 2017 with 22 home runs, and followed it up with an injury shortened, but decent 2018. Well, he is off to a TORRID start to 2019, and he is someone you have to at least consider if you need help at middle infield. He already has three home runs and six RBI, and while that pace obviously can’t continue, he is looking like he could be in for another solid season.

Ryon Healy, 1B, Seattle Mariners. Healy has always been a guy that I have liked since his rookie year in Oakland, but he never seems to get widespread love in fantasy. I get it, he never really hits for a high average, but I do think his .235 average last year will be the lowest of his career. He has hit 49 home runs combined in the last two seasons, and he is already off to a great start in 2019, with five doubles, two homers and 6 RBIs. First base isn’t incredibly deep and a lot of leagues require corner infielders as well. I like Healy, just don’t expect .300/30/100 and you won’t be disappointed.

Julio Urias, SP, Los Angeles Dodgers. Given the injuries to the Dodgers pitchers, Urias will start in the rotation. He had a fantastic Spring with an ERA under 2.00 and 15 Ks in 15.2 innings. This kid has electric stuff, but has had a hard time staying healthy. Urias has been one of the top pitching prospects for the past couple seasons, and this will be his best opportunity to succeed. Of course there is a concern about an innings limit, but that’s nothing to worry about in late March/early April. He is slated to start on Monday so pick this kid up now and ride the wave.

Corbin Burnes, SP, Milwaukee Brewers. He might not have won his first start in 2019, but he was impressive nonetheless. Burnes allowed four runs, including home runs to Matt Carpenter, Paul DeJong, and Paul Goldschmidt (no shame in any of those) in a loss to St. Louis. However, his stuff was incredibly impressive and he struck out 12 batters in just five innings. I do think that there will be some ups and downs with this young pitcher, and I think you can look into his Spring Training stats to see what I mean. He struck out 26 guys and walked just four in 22 innings which is awesome, but it came with a 4.84 ERA, which obviously isn't good. Right now, Burnes looks like one of the better young pitchers in baseball, not on the elite level  of the top, top prospects, but definitely someone can help your fantasy team.

Caleb Smith, SP, Miami Marlins. Smith isn’t a young prospect, but he has shown some promise, especially with strikeouts. He did suffer a lat strain early in Spring, but when he came back he pitched exceptionally well in two of his three starts. Sure, the Marlins are going to suck, but Smith has some nice potential and won a spot in the Marlins rotation. There is some risk involved here with Smith, but he’s a nice early season pickup.

Brandon Woodruff, SP, Milwaukee Brewers. Woodruff has struggled some in his time in the Majors, but the Brewers are now one of the best team in the National League, and Woodruff had a great Spring. He had a 2.55 ERA with 26 strikeouts in just 17 Spring innings, which got him a spot in the rotation. Woodruff picked up the win in his first start against the Cardinals, giving up two runs over five innings and striking out five. He isn’t an elite up and coming young pitcher, but Woodruff should have some value at the end of rosters in even 12 team leagues.

Pablo Lopez, SP, Miami Marlins. Lopez just turned 23 years old, and he has shown some ability in the Minors and his short stint in the Majors last season. However, he has picked up a few miles per hour on his fastball, and had a really good Spring. Lopez pitched pretty well in his first start, allowing three runs over 5.1 innings against a good offense in Colorado. He is an intriguing pickup if you are in need of early season pitching help.

Yonny Chirinos, SP, Tampa Bay Rays. The young hurler had some success last season, won a spot in the rotation and then the most of his chance when he beat the Astros on Sunday. Chirinos gave up one run and didn't walk a batter while striking out six against one of the better lineups in baseball. He doesn't have elite level strikeout stuff, but he still knows how to miss some bats, and I think the Rays will be better than many expect this year. I don't think his ceiling is as high as some other young hurlers, but Chirinos could possibly be a guy that could stick in your fantasy rotation.

Marcus Stroman, SP, Toronto Blue Jays. This one is tough. I really liked Stroman a couple of years ago with his 3.09 ERA. He isn’t a great strikeout pitcher, but there is some talent there. He was fantastic in his first start this year, although the four walks are a concern. Stroman will never be an ace, but he could be a guy who has some value at the end of your fantasy rotation. He is on a bad team and is in a tough division, but Stroman certainly has some talent.