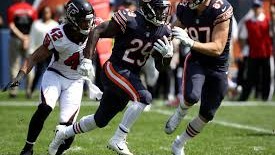 Week 1 is in the books, and damn it, it was so great to be watching football again! For those of you who started 0-1, don’t sweat it, your team will still be ok. And for those of you who started 1-0, don’t rest on your laurels, you always have to look to improve the roster if possible. With all of that said, let’s take a look at who might be available on your waiver wire to help you for Week 2.

Tarik Cohen, RB, Chicago Bears. Jordan Howard was a top 15 pick in all fantasy leagues, but it was rookie Tarik Cohen stole the show in Week 1. He had five carries for 66 yards, including a 46 yarder. He also had eight catches for 47 yards including a 19 yard touchdown on a wheel route. At 5’6” he might be the smallest guy out there, but he is really fast, and has extremely shifty feet. Howard will continue to be the man in the offense, but it certainly looks that Cohen will have a role. His size concerns me as he could be one big hit away from an injury, but he looks really hard to take down, and on a Bears team without a lot of playmakers he will be one of the hotter adds in waivers this week. Goff got off to an awesome start and looks like a guy worthy of the #1 overall pick so far in 2017.

Jared Goff, QB, Los Angeles Rams. The Rams were incredibly impressive in their first game, although it was against a bad Colts team without Andrew Luck. Goff was very efficient with 21 completions in 29 attempts and he starts the season with a 300 yard game. He may have only had one touchdown, but Goff is a guy that I think will improve as the season goes on. I think he has a chance to be among the top 12 fantasy quarterbacks before season’s end, and if you haven’t grabbed a backup quarterback he could be the guy you need to grab.

Buck Allen, RB, Baltimore Ravens. With the way they held down the Bengals offense today, the Ravens may have run more than they will during the year, but Terrance West and Buck (Javorius) Allen nearly matched him carry for carry. West was a little more efficient, but they were very similar. If one of the Ravens running backs are going to be more involved in the passing game it will be Allen, and if Danny Woodhead is forced to miss time, Allen could be a nice pickup.

Jermaine Kearse, WR, New York Jets. The Jets pathetic offense looked pathetic on Sunday against a decent Bills defense. With all of the changes on the offense, it was going to be a question of who would be the top receiver for quarterback Josh McCown. Through one week that is definitely Jermaine Kearse. The former Seahawk receiver caught seven passes for 59 yards without a touchdown. Like the rest of the Jets’ offense he probably won’t score much, but in PPR formats it looks like Kearse is the guy to own in the Jets receiving corps. A popular deep sleeper in August, Golladay proved that the hype was worth it with his big game on Sunday.

Kenny Golladay, WR, Detroit Lions. Some were worried when the season started that there wouldn’t be enough targets for Golden Tate, Marvin Jones, Eric Ebron, Theo Riddick AND rookie Kenny Golladay. As I expected, the Lions had a hell of a time running the ball, as they did nothing to improve their RB situation. That caused Matthew Stafford to have to thrown the ball 40+ times which is becoming customary. Golladay showed that he had what it takes to earn the trust of quarterback Matthew Stafford with four catches, including two touchdowns. One score was an impressive diving catch, and he looks like the real deal. If you need wide receiver help, Golladay looks like a great choice.

Nelson Agholor, WR, Philadelphia Eagles. The Eagles brought in Torrey Smith and they brought in Alshon Jeffery, but it was Agholor that stole the show on Sunday. Zach Ertz and Darren Sproles were also heavily targeted, but Agholor was the highest targeted wide receiver. Most of his yardage did come on a long touchdown, but he still did have six catches. I’m a little skeptical of his long range fantasy value, but after one week he looks like he is worth consideration.

Deshone Kizer, QB, Cleveland Browns. I watched a lot of the Browns game on Sunday, and I have to say while the result wasn’t what they wanted, I did like what I saw from Kizer. Pretty poised, decent arm, and he definitely didn’t look overwhelmed by the moment. I don’t ever see him as a QB1 in 2017, but Kizer looks like between his arm and his legs he could be a quarterback that could help you in the short term if you have an injury at your starter.

Deshaun Watson, QB, Houston Texans. It didn’t take long for Tom Savage to look overwhelmed as he took more sacks than a two dollar hooker. The Texans were wise and brought Watson in during the first game. His first drive resulted in a touchdown, and while that was the only score he led, clearly Watson is the best choice for the Texans. He has the tools to be a success in the NFL, and if Houston is smart they will start him in Week 2. He won’t be a QB1 this season likely, but he will have fantasy value.

Jesse James, TE, Pittsburgh Steelers. My buddy Ron is a lifelong Steelers fan and was really mad at me that I didn’t include Jesse James in my top 20 tight ends before the season started. James made me look like an ass when he had six catches and two touchdowns against the Browns on Sunday. He still isn’t someone I would start at tight end, but he could be worth a roster spot in deeper leagues. Pittsburgh has often thrown at their tight ends, and James is a good red zone target, I’m just not sure he will see enough consistent targets to be a regular fantasy starter.