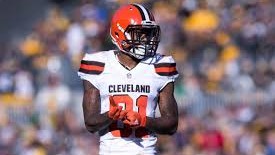 Another week, another group of injuries. The NFL is a dangerous place and will always be sending you to the waiver wire. We had a bunch of players who came into the forefront and now hold some fantasy relevance. Here are the ones I think can help you. Chris Carson, RB, Seattle Seahawks. The preseason was filled of who would lead the Seattle backfield. Would it be Thomas Rawls, Eddie Lacy, or CJ Prosise. It wasn’t until mid to late August where more and more people were tuned into rookie Chris Carson. If you watched the game on Sunday you would not only see that Lacy was a healthy scratch, but you’d also know that in the second half, Carson owned the offense. Not only did he run the clock out for the Seahawks, but he was shifty, elusive, and brought a lot of energy. The offensive line might not be great, but if I had to own one running back in Seattle, it would definitely be Chris Carson.

Samaje Perine, RB, Washington Redskins. Apparently Fat Rob isn’t fat enough to cushion his midsection, because he left a game with a rib injury. There is no timetable for how long he might be out, but the rookie Perine did ok with 21 carries and 67 yards. The yards per carry is not impressive, and he won’t be involved in the passing game, but if you lost Kelley or just need a running back he should get plenty of volume.

D’Onta Foreman, RB, Houston Texans. If you watched the game on Sunday night you could see that Lamar Miller got more touches for the Texans, but Foreman had more energy, ran with more power, and also was shiftier. Foreman had 12 carries to Miller’s 18, but if he can continue to eat in to Miller’s role, Foreman could be more of a factor. The only issue is Miller is more involved in the passing game, so while Foreman might take a few weeks to get more of a role, I still think he has a chance to be the workhorse in the next handful of weeks.

Rashard Higgins, WR, Cleveland Browns. The former fifth round pick from Colorado State, Higgins dominated at times at the college level. With Terrelle Pryor out of town, and Corey Coleman now missing time with a broken hand, Higgins has a chance to shine. He had seven catches for 95 yards last week, Higgins even played more snaps than Kenny Britt last week. If you need a receiver this week, Higgins looks like he could be the guy to own.

JJ Nelson, WR, Arizona Cardinals. With the quad injury to receiver John Brown it has opened up the door for Nelson to be the number two receiver and Jaron Brown to be the number three. Larry Fitzgerald is certainly owned, but Nelson is widely available. He likely won’t be after his 5/120/1 game against the Colts on Sunday and John Brown likely ruled out for Week 3. Nelson is a great waiver claim headed into the coming week.

David Njoku, TE, Cleveland Browns. He may just have five catches for 57 yards through two games, but I saw Njoku being targeted near the end zone in Week 1, and then last week he caught his first NFL touchdown. So he probably won’t be a guy you want to pick up if you are looking for high impact in Week 3, but as a backup on your roster with some great upside in the next month or so, I really like Njoku if you can afford to stash him until he finally passes Seth DeValve on the targets. He is a great athlete with good hands. It is just a matter of time before he is the main guy at tight end for the Browns.