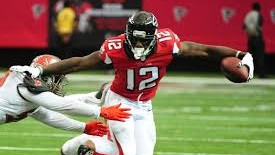 The waiver wire sucks this week. I mean there are still guys out there that we have previously mentioned like Jared Goff and Chris Carson. Chris Thompson had a great game, but he really is owned in too many leagues to mention. On the flip side there are guys that played well that I don’t believe in enough to suggest to you. Travis Benjamin was very good, but he is still third on the receiver depth chart and too inconsistent. Adam Humphries was great, but the Bucs were so far behind that I don’t think he will be that good very often. Taylor Gabriel is close, but there’s another Falcons receiver I like a little more. Here is a short list of guys I think can help you for Week 4.

Paul Richardson, WR, Seattle Seahawks.  Doug Baldwin is still the number one guy, and Jimmy Graham is certainly the second target on the team. However, there isn’t a set third target, but if I had to choose one it would be Richardson. He may have only had two catches on Sunday, but he was targeted seven times, and he has scored a touchdown in back to back weeks. The Seahawks offense is going to struggle some this year, but Richardson will be enough of a fantasy factor that he definitely deserves to be on rosters.

Mohamed Sanu, WR, Atlanta Falcons. Julio Jones is obviously the man in Atlanta, but there has to be a number two receiver. For the last few years there really hasn’t been a consistent second option. So far, through three weeks it looks like Sanu is going to be an every week performer. He may have only had 28 yards last week, but his first touchdown gave him the points he needed. He is likely not an every week starter, but I think there’s a decent chance he’s better than the last receiver on your roster. Austin Seferian-Jenkins appears to have a new commitment to football and could help your fantasy team down the stretch.

Austin Seferian-Jenkins, TE, New York Jets. ASJ has had a rough beginning to his career, between fighting with coaches, injury problems, and personal demons, he has never lived up to his potential. However, he has cleaned his life up, rededicated himself to football, and looks like he is ready to be serious. I saw him make a few catches that tight ends don’t normally make on Sunday. He is a great athlete and has very good hands. The Jets are dying for a consistent, reliable receiver, and I think ASJ is that guy. He didn’t have a lot of yardage, but his five catches in his first game on a new team is very encouraging. If you have a spot on your roster for another tight end, I love this guys chances of making an impact coming very soon.

Orleans Darkwa, RB, New York Giants. The New York run game is so pathetic. Watching them try to run the ball is like watching a teenager fumble trying to get a girl’s bra unhooked on prom night. It’s painful. Paul Perkins was the consensus go to back during draft season this year, but he has done NOTHING to instill any confidence that he is going to succeed. Now, Darkwa didn’t do great either. He did have a 20 yard run, but if you see his final line he had 22 rushing yards on seven carries. So that means the other six carries he gained two yards. However, every fantasy team is always looking for depth at running back, and if you have an injury or a roster spot you could use and hope someone improves in the future, Darkwa might not be a bad choice. I think in the next week or two he will be the guy who gets the most carries, and I also think that the Giants will find a way to scheme so they can run the ball better. I’m not saying he’s going to be Kareem Hunt, but if you are in desperate need for running back depth, Darkwa might not be a bad dark horse choice.

Geronimo Allison, WR, Green Bay Packers. With Randall Cobb out, Allison certainly took advantage of his opportunity to be the third receiver on one of the more dominating offenses in the game. He had six catches for 122 yards, including the big one that set up the winning field goal. Cobb’s injury doesn’t appear to be serious, but the Packers do have a short week playing on Thursday so Allison could have another solid opportunity. Jordy Nelson is also banged up so there are two Packer receivers who are an injury risk right now. When given the chance to be in the top three, Allison is a solid fantasy play.

Jacoby Brissett, QB, Indianapolis Colts. There’s a chance that Andrew Luck might be ready for Week 6, but I’m not counting on that just yet. But Brissett showed that there could be some hope in Indy, and talked T.Y. Hilton owners off of the bridge as the Colts offense actually looked like a pro team for a week. I know it was against the Browns, but their defense isn’t horrible. Brissett’s ability to run the ball (two rushing touchdows on Sunday) gives him added fantasy value. And while he certainly won’t crack the top twelve, for the next few weeks (and maybe more if Luck is worse than they are letting on), Brissett could get you over and get you some decent points.