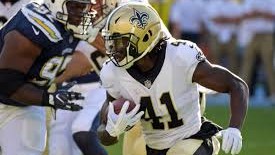 The running back landscape kind of went on its side this week, so I thought I would dedicate the entire waiver wire article this week to running backs. It is the position with the most injuries and the most turnover during the year, so here are a handful of guys who can help you out if you are in need of help at running back.

Alvin Kamara, RB, New Orleans Saints. The Saints backfield is a complete disaster as they don’t run the ball enough to keep anyone fantasy relevant, and now they are splitting the carries between Kamara, Ingram, and Adrian Peterson. However, Kamara is easily the guy with the most fantasy value because he is incredibly involved in the passing game. He might not match his ten catches from this week’s game against the Dolphins, but if you watch the Saints, Kamara is by far the most energized and shifty back they have. If I own anyone in the Saints backfield, it is going to be Kamara.

Latavius Murray, RB, Minnesota Vikings. Dalvin Cook sadly tore his ACL and is out for the season, and now the Vikings big free agent signing will have to come through. They still have Jerick McKinnon, but he had plenty of opportunities to shine last year and failed. I’m not a huge fan of Murray, but if he can stay healthy he could at least be serviceable. He is also a good pass receiver out of the backfield so in PPR leagues you could possibly do worse. Wayne Gallman definitely has the talent to be successful, but will his offensive line show up enough to open the holes for him?

Wayne Gallman, RB, New York Giants. Last week I mentioned Orleans Darkwa, but he was injured and didn’t play in Week 4. Taking his place, and perhaps permanently, was rookie fourth rounder Wayne Gallman. He certainly looked like the most talented and elusive back for the Giants this season, and even scored a touchdown in his first game. At six foot and 210 pounds, Gallman isn’t easy to take down, and is a decent pass receiver out of the backfield. I truly believe that Gallman has a chance to take the job and run with it. The problem is the Giants don’t have a great offensive line and might not be able to take advantage of his talent.

Alex Collins, RB, Baltimore Ravens. After Week 3 on the podcast I said that Collins had no real value because all of his production came after the Ravens were getting their asses kicked in London. Well, the Ravens did lose again this week, but not as dramatically, and Collins was again the best producer in the Baltimore backfield. He had another solid game because of a long run, but Collins does appear to have the most energy and boost out of any back on this roster. I’m still not 100% sold on Collins, but if the Ravens want to give the most explosive guy on the roster a shot, they will continue to feed Collins. Unfortunately, the defense is really bad, and the Ravens are generally behind. Temper your expectations, but Collins looks like he could be the guy.

Andre Ellington, RB, Arizona Cardinals. The Cardinals run game is a mess without David Johnson, and it is kind of a committee approach. It appears that Chris Johnson is going to get the majority of the rushes, but Andre Elllington is going to be the passing down back. So, if you are in a PPR league, it might be Ellington to own. He had nine catches on Sunday, and while that not be a realistic expectation, even if he catches five or six he will have some fantasy value.

Aaron Jones, RB, Green Bay Packers. Ty Montgomery left with a chest injury and shortly after Jamaal Williams injured his knee and Alex Jones had his opportunity. And while 49 yards on 13 carries isn’t something to pop the champagne over, it isn’t a bad debut and the touchdown run made it even better. However, it doesn’t appear that Montgomery’s ribs are as bad as expected, so Jones now looks like a short term, maybe even a one week add. Rib injuries are easy to reaggravate, so Montgomery could go down again. Definitely keep Jones on your radar as a possible replacement.