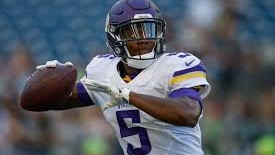 The waiver wire for Week 7 isn’t going to be anything exciting. There isn’t going to be a guy that everyone is after. I’m hoping that you are in a league where guys we have mentioned before like Orleans Darkwa, Marlon Mack, and Alex Collins are still available. They are your top priority. Also, although his team is on bye this coming week, don’t sleep on Kenny Golladay in Detroit, as Golden Tate is set to miss multiple weeks due to injury. If those guys are gone, look at the guys below to see if they can help your squad.

Teddy Bridgewater, QB, Minnesota Vikings. Bridgewater has been cleared to practice after his scary leg injury, and the Vikings can’t get him back on the field fast enough with Sam Bradford injured (and sucking), and Case Keenum not being very good. It might take a couple of weeks before Bridgewater is ready to start, and he could be rusty, but if you have an open spot and can stash this guy he could pay nice dividends down the stretch and perhaps in the fantasy football playoffs.

John Ross, WR, Cincinnati Bengals. The speedy Bengals rookie appears that he is getting over his knee injury and is back to practice. The Bengals envisioned him making much more of an impact in his first season, but however, if he can stay on the field maybe that will happen. With only A.J. Green offering any sort of production at wide receiver, perhaps Ross can work himself into a meaningful role in the next few weeks. He is a stash and hold kind of pickup.

C.J. Beathard, QB, San Francisco 49ers. The leash on Brian Hoyer finally ran out, and third round pick Beatheard was given his shot Sunday against the Redskins. While the team lost another game by three points or less, I think that they have their guy for the rest of the year. Beathard has some growing pains to go through, and tends to hold on to the ball in the pocket a little too long, but he definitely has talent. I would hold off on adding him unless you are in a two quarterback league, and right now he would still probably just be depth there. But through one game I like what I saw, and I think Beathard can be a guy who could get you through a couple of weeks if your starter goes down. He might not be a diva receiver, but Robert Woods is slowly putting together a pretty decent season.

Robert Woods, WR, Los Angeles Rams. The Rams passing game hasn’t been as strong the past couple of weeks, but Robert Woods has continued to be fantasy relevant. He has five catches or more and 65 yards or more in three of his last four games. Cooper Kupp has fallen off and Sammy Watkins has been incredibly inconsistent as usual. Somehow Woods is only owned in 12% of ESPN leagues, and if you have any need for a receiver consider looking Woods way.

Bennie Fowler, WR, Denver Broncos. Emmanuel Sanders’ ankle injury looked fairly gross, and while he avoided serious injury, I expect him to miss at least a couple of weeks. This will push Fowler into starter duty. With the limitations of Trevor Siemien, I don’t expect Fowler to challenge 100 yards receiving, but I think especially in PPR formats that Fowler will carry some value while Sanders is injured.

Dion Lewis, RB, New England Patriots. Mike Gillislee came to New England to be their lead back, but after four touchdowns in the first two weeks, Gillislee broke 50 yards just once in the last four games and that was only 52 yards. He made matters worse by fumbling on Sunday. This opened the door for Lewis, who scored for the second time this season. I know it is impossible to trust a Patriots runner so this is only if you are looking for depth, but if Gillislee gets in the doghouse any more, Lewis could be in for 15+ carries.

Adam Humphries, WR, Tampa Bay Buccaneers. I’ve been debating on putting Humphries into this article for a couple of weeks, and finally this week he makes it in. He isn’t going to win you any league, but if you are in a PPR format, Humphries will help you get through this bye week period. He might be the third option on the team, but he has six catches in three of his last four weeks and has topped 50 yards in four straight games. If you are in dire need of wide receiver depth, you can do worse than Humphries.

De’Anthony Thomas, WR, Kansas City Chiefs. Tyreek Hill is being evaluated for a concussion, Albert Wilson was unable to play on Sunday, and Chris Conley remains injured. After Travis Kelce, Alex Smith is going to have to throw to someone. Thomas had three catches for 61 yards and a touchdown, which leads me to believe that Thomas has a chance to get the most targets. With the Chiefs having a quick turnaround and playing Thursday, it doesn’t leave much time for the injured to get well, which means Thomas could be in for a good game.